Even Lumberjacks Deserve Lotion: Gender in the Locker Room

On weekdays around lunchtime, I head across the street from my office to the gym. It’s a New York Sports Club, which means most of the women in the locker room are white, skinny, tweezed and plucked all over. I feel like a lumberjack when I walk in there, all hairy, crewcutted and booted among the naked women with white towels wrapped around their heads. I haven’t shaved my legs since I was 15. I try to hulk my way as invisibly as possible to a small alcove, where I find some semblance of privacy to change in all my lumberjack beauty.

One day a woman calls out to me while my binder, a tight vest I wear every day to flatten my chest, is pulled halfway over my head, my armpit the current victim of its compression.

“Excuse me,” she says, in a sharp Jersey accent that makes the second word sound more like a spring month than a pronoun.

I’ve been caught. I’ve been preparing for this moment ever since I started coming to this gym months ago. Every time I enter the locker room I hunch my shoulders like a trespasser, as though at any moment a security guard might find me and guide me out by the scruff of my neck.

Now it’s happened. Soon staff will arrive, and all I can hope is that by the time they do, I’ll have some clothes on. I’ll show them my ID with its unequivocal ‘F’ and they’ll realize the mistake, apologize even. Undoubtedly this Jersey woman will, too, flustered as she explains that she normally wears glasses / it was the steam from the shower / her best friend is gay / and on, and on. But then they’ll take me into their little glass-walled office facing the stretching area, and they’ll explain that it would be best if I changed in a private bathroom from now on. Just more comfortable for everyone that way, they’ll say.

I don’t turn around yet. I stare at the wall of lockers in front of me, arms still tangled in the vise grip of my binder. In my highest-pitched voice, I say:

I pause. Take this in enough to say, “Give me a minute” with all the authority of a middle school kid sitting at her mom’s desk at work. Then I wrangle my binder onto my chest, pull a T-shirt over my head, and join her on the bench. She’s wearing only a towel and she’s prattling on about her lock, how I need to open it for her, how if I don’t, she’ll have to get them to cut it off, and she doesn’t want to lose this lock, she loves this lock.

Why? I think. It’s one of those crappy tiny ones with a key, the kind that comes attached to luggage as a kind of vague nod towards security and breaks on its first encounter with baggage handlers. But I fiddle with it for a while as my own vague nod towards helpfulness, until finally I say, “I’m sorry, I can’t get it out.” She barely looks up when I walk away and I leave her on the bench, hopelessly tugging at her inexplicably precious lock.

I take my encounter with the ungracious broken-lock woman as a sign that maybe I am more welcome in this locker room than I thought I was. Or at least, less shockingly out of place.

Sometimes when I come back to the locker room after my workout, the same women are still standing in front of the floor-to-ceiling mirrors, naked and perching one foot at a time on the bench to lotion every gleaming inch of leg. I don’t go that far, but I do start to linger for a few moments in my underwear. A couple times, I even go to the mirror in the middle of the locker room to tuck in my shirt and adjust my collar. I like the way I look in this mirror, dressed in my favorite dark jeans and black captoes, face still slightly red from my run.

A few weeks later, I’m in a bathroom stall when I hear a woman say that she thought there was a guy in here. He must be gone now, she says, because she doesn’t see him.

I recognize this woman’s voice. She works at the gym. I’ve often seen her as I hustle around the locker room, avoiding eye contact but noticing her nonetheless. I sit in the stall and wait. When I’m sure she’s gone, I wash my hands and walk quickly out of the locker room.

Once, many years ago in Ditmas Park, a tall man stood too close to me as I was locking the door to my car. He was easily my father’s age, and he wanted to know: was I a boy or a girl?

“None of your business,” I told him. But he kept asking me, over and over, and his voice was angry, like I’d done something to him. I walked away from him, saying “fuck off” over my shoulder at a volume that I hoped was quiet enough to be safe, loud enough to risk being heard.

I bought my first pair of boxers when I was 14 years old. When I put them on and faced the mirror, I felt the same kind of pure flush you feel when something really good happens: when you reach the summit of a hike and turn around to look at the view; when the person whose dimples you’ve been admiring for weeks one day reaches for your hand.

Though the word we traditionally use to describe that feeling is “joy,” I’d propose another phrase: “without shame.”

There is some disconnect here.

My parents raised me to believe that my boy-girl self was beautiful and natural. I got a crewcut and began to wear men’s clothes when I was 15 years old. It was the single most self-loving—and easy—thing I’ve ever done. Nothing has ever felt more right.

And yet, 13 years later, I find myself scuttling around the locker room like a pathetic bug fleeing from an all-powerful human boot. More than my body, I’m ashamed of my shame. Who taught me to be so self-hating?

One of the most shameful memories of my early childhood is the repeated moment—in my mind, it happened just about every week, and sometimes more frequently—in which another small child within my earshot would tug on their mother’s hand and ask, unabashedly:

I’ll probably never be able to put words to that feeling, but I don’t think I’ll ever forget it, either: the shoulder-tensing, stomach-roiling sensation that made me want to shrink into my own skin and body-slam my own tiny child’s frame into the ground until I became someone else. Embarrassment is probably the closest word, but it’s nowhere near strong enough: utter humiliation coupled with a frantic, desperate desire to disappear is probably closer. There is something wrong with you. Freak.

My parents treated my gender like it was the most normal thing in the world. The fact that I had short hair and wanted to dress like my dad was as unremarkable as eggs for breakfast, or the need for an umbrella when it rained. Perhaps more importantly, it was equally unremarkable as my twin sister’s undying love for Barbies and tutus.

But nothing they did could protect me from kids at the supermarket who wanted to know “what” I was, or distant acquaintances who couldn’t hide their confusion when we ran into them on the train.

I meet a friend for coffee and tell him I’m writing a piece about locker rooms.

“Interesting,” he says. “What’s the thesis?”

“There’s no thesis,” I tell him. “Except that I’m tired of being the one who chases myself into the corner at the locker room.”

There are people, real people, many of them, who think we are freaks. Who want to shame us, hurt us, chase us out of the locker room with fiery torches. I’m writing this at the beginning of 2016, and to my knowledge, no trans or gender-non-conforming people have been murdered yet this year. But, devastating as it is to name this: that probably won’t be the case anymore by the time this piece is published.

In a world like that, there’s no room for me to pick up a torch against myself.

I have about 20 New Year’s resolutions, and most of them are pretty mundane: finally get that tattoo I’ve been wanting. Work harder at getting eight hours of sleep. Cultivate the ability to laugh at myself.

But as of today, I’m adding one more to the list: I’m going to stop trying to hide my supposedly incongruous body behind a 2.5-foot-long locker door. I’m going to walk, not run, from the shower back to my locker, no matter how funny I think I look wrapped in my tiny gym-issue towel. I’m going to take my time changing, so my binder doesn’t get stuck on my armpit or my face. I’ll let those lotioners next to me wonder what the fuck this oddly shaped undergarment is—that’s their problem, not mine.

And once in a while, I’m going to stroll on over to that big full-length mirror in the middle of the locker room. And in whatever state of dress or undress feels most comfortable, I’m going to do a little flexing, a little primping. I might even buy a bottle of Neutrogena and take the time to moisturize these hairy legs of mine.

Because it’s winter and my skin gets dry.

And because fuck it. 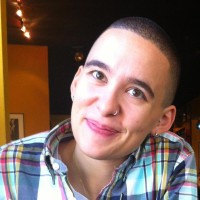 Naomi Gordon-Loebl is a writer and educator from Brooklyn. Her work has appeared in The Nation, Complex, and the anthology The Social Construction of Difference and Inequality.