Postcards from the Middle: Top Surgery While Genderqueer

Pretty much the key thing to know about gender confirmation surgeries in general is that we as humans can do them, which is itself weird and wonderful and kind of unbelievable. Think about it: a body can be anesthetized and wounded and healed in such a way as to feel like a home it wasn’t before. Each piece of the process still seems miraculous to me.

The other main thing I learned from having top surgery this fall is that this particular process is quirky and kind of hilarious. I went to see a man about having my breasts taken away, and all of our conversations took place in a room full of little silicone baggies illustrating possible implant sizes. I was prescribed painkillers and stool softeners and am now, months later, trying to decide how to get rid of a near-full bottle of prescription-strength laxatives. (My roommate: “Do you have any enemies?”) I have discussed my nipples with co-workers. I discovered that breast tissue in cross-section looks like a sunflower, with lobules radiating out from the nipple like petals, and I know this because my girlfriend got a glimpse of the organs in question leaving the operating room, in plastic cylindrical containers like the ones take-out pho comes in.

But as I say, gender confirmation surgeries are indeed possible, and I had one, and I had mine while also being a non-binary human, who identifies as non-binary and genderqueer, doesn’t take T, and uses the pronouns they/them. My non-binary identity stems from a strong and settled sense of gender failure. For all that I spend my time thinking about gender, I’m just not that good at it. People have thought I’m masculine because of my hair or clothes; I’m a sissy who cannot start a campfire or drive stick. People have thought I’m a girl because of, well, compulsory cissexuality; then they saw me try to walk in heels. You know how some people score high on the genderqueer scale because they just have so much gender, of everything? Those people who can apply eyeliner and grow facial hair and check your engine and frost cupcakes with little roses on them? I’m the opposite. I can’t do any of those things.

My gender lives in a nelly little comfort zone around middle of the spectrum.  I mean really, I prefer the “solar system of possibilities” model of gender to the “spectrum of masculinity versus femininity” model, but we can temporarily flatten my solar system down into a line, stretching from Lots of Masculinity Or Something Like It on one end to Vaguely Androgynous in the middle to High Femme And Associates on the other. If you plotted my gender expression as distribution graph, and then put it next to that of a beautiful non-binary gender peacock with signifiers all over the place, you’d get something like this:

The arithmetic mean gender expression of both of these is turquoise, but for different reasons, and with different implications for identity, visibility, and accessories. My genderqueerness feels like a carving out of gendered signifiers, a subtractive model of gender rather than additive. Take away the long hair, and the studied swagger, and the dresses that always felt like drag, and the mirrored aviator sunglasses I tried to wear in high school because I thought they made me look butch, and there I am, still, in the middle. And then take away my breasts too, please.

I spent about ten years binding heavily, thinking about top surgery, and putting away savings, then six weeks early last year researching surgeons and having consults. I found a local surgeon who was a great fit (distinguished by his practice’s specific competence around non-binary folks  the intake coordinator asked me for my pronouns once and then no one in the office ever got them wrong). Then it took me a bunch of months before I scheduled surgery, this thing that had been a long-range goal pretty much my whole adult life. Why?

Well. Gatekeeping partly: I had to find a therapist and get a letter, determine that the surgeon I wanted didn’t accept my insurance and that my insurance probably wouldn’t cover top surgery anyway, and scrape together all my money instead. I also found myself just a teeny bit worried that maybe I was irrevocably stranding myself between two identifiable if incomplete Gender Islands and that no one would ever see me as sharing their gendered experience or relate to me generally or want to make out with me ever again. What if I passed? What if I didn’t? What if people read me as an incomplete or unsuccessful trans man, and how much internalized misogyny underlay the fact that I was even worried about it?

One thing that comes up with nearly every non-binary person I talk to is something like trans imposter syndrome: a sense of being trans, or trans-ish, but maybe not trans enough to count. This slices all kinds of ways along predictable axes of visibility in trans communities: passing privilege, whiteness, access to physical transition, etc. While my entire forebrain had spent years dismantling my internalized cissexism, including the idea that There’s A Right Way To Be Trans, I worried that sneakier, more reptilian parts of my brain were convinced that surgery was the thing that would finally make me trans enough.

There’s this pervasive and troubled cultural belief that identity, especially difference, is legible on the body. Of course sometimes it is, as with visible disabilities or, maybe, racial identity. But much more isn’t, from sexuality and gender identity to invisible disabilities to personality. There’s an interesting flurry of historical pseudosciences on this topic, with some telling societal anxiety about race and genitalia. 19th-century sexologists asserted that female “inverts”  lesbians  were identifiable by their enlarged clitorises (an idea referred to by the delightful term, and my new DJ name, “clitorism”). Phrenology and craniometry went nicely with white supremacy and early eugenicist ideology, which is why white men in the early 19th century were measuring how much bird seed could fit into various human skulls and calling it science.

I knew enough to call bullshit on each and every one of these, but legibility is seductive. Was I looking to etch my transness and difference on to my body, as evidence, for the next time someone told me that my pronoun preference is ungrammatical? (What was I going to do, show them my scars? What would they do, suddenly respect my identity?) Wouldn’t it be more radical (and significantly cheaper) just to say fuck all to all that and go live my gendered truth by myself in the comfort of my brain?

The trick is, dysphoria is something different. It’s easy for me, an obvious Ravenclaw, to fully and completely deconstruct gender on half a glass of wine: Who are we to even say whether any human or non-human entity has ever had a gender of any kind, or whether such a thing is even possible? But we have bodies and we live in them. We live in them independent of what our local and time-bound societal circumstances have to say about femininity, masculinity, beauty, desirability, or clitorises. I run deeply analytical, and have a hard time taking anything on intuition. But what I had was a feeling that predated an analysis or a politic, and a feeling that this body and the way it felt to have it wasn’t me. Some people experience their transness as heavily social like their dysphoria goes away when they’re naked and alone in their rooms. For some folks it’s an intuitive sense of identity, knowing the name and pronouns and words that feel like home. For me, it came back to my body. I live here. I always will. So I called the surgeon, booked a date, and called my parents to say we had to talk.

The single greatest gender hack I discovered when talking about surgery with folks like my parents, co-workers, etc. was to come out swinging about how happy I was about setting a date for surgery. Now, I too have read Sara Ahmed’s The Promise of Happiness and appreciate its critique of the cultural imperative of happiness and its celebration of killjoy feminism, but while we’re identifying normative power structures, just this once, why not put them to work for us? This is why I used a lot of words like “fantastic” and “so excited” and “finally” when talking to people outside of my nurturing queer bubble about surgery. I chose to be pretty aggressively out about it in my workplace, partly because I was fortunate to have rather lovely coworkers who I knew would be receptive and take my happiness as its own argument (normative power indeed). I sent individual emails to each of my coworkers maybe six weeks before my surgery, and then had a number of follow-up conversations in person. Friends, are any of you in the position of composing similar emails with family or coworkers? Would you like to read the email I sent to my co-workers, reproduced verbatim, as a jumping off point? Here it is.

One of my better-repressed dysphoria coping mechanisms that came to light in the days before surgery was my anthropomorphic, antagonistic relationship with my breasts. Kind of like unwelcome roommates, who over years of cohabitation I had learned to grudgingly tolerate, despite their clinginess and poor boundaries. Then I decided to kill them.

I was unsure how to break the news to them. It wasn’t their fault. “Hey guys,” I imagined I’d begin. “So, while we’ve never really been friends, we’ve had some okay times together throughout the years. Remember when we used to have a little routine where one of you would ask the state capitals and the other would answer, as a comedic strategy to deflect from identifying you as a part of my body? That wasn’t so bad.” In the end I settled for just taking a naked selfie in the bathroom the morning of my surgery. Bye, guys.

The other day I was sad for a minute, per the human condition, and to calm myself I took a deep breath. Then I noticed something, and then I did it again. For about ten years, taking a deep breath meant expanding my ribcage against a binder, wincing a little, discreetly digging my fingers under my collar and hitching a shoulder strap back into place. It doesn’t anymore.

About six weeks after surgery I went for my first post-surgery run. I hadn’t run without a serious sports bra and a constantly negotiation of bodily comfort versus self-consciousness since I was about thirteen years old. It felt like a funny postcard from fifteen years ago, like discovering a diary entry in my middle-school cursive. It felt like one less thing to worry about, well, two fewer things. And that’s why I was laughing as I ran down the sidewalk, startling passersby and kicking up leaves as I went. 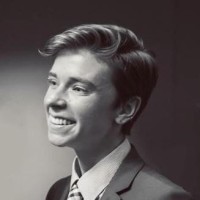 Ary Smith is an arts administrator, audio engineer, and mediator in Berkeley, CA. They enjoy printmaking and public libraries.