My Hebrew-school kindergarten class spent weeks learning to sing the Ma nishtanah–the Four Questions–for the Passover seder. We sounded out the Hebrew lyrics phonetically in piping little voices, memorizing them with un-childlike desperation. Our teachers didn’t bother explaining the meaning of the words, they just prepared us to stand up in front of our families and sing the only solo of the seder night. The foreign chunks of sound gave up no hint of their meaning. I made up associations for each section to help me remember—I knew what a mnemonic was before I knew the word.

It’s a plaintive song: it’s a single small cry for an explanation.

My voice always trembled when I sang it. I stood on a chair at the table in a black velvet dress with lace at the throat. I rushed the repetitions, losing the rhythm, trying to make it to the end of the song before the meaningless sounds started to jumble in my head.

My family sang the answers back to me at the end of each line, swallowing my voice, letting me take a shaky breath.

(These aren’t really answers. They’re descriptions—yes, we’re eating matzah, but why? The explanations come later in the seder, in the form symbolic foods and Talmudic arguing. We eat bitter herbs to represent the bitterness of our slavery in Egypt. We dip into salt water to represent our tears. But who wants to sing that back to a child?)

When I was small, the sound of my family’s singing washed over me. Ten or twenty voices, some tinged with Yiddish lilt, some drawling from Long Island, Queens, New Jersey. Voices tinny and husky, teenager-broken, speak-singing, or smoker-strangled; most of us off-key and happily flat, except for my grandmother, who flew high above in a pale, fluttering trill.

Each year I asked, and each year was answered with not-quite-answers.

At the beginning of the seder, the leader blesses a piece of matzah and lays it aside. This becomes the afikomen—’dessert’—and is eaten later. The seder can’t be finished without it. Which is why someone’s got to steal it, hide it, and ransom it. In my family, the children do the filching and the adults go looking. If they can’t find it, they buy it back with money or gifts to end the seder.

(My current hiding spot involves a plastic bag, some tape, and submersion. More, I can’t say.)

When my Zayde was head of the seder, he only ever pretended to look. He mimed a swipe at the couch cushions. Toed the curtains. Opened the freezer. My cousins and sister and I tailed after him, snickering, shushing each other, trying not to give it away. Soon, he’d give up, and get down to haggling. The invisible mantle of his forefathers—kosher butchers from small-town Poland—descended upon him, and the wiry brows would lower in mock sternness.

“Oy vey ist mir, and I’m made of money? Lilly, these kids, they’ll bankrupt me!”

Back and forth we’d go, with more giggling than haggling, until we each got our little prize.

The license to sneak and steal was my favorite part of the afikomen. I’d like to think that making us laugh was Zayde’s.

Brooklyn, the 1970s, long before I enter the picture.

My sister and her cousins are at a seder in an apartment building. They’ve just stolen the afikomen, and the adults are hunting. Clustered in a bedroom, the kids can’t decide where to hide it. The parents start down the hallway, coming closer. There’s no good hiding spot. Where? The adults are closing in. Where? Where? Hide it, hide it, hide it! Just as the door opens, the littlest cousin panics. She snatches the matzah, bursts into tears, and throws it out the window.

They bless a new matzah and finish up the seder. A pigeon eats afikomen.

In the seder there is a parable about four children: the wise, the wicked, the simple, and the silent. The wise one knows exactly what question to ask: what are all the rules of the seder? The wicked one asks: why do you do this seder thing? The simple one asks: what’s going on? And the silent one does not even know how to ask.

Each child receives a different answer, even the quiet one.

But life doesn’t usually reward the silent, the still.

I would like to tell you stories about what seders were like for my grandparents in the Old Country. To describe who was around the table in the town of Sokolow, where my Zayde was a handsome young soccer star and his family owned two butcher shops: a kosher one for the Jews, a non-kosher one for the gentiles.

I would like to know if my Bubby’s family had Passover when her family was relocated to Siberia to wait out World War II. What their afikomen was made of, and what they ransomed it for. I would like to tell you if her youngest brother sang the Four Questions, or if he would have sung as beautifully as she did at our table in New York.

Whether my grandfather could have whispered the prayers to himself while he was fighting with the Polish partisans—the ones who made him drink pig’s blood to prove he wasn’t a Jew. Whether my grandparents had their first seder together when they met and married in the displaced persons camp in Germany, or once they had arrived in New York. If, when they retold the story of the Jews fleeing death and slavery in Egypt, they felt closer to them than they ever had.

But I can’t tell you these things. I don’t know them. After years of asking the same four questions of my family, I didn’t know how to ask any others. Simcha wasn’t a solider; he was my Zayde, who pretended to bargain for the afikomen, and snored along to the Mets, and broke out in Cossack dancing when he drank vodka. Lili wasn’t a girl from a town that no longer exists on any map; she was sponge cake and gefilte fish and cholent, the clicking and conversation of Mahjongg with the girls, watching game shows and solving the puzzle. What more could I ask of them?

I spent years feeling like the wicked child. But I’ve spent more the one who did not know how to ask. And now it is too late.

And no one knows if my granduncle would have sung at our table. He was hit by an American truck in the displaced persons camp, at just the age when I was learning to sing my own Four Questions.

I sang the Ma nishtanah at age five and six and seven–heart dangling out my mouth, hands in fists under the table.

I sang it at age ten, eleven, twelve—no longer so nervous, the words long having burnt into my brain.

I sang it at fourteen, fifteen, sixteen—sullen, mutinous, eye-rolling—daring myself to just not show up next year.

I turned thirty this year, and I still sing it at every seder. Still the youngest in the family after all this time, and terribly overqualified for the job. I’ve gotten my answers time and time again, I know them by heart. But I don’t mind it anymore. I’m happy to keep asking.

The voices that answer my song no longer wash over me. They don’t swallow my voice and carry it tumbling down a river of sound. When we all manage to make it to the same table, there are missing parts to our off-key harmony.

So, my cousins and sister and I sing louder each year. When the songs flag and the chorus dies out, we smack the table and get it going again. When there are verses to shout, we pound them out, and by god, do we ever Dayenu! That one song that goes forever, and repeats a million times, the one that nobody wants to do? Keep the wine glasses full—we’ll sing every line.

We figure, by the time I finally hand over my Four Questions crown—whenever that fuzzy, far-off day arrives—we’ll be ready. We’ll carry that little trembling voice in a roaring tide, and we’ll bring it safely in to our harbor. We’ll give it all the answers it needs. 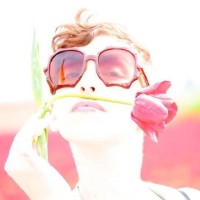 Sarra Scherb is a gallerist, curator and arts writer in Seattle. If you walk into her gallery she promises not to ask you how you feel about Jeff Koons, or pierce you with the stiletto that she is not wearing.