At seven on Easter morning, my dad rolls out of bed and pulls on a warm-up suit, sneaking out of his room and down to the kitchen. He shoves a piece of bread into the toaster and flips through yesterday’s newspaper while he waits for it to pop. Then, breakfast in hand, he walks onto the front porch and surveys the lawn, steeling himself for the task ahead.

Next to Christmas, Easter is the most revered holiday in the Hamilton household. Despite our Episcopalian upbringing, we’ve abandoned most of the Christian traditions. It’s been years since I’ve attended church or sung “Christ Our Lord Has Risen Today.” I don’t own a single fancy church hat or fascinator in robin’s-egg blue or crocus yellow. I’ve never broken Lent with Peeps, hollow chocolate bunnies, or Cadbury Cream Eggs.

Our holiday revolves around the hunt.

Over the course of two decades, my dad has turned hiding Easter eggs into an art form. He nests them within boxwoods and gutter spouts, lodges them behind shutters or in the mouth of a hose. He conceals them under flowerpots and in the knots of trees. Where gravity opposes his plans, he uses tape to secure eggs to branches or fence posts. Sometimes, he runs one up our flagpole. While classic chocolate eggs are his candy of choice, he’s experimented with other mediums: miniature Snickers and Milky Way bars in glossy wrappers and small, saw-toothed Reese’s Peanut Butter Cups.

When I come downstairs, Dad is standing in the front hallway with a tennis racket in hand, practicing his service motion. He’s already taken a few laps around the garden to make sure that squirrels or other foragers haven’t disturbed his handiwork. A glaze of early morning sunlight coats the lawn and fat bumblebees explore newly opened flowers. Here and there, gold foil flashes from within the cup of a yellow tulip; metallic purple and green shimmer in patches of lavender or low-lying grasses.

“The Easter Bunny has been here!” he says when he sees me. “I think he’s been especially clever this year.”

I pad into the kitchen and plunk down beside William, my thirty-two-year-old brother, who is slouched over the speckled granite island nursing his third cup of coffee. Assorted ceramic chickens peer at us from cupboard perches. Though both of us live within thirty minutes of home, William and I have taken up weekend residence in our childhood bedrooms. Erik, my twin, decided to spend Easter in South Carolina with his girlfriend’s family, a treason that we’re choosing to ignore.

Erik has never won the hunt. He is the Ferdinand the Bull of our family, loping through the garden, daydreaming about banjos and petite hipster women. All the same, he’s indispensible to me, like the long-shot electoral candidate who draws votes away from your opponent. Sometimes, our dad hides pity eggs in the tops of trees where only Erik, the tallest of the three children by half a foot, can reach. Erik’s absence this year hints at a disturbing reality — that after twenty-plus years, we may be approaching the twilight of our traditions. We’ve been living in the rose-tinted reality of premarital days. How long before significant others pry us away? How long can we continue to eat so much chocolate without concern for our waistlines or blood sugar?

Before the competition can begin, Dad goes over the ground rules. The driveway and backyard are out of bounds; no trampling flowerbeds; no mauling siblings; it’s all fun and games until someone loses an eye. Our arena is a wide rectangle enclosed on three sides by a fence that mom erected to keep deer from eating her perennials. On the right, an ancient oak hovers protectively over the yard, casting spring shadows on the grass below. On the left, a red brick turret juts into the sky, the product of our neighbor’s medieval remodel.

This year, Dad has added a new layer to our competition. “A grand prize!” he announces with a wink. For the moment, he stays mum.

The real prize, of course, is a year’s worth of bragging rights. For Dad, it’s all about outwitting his children. Though the actual hiding of the eggs takes a few hours, the scheming starts much earlier. Several years ago, for my mother’s sixtieth birthday, dad composed a book of haiku poetry inspired by evening strolls through our garden. These daily walks serve a dual purpose: not only can he flex his poetic muscles; he can evaluate hiding places for the following year’s hunt.

When our mom says go, William and I scramble through the front door, shoving one another aside, trying to reach the most obvious hiding spots first: the narrow slots behind black shutters, the underside of a rocking chair. At some point, our family’s Easter egg hunt must have had the same air of garden-party civility that characterizes the annual White House event. In the hazy past, we were cherubic children in seersucker or pastel, toddling on chubby legs, clutching woven baskets full of glossy plastic grass, peaceably coexisting. Now, our tradition resembles The Hunger Games.

This morning, Dad placed several ratty hats around the yard, perched on top of boxwoods or resting casually on the grass. Under a scuffed Nationals cap, I find an envelope with a slip of red paper folded inside. “Beware the feint! You think there’s something here but there ain’t!” he has scribbled in his barely legible lawyer’s handwriting. Behind me, I can hear him chuckling. His shoulders waggle up and down, and he removes his visor to wipe tears from his eyes. “Read it out loud!” he yells, wanting everyone to benefit from the witticism. Mom, the event historian, turns toward me with her iPad and starts recording.

After the recitation, I turn my attention to the fence-line. When I come within a few feet of an egg, Dad begins to shout, “Hot, hot, hot!” like a quarterback before the snap. I take a few steps to the left, peering into a tangle of gold forsythia and searching for the telltale glint of a wrapper. “Cold, cold!” he intones in a quivering voice, drawing out the vowel sound like Jacob Marley.

Our neighbors return home from church just as I am wading through the shrubbery that separates our houses. The father, a bishop in the Church of Latter-Day Saints, waves at me as his blond progeny spill out of the family car. I smile weakly, trying to conceal my ex-boyfriend’s scrubs and a natty, oversized t-shirt. I often wonder what they think of our yearly tradition. This afternoon, will Mr. Guzman draw his youngest daughter onto his knee and explain why the adult Hamilton children participate in heathen rituals?

Within an hour, William and I are both losing momentum. We seem to have plateaued. “Are you ready for another clue?” Dad asks, waggling his eyebrows. Of course, our preparedness is irrelevant.

As though called upon to make a speech, Dad assumes a wide stance and brings his hands together thoughtfully. “Your day will be brighter if you think arborvitae.”

From across the lawn, my mother, a woman with an encyclopedic knowledge of plants, cracks up. Naturally, neither William nor I have any idea what an arborvitae looks like. When Dad’s back is turned, Mom points to a tall, tapering shrub by the front porch.

I like to joke that our Easter festivities are part of Dad’s strategy, an elaborate scheme to shame us into settling down and giving him grandkids. Continue the bloodline or suffer the sugary consequences well into middle age. But then, who am I kidding? This is, after all, the same man who still makes us wait at the top of the staircase on Christmas morning, who lovingly fills our stockings with dental floss and roll-on sunblock, who sequesters three couches — one per aging child — for gifts from Santa. In truth, we’re all complicit in this sliver of extended adolescence, clinging to the holiday dynamics that have defined us for three decades. Someday soon the shape of our family will change and, with it, the nature of our traditions.

When Dad is satisfied that we’ve recovered all the eggs, we head inside to tally the spoils. For the second year running, I’ve won.

“What’s the grand prize, Dad?” I ask, having forgotten about it until now.

He clasps me on the shoulder. “An outing with your father!” he says.

Victory has never been sweeter. 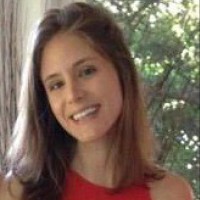 Kathryn Hamilton is a writer and communications professional working in Washington, DC. She is a graduate of the Johns Hopkins Writing Program.