How To Tell If You Are In An E.M. Forster Novel

To your deep shame and embarrassment, you — in your youth — played the viola.

You are slightly less posh than the family you married into. They have sent you to Italy so you don’t teach your common ways to your daughter.

You are a lady novelist who travels by yourself.

It is a plausible idea for you, in industrialized, Edwardian England, to sneak off to live in a new forest with your lover and not expect to be found.

You once did a terrible thing. Someone knows, but will not reveal it.

It is easier for you to be attracted to people when their class is indistinguishable because they are wearing cricket whites.

You are abroad. The landscape speaks to you in a way that none of the people do.

You realize that you have mistakenly agreed to marry a man who reminds you of a windowless drawing room.

Conveniently, your ex-lover looks enough like his sister that you can transfer your flirtations to her.

It isn’t possible to love and to part, though you wish that it was. You can transmute love, ignore it, muddle it, but you can never pull it out of you.

Like many others who have lived long in a great capital, you have strong feelings about the various railway termini.

You would like to be friends with someone but are aware that 500 years of colonial oppression means it is not possible yet, the land and sky will not allow it.

You have lost your guidebook to Florence, and thus do not know how to look at art.

It is easy for you to sympathize at a distance.

You stand at the extreme verge of gentility. You are not in the abyss, but you can see it, and at times people whom you know had dropped in, and counted no more.

A grove of trees reminds you of the woman you love.

Your only quirk is your pierced ears, which you allowed yourself to get after you got engaged.

A man confuses your expression in the middle of an argument for that of an expression of love. Later, you marry him.

You once did a kind thing. Someone knows, but will never reveal it.

You love the idea of Italy, but perhaps not Italians, or even Italy itself.

You first learn about sex from a teacher who draws diagrams in the sand on a beach walk. He invites you to come to dinner in ten years with your future wife. Ten years later, you and your boyfriend run into him, and neither of you appreciate the irony.

The woman you are engaged to lives in a house with furniture purchased from Tottenham Court Road. Aside from that flaw, she will do.

You like being told that your notions of life were sheltered or academic; that Equality was nonsense; Votes for Women nonsense; Socialism nonsense; Art and Literature, except when conducive to strengthening the character, nonsense.

You have read the Symposium over your school vacation.

You give up writing short stories to work at a second-rate public school.

Someone puts your most embarrassing secret into their novel as a fictional event. You are angry, but can never tell why.

There is a password to life and you cannot learn it, and the editor of literary journal who has just rejected your short story cannot teach it to you.

You discover you have a half-brother. You resent him for being stronger and healthier, and are disgusted when he sings a dirty song with a soldier.

You think you have had a revelation. In reality, you have gotten yourself in a muddle, and later it makes you miserable.

If you ever take to living as you play piano, it will be very exciting indeed. 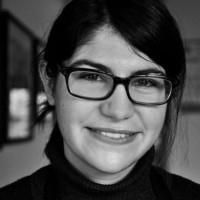 Sarah Gulick is working on a novel and lives somewhere on the East Coast.