His father died
suddenly, leaving a sick wife
and four young girls.
He decided to go to America, stake
a claim on Golden Mountain,
and come back for me.

He wrote to me
of Angel Island, where officers
scrutinized his papers
and doctors
made him stand naked
as they inspected
his eyes. He built a business
selling groceries,
sent money home, and came back
to marry me.

I threw up on
the sea. He calmed me,
made love to me.
The first time I cried
silently. I had not been
with another man, but I knew
he had a woman.
What could I do? There was
no land in sight.

San Francisco.
The green hills
of late spring on the verge
of a golden splendor. The city
rose from the sea
veiled in a hazy blue.
They let him land
from the ship but I had to board
a ferry. They didn’t even
let us say goodbye.

There’s nothing
we can do. Foreign wife
of a Chinese merchant, your case
is automatically
denied.

At night I watch
the sea. I want its embrace,
cold, dangerous, overwhelming –
in these waves
I will finally be home.

A year has passed and I have failed
to get you to shore. The fault is mine.
I know what it’s like in that prison,
an island neither land nor water, not
knowing if or when you can land.
I’ve been there. Twenty years ago
I sailed the Pacific, dreaming of
mountains and rivers running gold.
I landed in that prison instead, trying
to prove my name, my family, my
humanity. But my father had died,
my mother needed money. I left a girl
behind. I built a grocery business,
made enough to bring her to me,
but the law changed when we were
at sea. Foreign wife of a merchant,
she could not be landed. She went
home, never the same again. For years
I thought I could not love again.
Then my friend, your uncle, told me
about you, his sister’s girl. Your father
left, your mother needed money. I
thought I could save you, give you
everything I never had. How wrong
I am. You are still young. I’m the ruin
of the man I had once been. Maybe
I have said too much.

The women recite with her,
their voices rising and falling,
tongues tangled in words
they have yet to understand.
Thou shalt not misuse the name
of the Lord your God.
She watches the girl in the corner,
silent, her eyes
drifting toward the sea.
She wants to tell her
of the land of the free,
a kingdom of believers,
where sinners become saviors.
But she knows no words
can salve a child lost to fever,
no words can allay
an eternal prison.

Behind the walls of his mansion
he holds his boy close.

Nine years ago he placed
the child on a silver platter,

displayed to a hundred guests
and his convalescing wife.

Outside, men smash windows,
spill rice onto the streets,

their fists now raised
toward the steamship docks.

I hear him tell the boy
he should count his blessings:

unlike those dregs of Asia,
he was born to a worthy people,

and unlike those hoodlums,
he must always strive.

He points beyond the sea.
One day all this will be yours.

to build the railroad
that built this home atop the hill.

And he does not yet know
the boy would not become a man,

felled by a fever
in another, ancient land.

Between 1910 and 1940, Chinese immigrants to America were detained at the Angel Island Immigration Station in the San Francisco Bay. As they waited for weeks and often months to find out if they could land, some wrote poems on the walls. In her new poetry collection, Islanders, Teow Lim Goh imagines the lost voices and stories of those detained women.

Nicole Chung: Why did you want to write a collection of poems about the Angel Island Immigration Station?

Teow Lim Goh: Sometimes I think I didn’t choose the subject, but that it chose me instead.

Like many writers, I have my obsessions. Mine include place, migration, history, landscape, and erasure. How do we inhabit a place? What does it mean to cross borders? What does history tell us about who we are and who we can be? Whose stories do we believe and remember? All these issues collided for me when I went to Angel Island and began researching its history. In writing these poems, I could work through these questions.

How long have you been working on this collection, and what sort of research did you conduct before you began writing poems about Angel Island and the people who were detained there?

I have two answers: a year and a half and four years.

I first visited Angel Island in the summer of 2010. I was just starting out as a writer and looking for subjects for my work. At Angel Island, I saw a prison in a splendid landscape. I knew then I was going to write about the place, but I didn’t know yet what shape my work would take. I thought I was writing a collection of essays on place and migration, with Angel Island as the main stop on a larger journey. I published a couple of essays about Angel Island. But as I delved into the story, I felt the essay form wasn’t enough for what I wanted to say. I didn’t want to write just about the history. For one, it has already been done. I wanted to go beyond the facts and into the emotional truth of this history.

Two or three years after that first visit, I learned that the women detained on Angel Island had also written poems on their walls. Their words were lost in the fire that destroyed their barracks and closed the immigration station. It came to me slowly, but once I had the idea to imagine what the women might have said, I realized I had a book. I wrote the book in a year and a half and began submitting it in the summer of 2014.

I did a lot of research that I thought would go toward a book of essays. By the time I began writing the poems, I knew most of the history, and the ideas came quickly. I depended on two books in particular — an anthology of the surviving poems, their translations, and oral histories of the detainees, and a comprehensive scholarly account of the immigration station.

I went to Angel Island twice. I’ve visited San Francisco nearly once a year in the last decade, so I’m familiar with the city. When I travel, I try to tap into my sense of the place, be it the way the surf crashes on the headlands, the gold of the late summer grass, or the fog burning off the blue-green bay waters. These corporeal experiences are another kind of research. I was, and still am, obsessed with the sea as a metaphor. That surprised me, given that I have yet to live by the sea.

What do you think Angel Island and the immigrant stories you tell in your poems have to teach us about our current immigration system and the surrounding debate?

Early in the writing of the book, I wrote in my notes, “What are the intimate consequences of political decisions?” Politics is ultimately about power. I find that when we talk about politics, we often talk about values and beliefs, as if what matters are our principles and the positions we take, instead of the repercussions our laws and institutions have on the people we don’t see.

I wrote many of these poems from the labyrinth of laws that reinforced Chinese exclusion. In “The Waves,” I was thinking about what would happen to a newlywed woman who was already at sea when Congress enacted the 1924 Immigration Act, which denied admission to all “aliens ineligible for citizenship,” including the foreign-born wives of Chinese merchants. I don’t think supporters of the law considered any of these implications when they pushed for its passage. I don’t think it even crossed their minds.

The particulars are different now, but I see the same dynamics at play in our current immigration system and the surrounding debates. The arguments are often simplistic and the logic seductive. They broke the law and should be deported. We are safe and they are dangerous. Whether we talk about the DREAM Act, Donald Trump’s call for Muslim exclusion, or Arizona’s SB 1070, we prioritize our comfort and fragility over the consequences these actions have on other people’s lives.

Our politics shape the ways we live and love. I hope these stories get us talking more about that. 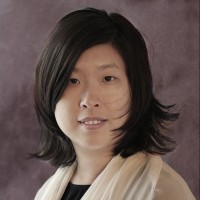 Teow Lim Goh's debut book of poetry, Islanders -- on the history of the Angel Island Immigration Station -- is forthcoming from Conundrum Press in April 2016. She lives in Denver.