An Interview with Jillian Keenan, Author of Sex with Shakespeare

Jillian Keenan’s voice is loud and clear as she discusses her spanking fetish in the crowded coffee shop where we met to discuss her new book. She doesn’t care if anyone hears her discuss what are some fairly intimate details of her life, nor should she have to. But given that many people lower their voices, literally and figuratively, when discussing topics like these, it’s rather refreshing that she doesn’t. Jillian originally revealed her spanking fetish in a big way: not just to herself and her partner, but to readers of The New York Times. Her piece “Finding the Courage to Reveal a Fetish” ran in the newspaper’s Modern Love column in 2012. She continues the tale in her new book, Sex with Shakespeare: Here’s Much to Do with Pain, but More with Love, using Shakespeare’s plays as a vehicle to tell the story of how she came to understand her own sexuality. Jillian and I discussed kink, the almighty Bard, and the beauty of self-disclosure — and, happily, she never lowered her voice.

The book tells the story of your relationships with kink, with others, and with yourself through several of Shakespeare’s works. How and when did you decide that this was the way you wanted to structure the book?

I think that it is an accurate reflection of the way I’ve lived my life. Shakespeare has always intermingled with every part of my life and continues to do so. I’ve been thinking a lot about Portia from The Merchant of Venice lately, because she is a woman who is confronted with this climactic professional scene in which she has to appear in court, and I think I’m also at a bit of a professional climax at this point in my life, so I look to her for inspiration. For as long as I can remember, Shakespeare has intertwined with every other part of my life, including my sexuality.

Was there a specific point when you realized spanking and Shakespeare were entwined in your life?

They’ve always been entwined in my life, but as I wrote the book I was surprised by how intertwined they were. When I wrote the proposal I knew that I would be able to weave Shakespeare and spanking together, but I thought there would moments where it would be tricky. I thought there would be a certain play where I’d have to kind of stretch to draw those connections, or a time in my life where I’d kind of have to massage the text to make it work, but I was shocked by how effortless it was. Not the process of writing the book; that was agonizing — but it was effortless to draw parallels between the two. I think Shakespeare is a lot like the Bible in that everyone sees what they want to see, or everyone can see what they want to see. I think it’s so rich with detail and so insightful into the whole spectrum of human experience that I can write a book weaving Shakespeare together with my sexuality; someone else can write a book weaving Shakespeare with that muffin [points], that specific muffin. There’s so much in Shakespeare that I think anything is possible.

In the book, your “conversations” with several of Shakespeare’s characters reveal to you facets of your own inner life. How did you decide you wanted to include dialogue like this?

I think we’ve all had moments where imagination overtakes us and we allow literal reality to be subservient to our inner lives. The literary characters we love are like friends, and we can interact with them like friends: we can fight with them, we can argue with them, we can learn from them, we can take comfort from them. I certainly have. And so by bringing some magical realism into my book, I simply sought to be truthful about the ways that I interact with these characters — because I do consider them friends.

What led to you write the Modern Love piece?

I was just another millennial in New York City who was overeducated and underqualified and I wasn’t even getting interviews for jobs, so someone who I turn to for advice said to me, “You’re young, just take a risk.” And that afternoon I started writing the essay that would become the Modern Love piece. I think after so many years of shame, eventually it had to boil over.

In the book you discuss the first time you “came out” as kinky to the ones you love. Do you find the book functions as a second “coming out” of sorts?

This [book] of course dives into much more detail than The New York Times piece, so yes, in a way I think this book is the first time I’ve tried to really make it clear what it is to have a fetish as opposed to a preference or an interest. I think this is the first time I’ve had the word count to dive into the detail of what it means to have one aspect of your human sexuality be so all-encompassing. I understand there are kink people and even people who we would call vanilla who enjoy a little bit of erotic spanking mixed into a much broader spectrum of sexuality they enjoy. But there’s a difference between enjoying a little bit mixed in, and having a sexual identity that’s fully centered on that and revolves around it and always has and always will . . . this book hopefully illustrates that.

Were you ever worried about being pigeonholed as a kink writer or “that spanking girl”?

Yes, absolutely, and it’s something that I’m still worried about. So far, I’ve been able to balance the spanking writing with the foreign correspondence I do. Hopefully that will continue to be the case, but I’m also nervous about outing the fact that I have multiple sclerosis. I have never mentioned that in an article before, but now that I’ve put it in my book, the cat’s out of the bag. And yeah, part of me is afraid that editors will not want to send me to interview street fighters if they know that I have MS. But at a certain point you have to run towards the fire; if I’m going to burn, at least I’ll know that I lit the match myself.

There are a lot of emotionally trying moments you face in the book. When you found yourself confronting an especially challenging portion of the book in the writing process, how did you will yourself to push forward?

Ah, wine! You know that expression “write drunk, edit sober”? I jest a little bit, but definitely there are trying moments. I am one person and I have a little window of life in which to say something that I think is important. And then the window will close and it will be someone else’s terms. While I have this opportunity to speak and be heard even by a small minority of people, I think it’s more important than any discomfort I might feel while writing a difficult chapter.

I think that self-disclosure is an art form that is oft-maligned, for better or worse. But in my life, the process of writing this book was incredibly valuable, and I hope that the process of reading it will prove valuable to at least some people. We’re filling in the constellation of human experience with everything that we write, whether it’s personal or fiction — we’re trying to paint a picture that is comprehensive and detailed and reflects the beauty and diversity of humanity, and I think this subject is a point that has not as yet been flushed out. So I’ve added my own speck to this enormous constellation.

Another of the ideas you discuss in the book was that you didn’t have a positive representation of your sexuality growing up. Have you found that as you’ve grown older there are more outlets that accurately depict your sexuality?

No, I think there are no outlets that are even trying. As far as I know, there are only two people right now that are writing about this fetish under our real names. [In 1996], Daphne Merkin wrote a really influential piece about the subject, and since then has not written anything more. Not only do I think that outlets are not accurately reflecting this fetish, I think they’re not trying — not because they don’t want to, but because people are so closeted about this. Salon ran a piece by a spanking fetishist who used a pseudonym. Right now no one else is writing about this under their real names. I will say this: I wrote the book I wish I could have read when I was fifteen. 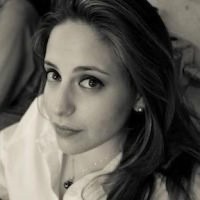 Elyssa Goodman is a writer and photographer based in New York. Her work has appeared in Marie Claire, VICE, New York Magazine's The Cut, Glamour, Men's Journal, and many others.