Shipwrecks in Deserts: On Mystic Atheism

Towards the end of the thirteenth century, an Italian mystic began dictating a series of peculiar visions to a man known to history only as ‘Brother A.’ She spoke in a dialect of Umbria and could not write, and the brother was expected to translate her words into Latin. Angela of Foligno—known herself as the Mistress of Theologians—would tell this nameless brother of her visions of a similarly unnameable thing—or not-a-thing—for a few years, and the brother, lost in the labyrinths of confusion over what she was trying to convey, ended up condensing her dictations into shorter sections.

Perhaps he was confused, in part, because Angela seemed so often to be saying contradictory things: she was before something, but she was before nothing. She was somewhere, but that somewhere was a void, an ‘abyss,’ filled with a ‘thing without a name.’ Her positive affirmations were filled with negatives. It was almost as if—as Julia Kristeva would describe it, many centuries later—she was somehow at once a mystic and an atheist, a woman envisioning a vast nothingness around her. The closer she claimed to get to a god, the closer, too, she came to void. A cathedral made of less-than-ghost.

I am not a believer. But mysticism intrigues me, especially these kinds of visions of void. They reveal—if accidentally, or coincidentally—what is not there, and, by doing so, what is: which is to say, probably nothing.

Sometimes, I think it is easier for me not to believe because of my past. I have transitioned from the lie of living as a male to living as a woman, just as I have travelled from the shame of being an outwardly homophobic Catholic living as a male to a Wiccan to a deist to a blend of Wiccan and agnostic to an agnostic atheist. I acted anti-queer to fit in back in my often casually anti-LGBTQ home in Dominica, as well as masculine to try to throw people off the trail of my femininity; I prayed for a long time after I had convinced myself that I was too small for my prayers to even reach across the vastness of a universe, and, if they were to, to matter.

I was a contradiction, a shipwreck in the waves of a desert.

Once, during my time as a Wiccan of a coven-of-one, when the moon was full and the breadfruit trees were lit with blue like ghosts, I attempted to raise an undine with a spell I had read in the grimoire of a random person’s blog post, even as I did not believe spells would work at the time. No undine appeared; there was nothing but the disappointment—and, yet, comfort—of the blue night. I kept up the act, though I was faintly relieved nothing had been summoned.

Often, I prayed and lied about who I was to give myself a sense of safety. Do this, and you might not burn up forever. I did this even when I was praying to a goddess of my own creation, a Dianic-Wiccan version of a deist god that universes encircled like a sun, too big to care about me, yet something, and oddly comforting by just being there, at least in my mind. When I closed my eyes, I could see it; when I opened them, dark.

After he went blind in his forties, John Milton—who would dictate Paradise Lost without his eyesight—had a vision in a dream that blended presence and absence. He saw his wife, he wrote in Sonnet 23, in a vision of Heaven. She reached towards him, and then, suddenly, the darkness returned as he awoke. ‘I wak’d, she fled, and day brought back my night,’ the last line reads, and I understand that, in my differently contoured way, how opening your eyes can bring back the night more than closing them.

When I was in second form, our religion teacher read to us a letter he said he had received from the Devil. His delivery was slow and terrifying, and the dry-season heat of the classroom seemed to vanish, filled, instead, with an infernal chill. He read the letter each year, as we later found out, but he presented it in earnest each time, his tall body leaning against the desk with the casualness of relating a funny thing that happened to him on the way to work. After reading the letter, a boy named Cameron asked for advice because he had been hearing a spirit calling out his name in the night. The teacher told him to pray.

At another time, the teacher described a satanic encounter with a werewolf, a loup-garou. All I remember of that story was that he described a person’s hand that was a human’s at one moment, and then a furry claw flashing through the dark the next. Many of us in class both believed him and did not all at once. We could laugh at the stories in one moment and be terrified of the dark the next, expecting claws and chanted names. Reality, for most of us growing up in Dominica, was a blend of the mundane and the marvelous, all seamlessly connected. My cousins had told me stories about soucouyants growing up, women who shed their skin at night and turned into balls of flame, like fireflies, flying through the night and seeking the blood of children. And the old Catholic fear of demons opening doors at night and appearing in mirrors and hell-flames opening beneath my feet for the queerness I knew was inside me—old fears, but aided by the exorcism films we would watch in secret—haunted me for a long time even after I had let go of Christianity.

In truth, I was never able to fully shake the fears. It was like a small part of me had been scarred.

I remember walking through the patch of forest—bush, we called it—that separated my home from my cousins’ house, which I walked through for years to go by them. Once, when I was still a teenager, I left later than usual, as the evening had begun to bloom, and I felt a chill walking through the mango trees and hanging heliconias and razor grass. The fireflies had already come out, blinking green and yellow in the shadows. I remember one moment specifically. Fireflies surrounded me, briefly, like a chartreuse cloud. I stood still. I waited. I did not believe in the supernatural, I told myself and others, and yet in this moment alone in the dark, that old fear—a fear that, against rationality, something like a soucouyant might suddenly appear, embodied in those seemingly harmless insects—erupted in my mind. I ran.

There are atheists in foxholes, of course. I often think I have been scarred by the same line of thinking that told me I might burn in eternal hellfire, and that when I am alone—which I often am—my fears loom largest, growing as my own sense of vulnerability does.

I no longer believe I believe, but sometimes the shadows of the past tug at me and feel too much like hands. The old Catholic fears are buried deep, like little half-open sarcophagi beneath the layers of what I believe that I believe. I do not want them there, but somehow, irrationally, they are.

For the art critic E. H. Gombrich in A Little History of the World, human history is like a river being blown by a strong wind, with ‘millions of shimmering white bubbles rising and then vanishing with each wave,’ there only for the briefest of moments. ‘We are like that,’ he says. ‘Each one of us no more than a tiny glimmering thing, a sparkling droplet on the waves of time which flow past beneath us into an unknown, misty future.’ I feel, so often, that I have lost too many years by not having come out as transgender earlier in my life, yet the past also feels brief and momentary, the present ever-present. Everything becomes a moment.

The world feels like it has gotten at once bigger and smaller, with all these transitions.

I cannot imagine living in a universe so vast, in which a theistic deity concerns itself with the doings of one species on a sad blue dot in a solar system. For the eponymous six-year-old sage of Calvin and Hobbes, humans ‘are subatomic particles in a grain of sand on an infinite beach,’ and I think he does us too generous a service, honestly. I feel part of something big, by understanding how tiny I am, and yet I feel part of nothing, all the same.

A mystic vision, in its own mundane way, of a lack of mysticism.

And that’s just fine for me. Now, at least to me, mind and body can better align, as I better understand how I align to the universe. A shipwreck in a desert can be as beautiful as it can be terrifying. 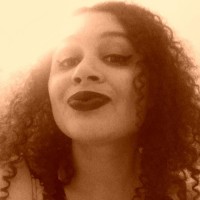 Gabrielle Bellot is a writer from Dominica. Her work has appeared or is forthcoming in The New York Times, Slate, Tin House, Guernica, VIDA, The Huffington Post, The Normal School, Lambda Literary, Autostraddle, and elsewhere. She is writing a novel.