How to Wake the Dead: A Commencement Address

Jacqui delivered this speech at UC Berkeley on Tuesday, May 17th, the day she accepted her PhD, and is nicely sharing it here with us.

One of the most important things I’ve realized in my nine-point-six years at Berkeley is this: Learning to think historically changes us. It changes our orientation to the world. And as students of history, this is how we hone the skills we need to do this work. Our celebration today is explicitly and chiefly about what thinking historically has allowed us to do here, what we have each accomplished.

What interests me most, though, is what has happened to us here, what we have lived through, and what that has meant.

Lately, I’ve thought a lot about how our training might affect how we understand our own lives—which every day become the newly minted past. People are motivated to study history for lots of reasons, not all of them intimately personal, and I certainly won’t tell you what a life coach told me, which is that my dissertation was about police in the 19th century city because “issues of safety and danger were at the center of my life.” Turns out, there are so many ways you can occupy yourself trying to figure out why you’re not writing your dissertation. None of them include actually writing your dissertation. Some of them are very expensive.

But whatever your interests, the work is also personal. What we’ve done here, what has happened to us here: they are connected. One of the things that happened to me here is that my mother died unexpectedly during my second semester in the graduate program. And so a lot of the time I’ve spent here learning to be a historian has also been spent learning to grieve. They have everything to do with one another.

I’m not speaking metaphorically. In these years at Berkeley, I’ve come to see that the work of learning history—to, as one might say, do history—has profoundly shaped how I’ve learned to understand my own past and my mother’s.

Before I say anything more, know this: It’s okay that my mother isn’t here today. It’s been a long time and I’ve got other stories now and, to be quite honest, were she here, she would have already insulted three complete strangers and a Vice Chancellor and had at least one scuffle with UCPD about Smoker’s Rights. She was a special lady.

After my mother died and I cleaned out the house where I’d grown up, I found a pile of documents and papers and . . . stuff I’d never seen before. As a child I was an inveterate snoop, so these things had been quite well hidden. I brought them back to Berkeley with me. It was nice to go through them. My birth certificate, a hospital certificate with my younger brother’s inky footprints on it, a small wooden box with a golden curl snipped from my older brother’s hair. The transcripts from the few semesters she was able to attend college. Some (but not all) of her marriage licenses. And her birth certificate, too, which said that she was born in 1945. It was the year after D-Day, she always said. She was born that April near Omaha, Nebraska, where her father was building B-29 airplanes for the United States Air Force. She was six weeks old when the Enola Gay rolled off the production line.

There were other copies of her birth certificate, too, mostly identical. But they said that she was born in 1943.

This was nothing I’d ever heard before, but it could have been true. My mother lied about lots of things, all the time, and especially about her past.

Finding them felt seismic. I was well aware that there was so much that I didn’t know about her, but to be confronted with the possibility that I hadn’t known this most basic thing was terrifying and enormously sad. I felt bad, sitting alone in my apartment, wondering which birth date had been forged and why, so I did what anyone might do: I called my best friend from the history department.

In retrospect, I see I missed an opportunity to yell into the phone “COME QUICKLY! I have a HISTORIOGRAPHIC EMERGENCY.” Such moments rarely arise twice in a life. But the truth is that it was one, kind of, and I didn’t have to say so—Knightcarl came right over. Our only marketable skill at the time was closely reading archival documents, so we inspected them together.

We finally noticed that it was the 1943 birth certificate that had been forged. That I had, in fact, known when my mother was born.

And then I saw the date on her first marriage license and suddenly I knew what had happened. She had gotten married in 1961, when she was sixteen years old, because she was four months pregnant with her first child. You had to be eighteen to get married, or, you had to get your parents’ permission. By then she had all-ready been kicked out of the house. So: forgery.

There was so much I didn’t understand about her, but I started to figure some of it out that day— not from what she’d told me, but from the traces she’d left behind. Evidence. An archive.

I had never thought of her before as a historical subject, but she was. I’d never thought about what it would have meant to get pregnant at fifteen in blue-collar Baltimore in 1961. I hadn’t realized that her high school diploma was a GED. Or considered why the smartest person I knew had done everything from delivering newspapers and working on the line at General Motors to managing an apple orchard. I hadn’t known to ask how the birth of her first daughter, in that time and place, might have constrained every choice she made  for the rest of her life. I hadn’t considered the possibility that even when I was born nearly 22 years later, she was still also a scared, angry teenager. That on some level, that girl was who had raised me.

I came to consider all of these things in the months and years that followed. Reading and sitting through seminars and lectures, I’d quietly cull the things that helped me understand her so I could think about them later. That I could reconstruct a past—her past—even though she’d only ever lied to me about it—was one of the things that saved me. And it has nothing and everything to do with my dissertation.

But we can’t make them stay.

I think that’s partly the point. In coming to understand our dead, we also find a way to lay them to rest. This is what we do: for everyone, but also for ourselves.

Here in this room, our unspooled pasts accumulate behind us. We can’t see all of the ways they are entangled with one another. Someday, someone will. Our students. Or theirs. The historians’ historians.

That one day someone will, and that the meaning we make even now will also become evidence: these are the things I’m trying to tell you. There is not a be-gowned person in this room who would not tell you that history matters. What I want you to know—what I want all of us to know—is that ours matter, too. 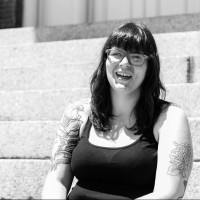 Jacqui Shine is not much into health food; is into champagne. You can call her Doctor, but she's not that kind of doctor.