How to Make Polvoron: Growing Up With a Mother Overseas

My mother melted a block of butter in an iron wok over low flame and the smell filled our home. I could almost taste the saltiness and lingering sweetness at the tip of my tongue. It was two days before New Year’s Eve and we were making polvoron — soft, crumbly, oval-shaped sweet treats made of butter, milk, flour, and sugar. Polvoron was always part of our New Year feast in the Philippines, a tradition for as long as I could remember.

“You can start laying out the wrappers,” Mama told me.

The wrappers were made of soft, thin paper, about the size of two movie posters. One side was smooth, the other rough. The paper came in different colors: red, orange, green, blue, violet, pink. Mama would fold the paper, making sure all sides met, before pressing her thumb along the folds. She started with halves, then quarters and eighths, until the paper resembled a square as big as the palm of her hand. Finally she would cut the paper using a sharp knife, following the lines made by folds to form precise squares. I placed these square-cut wrappers on the dining table, making sure one of each color was laid out.

“Don’t forget your toothpicks,” she said.

The toothpicks were markers of the number of polvoron we made. One toothpick represented a batch of ten. I would carefully stack each wrapped polvoron in a plastic container, placing a toothpick on the table for every ten polvoron. We usually made at least a hundred, sometimes more, setting aside any remaining wrappers for next year’s use.

But the year I turned eight, no polvoron was made. That was the year Mama left to work as a nurse abroad. She found a higher-paying job overseas that would better support our family and our dreams. She worked in another country for five years, coming home once a year and staying only for a month or a few weeks more, whenever her employer permitted it.

In those five years when Mama worked abroad, we wrote letters to each other. I always looked forward to receiving her letters, addressed in bright pink Air Mail envelopes that reminded me of the pink wrappers we used to make polvoron. Her letters contained stories of work and how much she missed us. My replies were about school and how much we missed her.

One Sunday every month, my mother would call us. We eagerly awaited her call in our grandmother’s house next door. My father, older brother and I took turns talking to Mama, raising our voices to make ourselves heard over the static and bad reception of trans-Pacific phone calls. We talked for an hour or so until an automated voice came on, warning us of only a few minutes left on Mama’s calling card. Then we would loudly and hurriedly say our goodbyes, still talking right up until the busy tone came on and the line went dead.

We also sent Mama voice tapes – cassette tapes containing our recorded messages. I would lock myself in my room, place the blank cassette tape into the recorder, then press the play and record buttons simultaneously. I would narrate my stories, careful not to leave out even the tiniest detail – mundane and silly though it seemed – until the play and record buttons popped up and the reels stopped turning.

During the months when Mama came home for vacation, we made polvoron again. Mama taught me how to wrap the molded polvoron: gather the diagonally opposite edges of the square wrapper until they meet in the middle, fold and flatten to the right, then fold and flatten to the left, forming a triangle with its tip to the side. Roll the remaining wrapper on both sides, just like those in candy wrappers.

While wrapping polvoron, Mama told me about her job in a Middle Eastern country. She had to adjust to the time difference, to a new environment, to a different culture. She went through challenges and triumphs, each time testing her strength and resilience. She had to deal with difficult patients and demanding bosses. She rose through the ranks as head nurse, but not without controversy and office politics.

Mama and her fellow Filipina nurses always had parties to celebrate birthdays and last days. They were usually potluck parties, where each of them would bring a specialty dish, sometimes from different regions of the Philippines. Mama would get other nurses to help her make dishes such as pancit (a Filipino noodle dish in which noodles are fried with soy sauce, sliced meat, and chopped vegetables), fruit salad, and her famous polvoron. They would make do with any ingredients on hand, or would ask other nurses going home on vacation to bring back ingredients they needed. They were always envious of those celebrating their last days — that meant they could finally go home and remain with their families.

On their days off, Mama and her fellow nurses went to the souq, an open-air marketplace. They bought items to be sent home: chocolates, canned goods, toiletries, cosmetics, clothes, bags, shoes. I remember tracing my feet on bond paper and enclosing it in one of my letters so Mama could buy me shoes that fit just right. She always had a box on hand to fill with items she bought for us; when the box was full, she sent it through air or sea cargo. These items, all handpicked and carefully packed, were sent in the hopes of fulfilling parenting duties from a distance, showing her love for us across the miles.

As I grew older, Mama taught me how to mix and mold polvoron the way she did. With every visit I learned a new step. Measure flour, milk, and sugar with care. Mix the milk and sugar together and set aside. Cook the sifted flour in an iron wok over low flame. When the flour changed from bright white to golden brown, filling the air with its dry, toasted scent, it was ready to be mixed with the milk and sugar. Sometimes while making it, my hands and arms grew numb from the constant stirring necessary to avoid any lumps.

We melted butter in the same pan used to cook the flour, then poured it over the dry ingredients to bind them. Mama would sometimes add crisped rice or ground peanuts to give the polvoron a bit more texture. We always used a polvoron mold for each one, oval in shape with a hollow upside-down base to hold the mixture. Once the base was full, the spring top was pushed down to get the molded polvoron out and onto the wrapper.

I wish I could be there was what Mama always said. She missed birthdays and school events, Christmas and New Year celebrations. She missed the small moments and the big ones, caring for others instead of her own family. But with each moment Mama missed, each day she wasn’t there, she gave us moments and days we would not be experiencing today had it not been for her sacrifices.

Growing up without Mama there taught me independence. I learned to do chores: cooking, cleaning, washing. I had my first period without my mother there; my only guidance came in the form of aunts and lessons from school. My body changed as I entered that in-between, awkward stage of being a pre-teen. I discovered things on my own and learned to care for myself. I had my first crush without my mother there. My girl friends became my confidants.

Making polvoron was as much a part of my childhood as Mama’s absence was. It was a tradition, then a rite of passage made more poignant by my mother’s brief visits home. With each return came the knowledge of a new step in the polvoron process, and with each new step came the promise of my mother’s permanent return – her homecoming. It’s now my turn to pass on the tradition of making polvoron to my future children and grandchildren. I’ll teach them how to make it, step by step, just as my mother taught me. 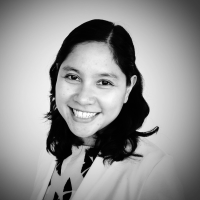 Rina Caballar is a writer born and raised in the Philippines. When she's not writing, she can be found reading a good book, enjoying the sun, sand and sea, indulging in Gilmore Girls episodes or The Lord of The Rings trilogy, and savoring chocolate in all its forms. You can follow her on Facebook or on Instagram.