On Not Being a Mom or a Dad

The doctor smiles at us across her desk. We have never met her before. She spends half an hour explaining what T’s bloodwork reveals about the fetus currently somersaulting within her uterus. The doctor repeatedly refers to the baby’s “gender” when she means its sex. As we rise to leave, she asks, “How did you decide which one of you would carry the baby?”

I hate this question. It’s one of the few moments of this pregnancy in which my body, not just T’s, is also under scrutiny from strangers. She experiences this form of invasion daily, while I’m lucky enough only to dabble in it. I feel momentary solidarity with her before the reality of our distance winds me, again. I cannot imagine having my body under constant surveillance like this. I cannot imagine not experiencing it as an invasion. I cannot imagine what it is like to want to be pregnant.

“Well, that’s easy, then,” the doctor smiles. “But it’s nice to know you could switch if you needed to.”

I am, it seems, a mother-in-waiting. An available uterus. So convenient.

On other days, I appear to be a different creature entirely. When I’m alone, the fact that I am about to be a parent is entirely invisible. When I tell acquaintances – men especially – they say congratulations. They tell me to prepare for sleep loss. They tell me I can never repay T for what she’s going through (they’re right). They say it’s my job to take care of her. They say, both teasing and utterly serious, that I need to get a better job.

Does that make me a dad instead?

The preparing-for-childbirth books, even the not-too-lefty ones, have started saying “father or birth partner.” But they also warn you that tension emerges between couples during pregnancy because mothers want to start nesting, while fathers (or birth partners?) experience “provider panic.” It’s simple biology, they explain.

You see, there’s no such thing as a parent. We only have mothers and fathers.

Here’s what I don’t mean: I don’t mean that women and men are hardwired to parent differently. I don’t even mean that the social construction of gender is so overpowering that overcoming motherhood or fatherhood is difficult for individual parents. I mean the social category of parent just doesn’t seem to exist.

I say this despite the fact that my social world is filled with people who are deeply invested in egalitarian parenthood. I personally know inspirations in the realm of splitting reproductive labor. They are not doing it wrong.

But all the good people in the world making all the right decisions about sharing, pitching in, and helping each other out can’t fix the fact that every form you complete, every book you read, every law you face, every policy you confront has two categories: mothers and fathers.

I know kids with two moms. Those families confront challenges for a number of reasons, but at the end of the day, there are two moms, and that’s okay. There’s a concept for that. For two dads, too. My kid, though – my kid has a mom and a parent. She’s not talking yet, but I’m not sure what her words will be for that experience. What words do we have?

Over Thanksgiving dinner when I was thirteen, my family agreed I’d make a really good aunt. I couldn’t explain it then, but this assertion filled me with overwhelming pride and a sense of recognition. Sitting next to my grandmother, who insisted that wearing hiking sandals instead of high heels would give me “Fred Flintstone feet,” and across from my dad and uncle, whose boys-only political debates I ached to participate in, I felt like these folks were seeing me for the first time. An aunt. That was a category that made sense to them, to me.

There would be other words to complement “aunt” over time – “independent girl,” “not a girly-girl” – and questions that effectively asked what they didn’t want to put into words: “You’re not going to become a… vegan, are you?” Vegan. It’s Southern white folk speak for queer.

They were right. As a newly minted dyke, “aunt” took on a new coziness. The rich history of spinsters, crazy cat ladies, and mysterious middle-aged world travellers living comfortably with their “roommates” felt suddenly like my history. But it also felt like a fantasy, because I couldn’t imagine growing old as a woman. Most days, I couldn’t even stand to look in the mirror.

These categories – aunt, uncle, mother, father – continued to percolate as I grew older and tried to imagine a future, one in which I made sense. I wanted nothing to do with the categories, they felt stifling, but figuring out which title was mine also seemed urgently important. I kept avoiding mirrors and chalked up body dysphoria to internalized misogyny and fatphobia.

When, several years into our relationship, T and I began discussing whether we wanted kids, all this head-spinning became more difficult to sustain. I shocked myself when my answer, immediately, was yes. But then I took it back, because I couldn’t be a mom. There was no way I could be a mom. I had no idea what I meant by that, but I knew I couldn’t do it.

My go-to answer when people asked me about our decision to have kids was this: I had never wanted kids before, because I could only envision a life in which I was responsible for all of the reproductive labor. But when I met a person whom I trusted would share the work with me, I knew I wanted to do it. This story is true, but it isn’t complete. My decision to have kids also depended on having a partner who would let me not be a mom.

I left that part out of the story I started telling, because I couldn’t explain it, and it sounded, frankly, pretty fucked up. It sounded essentializing, like I thought there was some instinctive motherhood that men were incapable of performing. Or like I wanted to be the “fun” parent, the dad, who got to be the buddy while Mom did all the hard work of changing diapers, kissing scraped knees, and enforcing bedtime.

My second coming out, as genderqueer, emerged in sync with our discussions of having kids, and it was no coincidence. Thinking about becoming a parent required me to stare my gender in the face, in all its messy capaciousness, in a way no other big life decision had. Moving away from home had felt like something I had done, not like something a woman or a man had done. Adopting a cat, going to graduate school, even getting married – they didn’t make me adopt a new name, occupy a new category. (In part, I realize now, because I avoided the word wife in favor of spouse or partner.)

Parenthood involved a naming ceremony, a ritual of stitching a new identity that I would offer, with pride and nervousness and terror, to an eight-pound bundle of brand new flesh and muscle and nerves, for her to accept, reject, question – or, perhaps, never to question, because I was inventing her normal, her family of origin, a category of person against whom all new people would stand in comparison.

How to do this as a person who is not a man or a woman, not a mom or a dad? She will see all other mothers through the lens of her mother, her tree-climbing, silly song-writing, stubborn, kind, and thoughtful mom. I will be the other parent, neurotic, impatient, quiet, thoughtful, doting, snuggly, and clownish. But if I’m not a mom or a dad, what kind of template will I be for her? Will I be the goof against whom she compares her friends’ dads? Their moms? Their aunts?

The thing is, I’ve never wanted to be a template, a member of a category who serves a referential function for someone else. But as the grown kid of a mom and a dad, it’s hard for me to see what parenthood means if this is not a large part of it.

Is a mother a person who mothers, who does the nurturing labor of motherhood? Or is a mother a female person who is a parent? She can be both, but which is more essential?

Science disagrees on why, though. Is it because women are still expected to take on more of the household labor, and therefore have less time to devote to work? Or is it because of biases against women in the workplace, where women who are mothers are perceived to be doing less work, or to be advancing more slowly, because of their childrearing responsibilities? Or both?

I’ve started asking, tongue in cheek, where this phenomenon will leave me. I’m a workaholic who wears suits. I did not give birth to my baby. I took parental leave, but I kept doing work during my “time off” (though I scaled back my hours drastically). My partner and I take great pains to split household labor equally. I do not devote more of my time to household labor than my partner does, and my workplace knows that I have a female partner, a mother to my child, at home. Will I get the benefits of being a working dad? The penalties of being a working mom? A little of both? Or something else entirely?

Even in these intensely important discussions about gendered divisions of labor and the gendered meanings of parenthood in which I am a participant – even here, motherhood and fatherhood are so embedded, so ingrained, that we do not have a way to talk about how gender works when it’s separated from sex.

My kid and I, we’re fine. She knows who I am, and for right now, she sees me more clearly than anyone I’ve ever known, because she doesn’t know yet what it’s supposed to mean to be a man or a woman, or a mom or a dad. She just knows me. She giggles when I tickle her. She reaches for me when she bumps her head. At nine months old, she gets misgendered a lot too.

But I see how people struggle to understand us, and soon she’ll notice that too. Then what?

When I was a burgeoning feminist seven year old, I used to inform adults with glee that “girls can do anything boys can do, except be a dad.” I’ve revised my position on this point. But it’s quite clear to me now why that was the obvious final frontier to me then. It’s hard to imagine a dad who’s not a boy, a mom who’s not a girl, or a parent who’s not one (and only one) of the two. 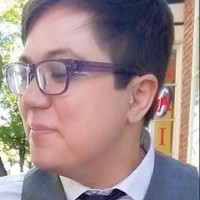 B.A. Beasley writes about labor, money, cities, and gender. They have three cats and one very cute baby.