Misadventures in Halloween Costumes: Searching for a Feminist Star Wars

Every year, I get really excited about my Halloween costume. I don’t even have a good excuse for wearing a costume on Halloween. I’m 31 years old. I don’t have a list of parties to go to, and I don’t have any kids. I could greet trick-or-treaters in jeans and a t-shirt, but I don’t. No “slutty Halloween” either for me, as it happens. I understand the appeal of having one night a year when you can forget about dressing for school, work, or whatever, and just experiment with being who you fantasize being. But for me, personally, the fantasy is not about as much cleavage as I can get away with; it’s about wearing something unique, something that allows me to pretend I’m a beloved fictional character. I can still feel the texture of the orange yarn on my homemade Rainbow Brite wig from pre-school. I remember the blue holographic fabric in the dress my great aunt made.

This year, I will be Ahsoka Tano, a character in Star Wars: The Clone Wars animated series. I bought blue tinted contacts to match her eyes and orange makeup to match her skin tone. For lack of time, I’ve purchased a pre-fab costume and foam headpiece to mimic her blue and white head tails. I’m really excited, but it’s been a journey. I started watching the show because of my husband. My first impression was that the characters’ bodies were impossibly thin and everyone had gigantic doe eyes. I also noticed that while male Jedis wore flowing robes, Anakin’s female Padawan, Ahsoka Tano, scaled mountains in a bandeau and a skirt.

As the show progressed, Ahsoka Tano matured and so did her wardrobe, still form-fitting, but baring less. I began to notice that the villains have the kind of nuanced back-stories that make you feel for them and love them, despite the despicable things they do. Savage Oppress, for example, was once a man who chose to sacrifice himself to the Night Sisters for his brother, only to be converted through the Night Sisters’ magic into a monster that kills that same brother. I began to notice that several episodes pass the Bechdel Test, the set of three questions (known to many feminists) to help judge gender bias in media.

First, the show has multiple female main characters. This allows for a variety of female characters such as Asajj Ventress, the strong and brutal Night Sister, and former Sith Apprentice, who deals Savage Oppress’ cruel fate. It allows for Ahsoka Tano, the young Padawan, eager to prove herself but learning from her mistakes along the way. It allows for Senator Amidala, who is peaceful and compassionate, persuasive and brave, clever and resourceful. There are a number of other female guest characters throughout the series, such as slave-driving queens and strong revolutionary leaders. Certainly, meaningful glances and the briefest of encounters let us know who is romantically into whom, but the show is not about to even imply that any female character is there merely as a love interest. The second and third questions of the Bechdel Test ask whether the women talk to each other and whether they talk about something other than the male character(s). When the women of Clone Wars are together, they do not talk about “boys”. They talk about social matters or battle strategies. In one particular episode, Senator Amidala and Senator Bonteri show Ahsoka Tano how there may be friendship even among people who disagree on political issues. These women solve problems. The name of the episode is “Heroes on Both Sides,” and here “heroes” refers to a female lead cast.

By the end of the last season, Asajj Ventress, having been betrayed by her Sith Master, and having lost her sisters, becomes a bounty hunter living in a fringe society. Showing some uncharacteristic compassion, she assists Ahsoka Tano, who is on the run, falsely accused of murder. Fellow Jedi Barriss Offee has framed Ahsoka. By fooling Ahsoka into trusting her, Barriss gets Ahsoka newly arrested and obtains Ventress’s two light sabers. When the betrayal is discovered, Ahsoka Tano is invited back by the Jedi council, but she declines and leaves the Order.

The climactic episodes for this arc star three females as the main characters: the wrongly accused hero, Ahsoka Tano, the reforming villain, Asajj Ventress, and the unexpected traitor, Barriss Offee. Asajj Ventress and Ahsoka Tano have crossed paths as two resilient women who have left their respective sides, the dark side and light side of the force. Unlike Anakin Skywalker, whose passionate disagreements on one side will ultimately lead him to an extremely dark fate on the other side, it seems these two women might just find a way to function, balanced between two opposing sides, like yin and yang. It is no wonder they each happen to carry two light sabers. A storyline like this might leave you, as it has me, on the edge of your seat. Thankfully, just recently, executive producer Dave Filoni announced that after some delays related to Disney’s purchase of Lucasfilm, a sixth and final season of Clone Wars releases in 2014, as well as a new project, Star Wars: Rebels. Let us hope Filoni will continue with feminist-friendly storytelling. Star Wars: The Clone Wars is what feminist programming should look like. It’s not “trying too hard” to send the message that women are strong. It shows by example that an action-packed show can have intelligent storytelling and–gasp–star a female lead cast of characters.

These characters are the kind that little girls (or grown up girls, like me) should be dressing up as for Halloween, but when I did my first Google Images search for Ahsoka Tano in the hope of getting inspired, my heart sank. The first image was a fan art of Ahsoka Tano on her hands and knees with her butt pointed out. There were many sexualized images of her spreading her legs or bending over to show her underwear. There were several images of her in Princess Leia’s slave bikini, two of which were mock covers of Playboy. There were some of scantily clad Ahsoka kissing Aayla Secura, another female Clone Wars character, also scantily clad. And then there was this brilliant piece, entitled “Hot Chick – Ahsoka” (right).

It only takes a casual walk through a comic book store to see that there are those who create and view sci-fi through a lens of sexual fantasy. What I am seeing here, though, is a disconnect between female characters written with a complexity that defies sexual objectification and the boys and men who persist in viewing them merely as a body to be enjoyed, an image to be manipulated for their own sexual pleasure. I, for one, am deflated but not deterred. I more strongly believe that we need to support television shows with female main characters that are more than a sexy image, especially those that influence our young people.

(the author, victorious at last) 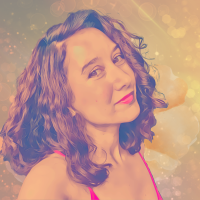 When she’s not writing about feminism or Star Wars, Estella Ramirez writes songs and poetry. She loves singing, and she is currently a private academic tutor in Los Angeles.