Women of the Starship Enterprise

During its legendary first five-year mission under Captain James T. Kirk, the USS Enterprise gave a start to some of the most well-known and well-decorated officers in all of Starfleet. Several of those now-famous officers were women: who doesn’t know the names Nyota Uhura, Christine Chapel, Janice Rand? They stand as an example and inspiration to women young and old throughout the known universe. However, while they are all undoubtedly outstanding Starfleet officers, they were also not the only amazing women to serve on that ship. Today, we’re going to look at several other officers who served aboard the USS Enterprise who deserve some recognition!

Kazue Tamura served in the Operations division as a yeoman during her time aboard the USS Enterprise. At the time of launch, she was the third youngest enlisted crew-member aboard the ship, having gone directly into an abbreviated administrative track at the Starfleet Technical Academy after finishing high school. Despite her schooling as an administrative assistant, while aboard the Enterprise she sought out training in weaponry and martial arts, and won first place at the informal Annual Marksmanship Competition held by Captain Kirk in 2269 and 2270. After her tour with the Enterprise, she enrolled in the four-year program at the Starfleet Academy, majoring in Security. During her time there she was one of several female Starfleet officers whose complaints about the pressure on female officers to wear short, revealing uniforms led to a fleet-wide uniform redesign. After graduating from the Academy, Tamura served on several other starships, eventually making head security officer on the USS Hood. After retiring, Tamura emigrated to Vulcan to be with her husband, Arev. They currently live in Raal with their two young daughters.

Charlene Masters served aboard the USS Enterprise in the Sciences and Operations divisions at the rank of lieutenant. She grew up on Martian Colony 3, where she attended a local university at which she studied both spaceship engineering and architecture. She then applied to the Starfleet Academy in San Francisco, where she majored in Botany with a concentration in Subsistence Agriculture. In 2263, Masters helped to design scientific and agricultural greenhouses that were to become standard on refitted Constitution-class starships. During her time on the Enterprise, she counseled several alien colonies on the most effective way to grow crops in order to feed their growing populations. After the five-year mission concluded, she left Starfleet to return to her home colony and start her own business growing specialty food items in greenhouses she designed and built herself. She is most well-known for her coffee beans, which are prized as some of the best in the galaxy. She still consults for the Federation on greenhouse design and colony agriculture.

Elizabeth Palmer served as a lieutenant aboard the USS Enterprise in the Operations division. She was also certified as a bridge officer. Palmer was born and raised on Alpha Centauri and was valedictorian of her highschool before attending Starfleet Academy, where she majored in Xenolinguistics. She wrote her thesis on the variations between several urban Andorian dialects, and it is still cited as a foundational work in the field. After graduation, she married fellow cadet Sarah Rodgers, and they had a son (Maurice Rodgers-Palmer) while both were stationed in San Francisco. In 2264 they divorced, and Palmer took a position aboard the Enterprise for its seminal five year mission. During her time on the ship, Palmer taught informal language classes to her fellow crew-members and continued her research on Andorian language and culture. After her tour with the Enterprise concluded, she served on two other Constitution-class starships for several years until she was offered a teaching position at the San Francisco Starfleet Academy in the Xenolinguistics department. She is now the head of the department, and continues to teach several upper-level classes on the Andorian language. 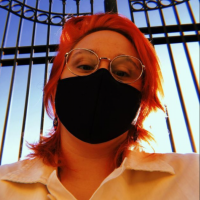 Aimee Fleck is a freelance illustrator and writer with a particular interest in fashion, feminism, and science fiction. Her most recent publication is DAMN GIRL THAT STYLE IS FAT, a basic style guide for plus-size women.