You Can Take It In Spades

At the blood donation center
I am my most brave self and it is early early,
but I’ve been up for a while. I had to eat
breakfast, a strange undertaking. I stood
over the sink chewing a chunk of baguette
that did not want to go down.
Remember when I bet you twenty dollars
you couldn’t eat a slice of Wonder Bread
in under a minute?

The nurse asks which finger I prefer to be
pricked on. I offer my right index, but she gives
it back, says it has to be a middle or a ring.
I offer my left ring. It hurts and the blood is
a small black pearl.

Remember when we were dressed as Santas and
got into a fight on the street walking home?
It may be illegal for two people to be so ridiculous.
Remember when you rode the bus with me
all the way to Portland to see my mother after
she put herself into a coma? One of us should
grow up, own a car.

But thank you is what I meant.
Now you’ve moved away. You’re in AA
and have Amends for me.
You prefer to make them in person, you say.
I want them but I don’t. I picture them
as a package wrapped with string that you
would hand to me. I could finger the paper, shake it
a little. I could place it on the top shelf of my closet,
push it just out of sight.

Everything happens to everyone else.
My blood fills the bag slowly. I have to squeeze and squeeze
this ball, and then a bigger one the nurse brings out
because of how slow.

For your birthday I got up early and baked
a cake and threw it outside for the birds.
Your birthday is for the birds.
I left the door open, let the cold come
pouring into the living room.
Your birthday is for the living.
Look: I found pictures of you as a child
to make confetti. When I toss it into the air
it falls like snow, and your birthday is freezing;
the snow sticks and drifts.
I could build an igloo here on top of this bed.
Out front there are animals, there are people gathering
at the windows to peer in.
I’ll go out and make them sing for you, make them
carve all the trees into candles, light their tops.
For your birthday everything has to do what I say.

When all of my hair fell out in the movie theater
I didn’t want to cause a scene,
so I gathered it up into a ball, stuffed it
into a half eaten tub of popcorn.
I nudged my friends in the dark.
I showed them my naked head, gleaming
with smears of butter.
“It looks fine,” they whispered. “It looks better!”

Every last one of us in the audience cried at the end of the movie
when _____ came back and admitted how he felt about _____.
They’d done her hair caramel, with honey streaks. 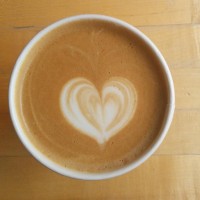 Melissa Chandler lives and writes in San Francisco and doesn't like the fancy movie theater where they make you choose your seat before you even go in. She's on Twitter.