The Chickenhead In Me: Hip-Hop Feminism

I can remember the precise moment I fell in love with hip-hop. It was 2003, and I was 14. I was mesmerized when the first notes of Nas’ “Ether” rattled the radio’s speakers. His raspy voice and aggressive cadence captivated me as he hurled insults for more than four minutes at fellow rapper Jay-Z. By the time the last notes faded off the radio, I had been transformed into a hip-hop disciple. I saved my allowance for two weeks so I could purchase Nas’ album, and I listened to it every day until I’d learned every word of every song. I purchased Nas’ entire music catalogue over the course of six months, and then I did the same with NWA, Snoop Dogg, Rakim and a host of other MCs. I fell in love with hip-hop, even as I realized the art form often excludes and degrades female bodies like mine. It is through this hyper-masculine, patriarchal and heteronormative culture that I developed a feminist politic capable of both loving and interrogating institutions like hip-hop.

According to Andreana Clay, associate professor of sociology at San Francisco State University, the kinship between feminists and hip-hop lovers is often driven by a connection between the music and their lived experiences. She pinpoints her love for hip-hop in the complex work of Meshell Ndegeocello. For Clay, Ndeogeocello’s magnetism rests in her experiences as a self-identified Black-American bisexual feminist. Finding strands of that infused DNA in Ndegeocello’s identity and music fuels Clay’s bond to a culture that often uses words and imagery to reinforce female degradation and objectification.

It is the stories that hypnotize me. Hip-hop serves as the soundtrack to my pubescent development. Certain songs connect me to specific memories. I am immediately transported to a turbulent long-term relationship I had with a drug dealer when I hear the Notorious BIG’s “10 Crack Commandments.”

Rule nombre uno: Never let no one know
How much dough you hold ‘cause you know
The cheddar breed jealousy ‘specially
if that man fucked up, get yo’ ass stuck up
Number two: never let ’em know your next move
Don’t you know Bad Boys move in silence and violence?
Take it from your highness
I done squeezed mad clips at these cats for their bricks and chips
Number three: Never trust nobody
Your moms’ll set that ass up, properly gassed up
Hoodied and masked up, shit, for that fast buck
She be laying in the bushes to light that ass up
Number four: I know you heard this before
“Never get high on your own supply”
Number five: never sell no crack where you rest at
I don’t care if they want a ounce, tell ’em “bounce!”

I see the tormented face of my former love. It is eating him up that he must bypass $100 because we’re together. He refuses to pass a cocaine sack to a student sticking a Benjamin in his face. He pretends he doesn’t hear the request because I’m standing beside him. There are things I’m not supposed to see, hear or understand. Biggie reminds me of how raw that experience was.

Yet, I recognize how problematic hip-hop is. I cringe every time a rapper easily lets the word “bitch” or “ho” fly off his tongue. He’s not rapping about me, but he’s rapping about me. I feel that and I choose not to ignore it. Hip-hop feminists don’t ignore the hip-hop culture’s misogyny. Instead, in the words of scholar Whitney A. Peoples, we advocate for a space to develop a “feminist consciousness that allows [hip-hop feminists] to examine how representations and images can be simultaneously empowering and problematic.” I’d had a turbulent relationship with hip-hop for more than a decade before I was introduced to feminism. Terms like patriarchy and sexism were unfamiliar to me before college, but I can remember feeling objectified when the Ying Yang Twins released “Get Low.” It hurt to hear the Atlanta rappers position women as sexual objects in their lyrics. “Get Low” caused me to question my allegiance to hip-hop.

However, I remained invested in the culture because hip-hop was also a site of empowerment for me. The work of women in hip-hop, like TLC, reinforced my hope for what hip-hop can be. T-Boz, Left Eye and Chilli used music to promote female empowerment. They rapped and sang about HIV awareness, casual sex and gun violence, and I was enthralled with their smooth melodies and uptempo hip-hop beats. Another example of this empowerment is seen on Living Single, a show that featured four Black American women residing in New York City. I watched Living Single as a child, and I admired the courage of the female characters. All four women were feminists. One of the characters, Kadijah James, is the publisher of an independent hip-hop magazine. She is the figure that sparked my interest in media. I credit my desire to be a magazine publisher to that early influence.

The paradoxical messages of hip-hop offered me a space to develop a critical feminist lens, after I’d dismissed feminism as a movement not built for me.

I’d come to associate feminism with White women invested in burning bras and excluding men, so I had no interest in the feminist label until I was a college senior. I viewed feminism as an ideology with inherent characteristics, and this is due in part to the work of second-wave feminists. Second-wave feminists, both Black and White, placed barriers on the development of feminist identity. Perimeters like not befriending patriarchal men, not profiting on feminist work and embracing all women regardless of their personal politics excluded some women. As Rebecca Walker puts it, those feminist barriers removed all signs of “individuality, complexity or less than perfect histories” in the feminist(s) movements.

I didn’t see how I could be a feminist when I’m invested in a sexist culture like hip-hop.

I didn’t have an intervening space between White woman’s feminism and Black man’s hip-hop until June 2012.

I was preparing to begin graduate school when I discovered Joan Morgan and hip-hop feminism. Morgan’s When Chickenheads Come Home to Roost shifted my perspective of feminist identity because she advocated for a space to both participate in and critique hip-hop. Morgan’s coining of hip-hop feminism gave me the tools to critique the messages within rap music lyrics and imagery. For the first time, I believed there was a space for me to enter feminist consciousness without disavowing from the culture I’d come to love.

Some feminists can’t reconcile hip-hop and feminism. One degrades women while the other advocates for equality, but my feminist lens has been strengthened through my commitment to the hip-hop culture. Hip-hop feminism is not solely an identity to me. It is a framework that I employ to examine representations of Black American women in romantic comedies. Film criticism exists outside of hip-hop, but researching the paradoxical discourse around Lil’ Kim and Nicki Minaj is beneficial in understanding Black female sexuality. Examining Lil’ Kim reveals how women in hip-hop are constructed as hypersexual jezebels leveraging their bodies for album sales. However, contextualizing her lyrics and career also shapes Lil’ Kim as a woman wrecking the dominant hip-hop discourse through her subversion of male bravado and bold sexuality.

I recognize the exclusion and degradation of women in hip-hop, but I remain dedicated to the hip-hop culture because it’s not inherently violent, misogynistic and exclusionary. Capitalism and the exploitation of Black artistry commodified hip-hop, according to Peoples. She asserts capitalism relied on tropes of Black American men as untamable and aggressive to present a “never-ending obsession with monetary gain, appropriation of patriarchal notions of power, material possession, partying, women, and sex. But there is power in hip-hop. It can be used for social good, like exploring issues in communities of color. NWA’s Fuck tha Police is an example of how hip-hop can be used as activism. In Fuck tha Police, Ice Cube raps:

Fuck the police coming straight from the underground
A young nigga got it bad cause I’m brown
And not the other color so police think
They have the authority to kill a minority
Fuck that shit, cause I ain’t the one
For a punk motherfucker with a badge and a gun
To be beating on, and throwing in jail
We can go toe to toe in the middle of a cell
Fucking with me cause I’m a teenager

NWA’s lyrics are violent and vulgar, but Ice Cube is also discussing important social issues like racial profiling and police brutality. This is the hip-hop I fell in love with and continue to support.

I’m a millennial raised in the “post-Civil Rights, post-feminist, post-soul generation” who embraces hip-hop as an outward expression of my inner voice. Hip-hop feminism created a platform for me to develop a complex, contradictory feminist politic that is authentic to my lived experiences. I love hip-hop, and that makes me no less of a feminist. 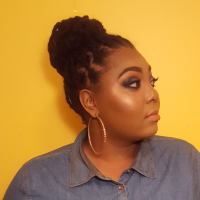 Evette Dionne is an editor and cultural critic whose been published in The Root, XOJane, Bitch, Bustle and others. This Bennett College alumna is based in Illinois.