Hello, Handsome: On Never Being Beautiful

Previously in the Trans* Series.

When I was little, I grew accustomed to the quiet assurances of adults, usually women. “One day you’ll be pretty,” they would say. “You’ll have to beat the boys off with a stick.” I knew both of these were lies, but I couldn’t figure out which was farthest from the truth. Grown-ups were often feeding me lines about a better tomorrow. Maybe I would be more popular, happier, but no, not pretty. I heard not a promise but a lament, an admission that I didn’t have what was important. One day you will be something that you are not now.

The only compliment on my appearance that I can remember ever receiving as a child came from my first grade teacher. She said the highlights in my hair were beautiful. Auburn, she said. Wine-colored.

That year a pair of girls tormented me. It was a small school, a small class—the year before there were only nine of us. Ashley and Gina. They threatened to give me makeovers like they did to the boys. I didn’t know that my existence could be so offensive. Why don’t you ever play with the girls? I don’t remember which one of them asked me—Ashley, probably—but my father proudly repeated my reply for weeks. Because I don’t like girls. Not entirely accurate, but I didn’t consider myself the same species.

In eighth grade I moved to a private school, into the stew of hormones and insecurities and friendships already nourished for years. The first words any of my classmates spoke to me were “You can’t sit there.” The worst part was PE, where they would give the entire grade the opportunity to hit each other with various athletic objects. Technically it was two classes, but we would mostly co-mingle—except for that first day, when two roll sheets split us into two fidgety lines of boys and girls on opposite walls of the gym. That was how I learned that the number of girls in my grade was exactly one more than the number of boys—when Coach Pflug called my name to line up with the boys. Oh, I guess they just arbitrarily put you on my roster, he said. It’s just for roll call.

I was fifteen when a girl kissed me for the first time. It wasn’t until months later that she became my girlfriend. In the dark, in her bedroom, she would call me beautiful. I never corrected her. I would have let her call me anything, would have believed anything about myself if it meant she would stay. But even then I knew she wasn’t right.

In college I went through a string of tiny relationships. It’s not that I ever juggled multiple women so much as pined for them simultaneously. Their roommates pitied me. “If you were a boy,” one said, “you’d be the perfect boyfriend.” Girlfriends, crushes—they sometimes called me beautiful, in the dark, in their dorm rooms. I was ungrateful. Well, I think you are, they would say. It’s a compliment. I’m giving you a compliment.

Graduation was makeshift ponchos and wet chairs. My father had been snippy during his entire visit, angry at the hotel and the rental car and my terrible sense of direction. On my ancient computer he paid for a new plane ticket home. He cornered me into a lecture on the red line at the volume level it takes to have a conversation across a subway car. My mother must have been in the seat next to me while he told me I dressed like a longshoreman. “I think you’re a very beautiful person,” he said, “who goes to great lengths to make yourself look ugly.” You have ensured you are not that which you could be.

I don’t remember asking my fiancée not to call me beautiful. It must have been very early on, probably in that phase where every detail seemed important, where conversation trumped sleep. Each admission a small test. Do you still like me? What about now? I may not have even asked—I could have just admitted that the word felt wrong against my skin. That I didn’t like how it only seemed to be breathed behind closed doors. That if it was a compliment I didn’t want it, especially if I could only have it with my clothes off.

In more than five years she has never called me by my first name. Not once. When we introduced ourselves in my brother’s living room, waiting for the next parade down Magazine Street, realizing no one was going to do the introductions if we didn’t, she didn’t ask me about my “real” name. She didn’t ask what my initials stood for. I’ve heard the question so many times I’ve come to expect it. What’s your real name? I know more than a few of them are asking What are you? What’s your girl name?

She calls me handsome. Hello, handsome. That used to be an option, to be a handsome woman. Hepburn comes to mind. When the word leaves her lips it feels right, the way those promises (threats?) of beauty never did. I am her guy and a gentleman, but I was once her girlfriend. She knows to use female pronouns, just like she knows I sometimes need an escort to the women’s room.

This is not an issue of self-esteem. This is not me feeling ugly. (And not pretty is not the same as ugly, for the record.) Complimenting my beauty feels like being praised for my fluent German, or for being a llama. It feels viscerally wrong, but also factually inaccurate.

I don’t mean to downplay the importance of preferred pronouns—they are important!—but there are nouns I prefer, too, and adjectives. It is exhausting to try to convince one person that words matter, much less everyone I meet. I don’t always have the energy to correct all those little slips or accept “compliments” graciously.

All the more important, then, to have a partner who never slips. The compliments she gives me don’t have that tiny hitch of a foreign phrase, of the brain reminding the lips to behave a certain way. The words I prefer are as natural to her as saying hello. She never tried to convince me that I was pretty. She never insisted it was a compliment. 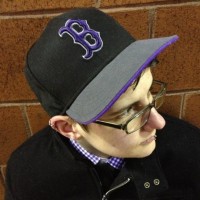 mk Eagle is a high school librarian known to wrap things in bacon. She lives in Boston with the best partner ever and two utterly ungrateful cats she feeds popcorn to anyway.