On Her Blondeness: The Semiotics of Taylor Swift’s Hair

While performing at the Grammys in January, Taylor Swift’s hair did something: it flipped – or, more accurately, it was expressively tossed by the anguished throes of her head and neck. Swift did a bit of heartbreak induced head-banging, her backlit golden hair looked haloesque, and it moved fans to wallow in a briny pool of their own tears.

Swift’s hairography is something worth talking about. From the blonde ringlets of her early country music days to her to the long, straight locks of her mature oeuvre, Swift’s hair (and the obsession with it) has always had a life of its own. And that ever-expanding life was on full display during her Grammy performance: A few hair vigorous flips – coupled with some pointed looks – signified the transformation of Taylor Swift from a spurned naïf into something more potent, maybe even more sexual.

But why is Swift’s blonde hair so powerful? Its power isn’t about Swift qua Swift, it’s about the literary power of blonde hair and writerly preoccupation with that power. Swift’s carefully choreographed hair flip tapped into that long cultural fascination. Swift could shift between virtuous and wayward simply by whipping her blonde hair. Yes, it was downright literary.

Literary blondes have always held a totemic power. Well before the contemporary age of the “dumb blonde” joke, many writers found in blonde hair an ideal vehicle for expressing a debauched interest in female sexuality. At the same time, golden hair became the crowning glory of saintly femininity. Writers might have disagreed on what kind of sex appeal blonde hair had – angel or devil, pick your fetish – but they agreed that it was sexy. This poetic construction of ideal beauty was purposefully very white; blondes, a kind of “unspoiled” whiteness, often stood in for an ideal Europe whose beauty needed to be untouched by colonial expansion. The link between blondeness and nationalism (compounded with nineteenth-century science) was solidified in the twentieth century. Sex, politics, and power: fictional blondes had it all.

Renaissance poet Petrarch might be to blame for all of this: his ever-idealized dream girl, Laura, couldn’t stop getting her blonde hair caught in Florentine gusts. “Breeze, blowing that blonde curling hair, stirring it, and being softly stirred in turn, scattering that sweet gold about, then gathering it, in a lovely knot of curls again,” he writes in Sonnet 227.

But every age gets the blonde fetish it deserves. And if Petrarch and his followers were content with innocently inhaling golden hair from afar, letting their lusts going forever unconsummated, then the Victorians wanted desperately to consummate.

They did so in a particularly nineteenth century way: pushing and pulling through innuendoes. The untamed mane of Robert Browning’s Pauline envelopes the poet so that he may “unlock the sleepless brood/Of fancies from my soul, their lurking place.” Blonde hair is a protective muse, releasing poetic prowess.

Of course, for Browning this obsession with hair’s creative power wasn’t just a metaphor. Over the course of his courtship with Elizabeth Barrett (sadly, a brunette), he constantly asked for a lock of her hair:

What I have always dared to think I would as you for…one day! Who never dream of being worth such a gift…give me so much of you—all precious that you are—as may be given in a lock of your hair.

I never gave away what you ask me to give to you, to a human being…never, though reproached for it, –and it is just three weeks since I said last to an asker that I was “too great a prude for such a thing”! it was best to anticipate the accusation!—and prude of not, I could not—I never could—something would not let me.

Charles Dickens, unsurprisingly, championed virginal blondes with angelic powers. In A Tale of Two Cities, Lucie Manette’s long golden hair restores the health of memory of her long imprisoned father. When upon seeing his daughter the amnesic doctor cries out: “What is your name, my gentle angel?” When Dr. Manette reaches for Lucie, “His cold white head mingled with her radiant hair, which warmed lighted it as through it were the light of Freedom shining on him.” Since it’s a Dickens novel, Dr. Manette is, of course, immediately restored by the virginal powers of angelic womanhood. But if blonde hair is restorative, then it’s also procreative. Once married Lucie’s hair is “the golden thread that bound them all together, weaving the service of her happy influence through the tissue of their lives.”

Poet/painter Dante Gabriel Rossetti took Dickens and Browning’s cloying hints of blonde hair’s sexuality – its woven procreative and poetic nurture – and went full on down and dirrrty blonde girl. When Rossetti writes of the biblical Lilith, in the sonnet Body’s Beauty that “her enchanted hair was the first gold,” he is alluding to a long literary tradition of golden-haired ladies. Rossetti’s Lilith isn’t just a blonde to be admired, she’s a “witch” who weaves “round his heart one strangling golden hair.” In Rossetti’s estimation, flaxen female sexuality was otherworldly, dangerous and even deadly.

The death-fetish wasn’t just for men. George Eliot put the poetic metaphor to more sophisticated use in Middlemarch. Poor Dr. Lydgate is entrapped by the “infantine blonde” of Rosamond Vincy’s “wonderous” hair plaits. Eliot smartly posits (and maybe even satirizes) a connection between Rosamond’s perfectly coifed blonde hair and her industrious lacing and netting. Eliot lays it out pretty plainly: blonde Rosamond is weaving her web. Lydgate cannot, of course, resist, his escape is no longer possible when he finally notices that Rosamond’s hair and handiwork was a matrimonial web that hopelessly trapped him. Lydate had imagined, in his “old dreamland,” that Rosamond was “that perfect piece of womanhood who would reverence her husband’s mind after the fashion of an accomplished mermaid, using her comb and looking-glass and singing her song for the relaxation of his adored wisdom alone.”

Sadly, poor Lydate was not well versed in the mermaid fantasy he constructs for Rosamond – as the narrator of Vanity Fair points out, mermaids are “fiendish marine cannibals, reveling and feasting on their wretched pickled victims.” In some surreal sense Rosamond is an “accomplished mermaid,” she lures a man with his beauty only to suck the life out of him. George Eliot, in her infinite wisdom, saw that the sexual enticement of blonde hair was mermaid-like: deceptive, monstrous, and cannibalistic. That’s probably why Dorothea was a brunette.

But if writers couldn’t agree on whether blonde sexual allure was deadly or maternal, they could on agree on one thing: DON’T CUT YOUR HAIR. DON’T EVER CUT YOUR POWERFUL BLONDE HAIR. In poet Christina Rossetti’s Goblin Market the aptly named Laura, longing for “goblin fruit,” laments her poverty, the goblins reply:

“You have much gold upon your head,”

“Buy from us with a golden curl.”

She clipped a precious golden lock,

She dropped a tear more rare than a pearl

Then sucked their fruit globes fair or red

Sure, this poem is about trading hair. Christina Rossetti, always a great public hater of her brother, Dante Gabriel tells it like it is: Use your blonde hair for profit or pleasure and you’ll end up sucking fruit globes.  But Christina Rossetti also finalizes the strange intersection of the blonde fantasy – a simple trim can move a blonde back and forth between two sexualized fetishes. But whatever you do, Swift, don’t pull a Jennifer Lawrence and cut your hair because, as W.B. Yeats would have it, “Never shall a young man… Love you for yourself alone/And not your yellow hair.”

http://www.youtube.com/watch?v=n376SSohb74
That’s why Swift’s Grammy performance was so fascinating. When she walked the pre-show red carpet, she wore her hair tied in a vintage inspired-ponytail – everything about it said prim, proper, virginal. But when performing her heartbreak ballad “All Too Well,” down came long, flowing locks and out came the emotional hair tossing. With a flat iron and a great blowout, Swift signified her transition from angelic femininity to accomplished mermaid – no need for the purposefully scandalous performance à la Christina Aguilera or Miley Cyrus; Taylor Swift’s blonde hair does it alone.  As the New York Times’ Jon Caramanica joked, “So impressive how Taylor as gone from the teenage door-busting threat…to a 45-year-old adult contemporary balladeer in just five years or so.”

Swift’s music, of course, has always walked the line between virginal disappointment and scorned revenge taker. In turn, that’s entered a broader conversation about Swift and her very public relationships: is she simply a victimized by men who don’t share her domestic fantasies or has she ensnared them in her ever-growing web? It’s nice to see her hair finally get in on the action. Hopefully her hairography will forever expand – maybe one day she’ll take a page from John Keats’s La Belle Dame Sans Merci and murder an unsuspecting knight with her flaxen web. 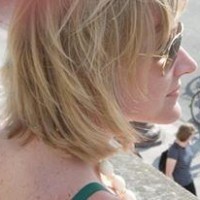 Stassa Edwards is a freelance writer and PhD candidate living in the Deep South. For more of her misguided opinions, you can follow her on Twitter.