Teri Polo approached the dais. A medley played in the background, an eclectic mix: first Enya, then something from a 17th-century composer she couldn’t quite identify (but would probably recognize if you named him), then ELO. ‘Don’t Bring Me Down.’ ‘Evil Woman.’ Every song in their entire catalog (or ‘catalogue,’ if you’re in the UK.)

A voice greeted her from the bed: ‘Your eyes are as beautiful as the Arno, your hair as glistening as the fields of Erin, your bosom – two dazzling orbs.’

It was her. Lena Olin. She commanded the room like Cleopatra – she’d even donned a sepia robe and an ankh around her neck. All she was missing was an asp at her breast. She sensed Teri had a yen for something to nosh on, so she offered her a smorgasbord of delights: mead from an antique ewer, petit fours, slices of edam, brie and bleu cheese, a dab of aioli. The aroma was entrancing.

‘Let’s eat in,’ purred Lena before grabbing the long, silk obi wrapped around Teri’s waist. Her robe fell open. Then Lena opened her palm to reveal two tabs of LSD.

‘We haven’t done this since we both attended that liberal arts college upstate,’ gasped Teri.

‘Ah so,’ replied Lena wryly. ‘I remember it fondly. You cheering for the Bosox, me for the Chisox…’

‘And remember all those parties set in the Jazz Age?’ asked Lena. ‘And how we wanted to get a dog? You wanted to call it Asta but I insisted on Rin Tin Tin!’

‘You know… you’re still as graceful as an okapi,’ said Teri, wistfully.

‘Are too!’ was Lena’s comeback.

Teri ran her hand along the nape of Lena’s neck. Lena did her part directing Teri across her body, between moans, more accurate than any GPS. ‘Mmm, more NNE,’ she said. ‘Now NNS… SSE….SSE…’

Lena smiled coyly then reached into a ceramic olla, scooping up a palmful of oleo, applying it to Teri’s torso. Teri followed her lead, aping her perfectly, spreading the pale, creamy substance up and down Lena’s digits.

Soon enough their axes crossed and they worked their way to an apex of desire, an acme of passion, with all the power of a fleet of SSTs.

Panting, they fell back onto the bed.

‘I haven’t been this out of breath since we last played jai alai,’ confessed Teri.

As they drifted off to sleep together, Yoko Ono began to play over the stereo. 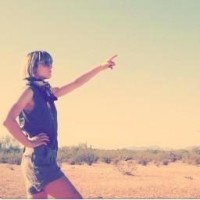 Eve Thomas is a writer and editor based in Montreal. Find her tweeting about five-star hotels and private jets, posting her work at evethomas.com or telling jokes on one of her 48 secret tumblrs.