Literary Characters I Would Not Invite to a Dinner Party

Seymour is first to arrive, twenty minutes early. He carries a book of German poetry that he gives to the host as a gift. Upon discovering that the host does not speak German, Seymour suggests putting the silly party on hold so that the host can go learn German fluently enough to read the book in its entirety. He’ll wait.

“Where is everyone?” he says. “Off getting their hair dyed mink, no doubt.” He picks a cloth dinner napkin up off the table, lies posterior on the floor, and fashions the napkin over his eyes as if trying to block out a heavy sun. When asked if he cares to sit at the table, he says he is seriously considering it.

Seymour is difficult to engage in conversation. One must find a topic that truly interests him. So far, that list includes astrology, the piano, and children’s books. A discussion on the latter goes nowhere when he accuses the host of staring at his feet, and won’t accept protests to the contrary.

Catherine walks in the door, throws her wool coat into the host’s arms, and announces that she was attacked by a pack of wild dogs on her way into the house. As such, she will require lodging for the night, if not the next month. Upon inspection, the pack of dogs turns out to have been one single dachshund from next door who rubbed against her leg. When given these facts, Catherine scowls and limps into the dining room, putting the weight primarily on her dog-mauled leg.

After a glass of mulled wine, Catherine has warmed up considerably. She bursts into hysterical high-pitched giggles at both appropriate and inappropriate moments. She chatters and smiles and throws back her head like a maniac. Alas, by the end of her second drink, her mood has plummeted yet again. When offered an appetizer, she replies, “It would degrade me to eat this cheese puff now.” Then she stands and bursts out the back door, where she runs into the distance screaming, “Heeeeeeaaathccllliiiifffffff….”

Mrs. Danvers gives the appearance of someone who has just been forced to eat a lemon, but has secretly enjoyed the experience. She offers to help set the table, but this is a ruse that allows her to criticize the flatware. “Tarnished,” she says. “Some of the finest moments of my young life consisted of polishing Rebecca’s silver.”

In contrast to the nonsensical rambling of Catherine and Seymour, Mrs. Danvers has the ability to carry on a conversation. Unfortunately, she has a somewhat one-track mind. “Soup,” she says. “To place a meaty chicken bone in boiling water to serve an ailing Rebecca—this was a kind of bliss.”

“Bliss is finding someone whose soul is like one’s own,” says Catherine, returned from outdoors, through a hailstorm of her own tears.

“No two souls were more suited than Rebecca’s and mi—Mr. DeWinters’.” Mrs. Danvers brushes off her skirt and offers to refill Catherine’s soup bowl. Later, Cathy complains of stomach pain.

Henry is handsome, well-mannered, and has infinite knowledge of books thanks to his work as a librarian. He’ll talk about Dorothy Sayers and Alice’s Adventures in Wonderland and the book made entirely of skin at the Newberry Library. Depending on when in time you encounter him, he may drink all the liquor you’ve purchased for the party, and perhaps for the next several months, but his conversational skills make this forgivable. Seymour becomes apoplectic with pleasure when Henry recites Rilke in the original German. Cathy is ready to run away with him to the moors, or maybe a Violent Femmes concert. Even Mrs. Danvers has no desire to poison his food or torment him psychologically.

But he time travels, as Henry is wont to do. One minute he’s talking about the punk scene in Chicago, and the next there’s a pile of clothes on his chair. Catherine steals his boxers and tucks them into her purse. Seymour uses Henry’s socks as mittens that double as puppets, which he animates with a variety of voices. Everyone is depressed he’s gone and drunk from trying to keep up with him.

Without warning, Henry reappears naked on Mrs. Danvers’ lap. She screams and pushes him onto the floor. Time travel gives Henry motion sickness, and he promptly vomits up the previous course of the dinner party.

As Santiago Nasar made his way to the party, two men chased him down the street waving knives at his person. Santiago saw nothing unusual about this. He believed them to be swordsmen practicing their sport.

Santiago makes the sign of the cross before eating, so great is his reverence to God. Then he puts his hand on Catherine’s leg and informs her that he intends to tame her by the end of the meal. Catherine grabs her steak knife and Henry, now properly clothed again, threatens to duct tape Santiago to a tree. Outside, under a grove of timber trees, two dark figures prowl around the house, knives in hand.

Earlier that day, Mrs. Danvers had heard a rumor that some kids were going to murder Santiago for taking the virginity of their sister. She says nothing as to not spoil the mood of the party, and also because she thinks he’s scum. Seymour heard the same story but he’s locked himself in the powder room, where he can be heard mumbling about fruit. As the bathroom is off limits, Santiago goes outside to take a leak. Mrs. Danvers locks the door behind him, in order to keep out vagrants. In the garden, the two men catch Santiago Nasar and stab him with pig killing knives. No one at the party notices, as Henry and Seymour have prepared a fresh pitcher of sangria for everyone to share.

Victor apologizes for being an hour and a half late. His asshole boss at the Colonial Times put his best friend Denny in the stocks for being out of period attire, and Victor had to stand there and wipe Denny’s runny nose. After that he stopped at a Sex Addicts Anonymous meeting but only sat through half because he wanted to buy condoms before coming to the party. He thinks he may have tripped on a dead body on his way in, too.

He pulls a chair between Catherine and Mrs. Danvers, neither of whom he can convince to copulate under or on top of the dining room table. This sends Victor into a depression, not unlike the one Catherine experienced earlier. If only guests could coordinate their mood swings.

Victor declares the roast he’s been served delicious, and one thinks he is trying to redeem himself. This thought is barely formed before Victor takes the entirety of the roast, stuffs it into his mouth, and begins to choke. He glances around to see who will save his life and then, in years to come, send him money. More importantly, who will hold him in their arms while he gasps for air and cries? Unfortunately for Victor, Henry is drunk, Catherine would rather let him die than touch him, and Seymour is once again occupied with his sock puppets. Mrs. Danvers has had enough: “Rebecca would never have tolerated such antics!” she screams as she runs into the night.

Victor rams his diaphragm into the table and the roast reemerges.

Everyone says no to dessert. 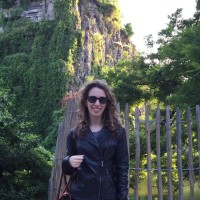