Being Trans Online: Visibility and Imposition

Nothing makes you feel quite as old (at 26, no less) as realizing your students—all university freshmen—don’t recognize a basic aspect of your internet childhood. In this case, it was the idea that pre-search engine, websites had to be manually connected via webrings. And though they laughed at the clip I showed of “classic” internet explainer material, Moms on the Net (which we also mined for gender stereotypes), they protested any characterization of themselves as being “young.” “We’re not that young,” one student huffed indignantly. “Most of us are 18, at least.”

Which means most of them were 2 when Netscape Navigator came out. I, however, was 8. At age 10, I was very proud of my be-GIFed Geocities webpage, constructed entirely in Microsoft FrontPage. I spent much of my middle school and high school years moderating a semi-popular anime message board, now defunct and forgotten.

While I remained unaware of them for many years, drastic changes were simultaneously happening in transgender organizing throughout my childhood. Though access to online spaces remained limited by economic and knowledge barriers for many years, trans* individuals began to connect on BBSes (Bulletin Board Systems), mailing lists, and Usenet groups such as alt.transgendered and soc.support.transgendered. The rise of the webpage as a format made sites such as Lynn Conway’s Transsexual Women’s Successes: Links and Photos possible. Though Conway’s site doesn’t look like much now, it was for many years an invaluable archive that refuted the narrative one couldn’t have a successful life following transition. Many of these lists and sites have been lost to history or, like alt.transgendered, limp along, mostly filled with far-right spam and porn ads.

Now, of course, you can Google “transgender,” “ftm,” or “mtf” if you’re curious. Where individuals may once have had to save scrapbooks of press clippings, scour medical textbooks, or wait for their monthly newsletter or meeting to see others like them, now they could go online to scour trans wiki and forums, watch transition vlogs, and scroll past pages and pages of selfies. Organizations like Bois of Baltimore, blogs like Monica Roberts’ TransGriot, and the #girlslikeus hashtag, to name just a few, provide support for a segment of the trans* population that remains underserved and underrepresented by trans* services and narratives.

As a life-long nerd, it’s not entirely surprising that my professional work ended up being online. As part of my masters’ research, I did a year of “field work” on transition vlogs prior to starting my thesis. In reality this means I spent hours watching vlogs, taking notes, and reading an ungodly amount of depressing Youtube comments. I color-coded pages upon pages of word documents with notes such as “homophobic insult” and “description of sexual attractiveness.” At the same time, I was finally on my way to beginning testosterone, or T. Even though I’d come out to friends three years earlier, I chose not to begin medical transition due to my geographic location–Alabama–and fear of losing my parents’ financial support.*

Prior to being on T, I rarely “passed” as male—coming from a family of folks shaped like squares and wide rectangles meant I was almost always read as a hippy butch lesbian. For those three years, I frequently felt stuck in time. Even if I knew my “future self” existed, every single moment required I reaffirm this fact.

During that period I also participated in a variety of LGBTQ “safe space” trainings for my undergraduate university as a “student panelist.” I now recognize that I was wildly unqualified to be doing this work, but it fit my then-personal identity as a “trans activist.” Mostly, it meant that I was willing to recount my life story before a room full of strangers in the name of “cultural sensitivity” and endure awkward and sometimes invasive questions with a modicum of grace. Because I wasn’t medically transitioning, I often felt it necessary to “prove” I was really trans* to my audience. Which meant reiterating that there definitely was a future me, and I was totally committed to pursuing them like the world’s most dedicated stalker. In these moments, present-Avery ceased to exist. I spoke of what I would do, what medical procedure I would get. In these moments, I could only conceive of myself in future tense: “When I…,” “After I…,” “I will…”. More than my sense of internal discomfort, this inability to change consumed me. If I was not pursuing medical change, I risked being called out as a phony. After all, didn’t I know I was supposed to be something else?

With this future self now so close, I dove in. I read all the blogs, consumed all the information. For a period, the lines between what I read for research and what I consumed for myself blurred. I watched as trans men and women changed. I have a whole playlist of transition progress slideshow videos set to over-the-top empowerment anthems (think Miley Cyrus’s “The Climb.”)  All of these documents, though, were premised on the idea of forward motion, the same concept that inflects the standard trans* “narrative.” If you’ve ever watched a trans* documentary or seen a news report, you‘ve encountered it: I was born in the wrong body, I always knew, now I’m becoming the real me, etc. This narrative serves as the basis for most early published trans memoirs. The vlog also borrows heavily from this format, as users provide semi-regular updates discussing their changes. A person, their camera, and ten minutes to discuss whatever’s on their mind.

Because I used the generic YouTube search during my exploratory research, I scrolled past hundreds of videos, a near-constant stream of faces. I watched of a good portion of these videos, some for a few seconds, some in their entirety. In my repeat watching, I developed a visual narrative of what transition and trans masculinity were supposed to look like: My face would change in these ways, I would lose weight here and gain it there, my voice would sound different by this many months on T. Over time, I became attuned to the visual cues of trans masculinity. Each guy I watched cemented the image: a slim, young-looking white guy with an easy smile, maybe a snapback and a few facial piercings. Trans* visibility became trans* visuality: others’ images defined for me what trans masculinity meant and what being a trans man looked like. Even though many folks I watched had few to none of these characteristics, visuality is tricky like that. It overlays what is seen with what is preemptively expected.

Once I was on T, my body shifted in ways I expected, and others I didn’t. For the first time, I felt a different regret: what did I lose by not transitioning earlier? If only I had known when I was 16, maybe I would look more masculine like that guy. I thought I knew what a trans guy “should” look like, and it wasn’t me. I didn’t look like others, and certain expected changes never materialized. I remained vaguely square-shaped and my wider hips stayed. Instead, I just looked like me plus T.

Over time, I developed distance from what I saw and learned how to be kinder to myself. When the surgeon entered the room during my initial consultation before top surgery late last year, she immediately stopped, held up her hands around my face, and stared. “You have such a masculine face.”

Whatever masculine is, I guess I’m now it. But I’m still not out of the visual loop. Sometimes, when I’m looking at images for my work, I’ll turn to my fiancée and say, “See, I wish my scars looked like his” or “I wish I had been on T at 17, it would have made such a big difference.” The images still converge onto my own, but refuse to fully map on completely.

In some ways, my experience is not exactly the norm. I consumed trans media in far more concentrated doses than most. But it illustrates the influence of visibility on the viewer. Seeing isn’t just an act of looking, it’s also a moment of imposition by both the viewer and the viewed. No one sees another outside of the network of cultural context they’re embedded in. Trans individuals now, by virtue of speaking in “public,” are frequently viewed by others, but trans and cis, as “models,” heroes,” and “experts.” Being trans online means being cognizant that you are always being watched, that your life and words have reach beyond your control, and that you just might be someone’s “inspiration.”

*While I wanted to medically transition, not all trans* folks do! Everyone approaches being trans* differently. 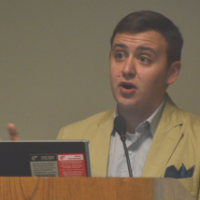 Avery Dame is a Women's Studies graduate student at the University of Maryland, College Park, studying how trans* folk talk online. He occasionally tweets about cocktails, video games, and the hideous menswear on Law & Order.