Caught on Tape: Listening to My Father’s Beatles Music

Kate McKean last wrote for The Toast about the malls of her childhood.

When I was about eight or nine, I spent a lot of time in our finished basement playing Super Mario Bros. My father had a fancy stereo system that I was scared to touch, but I did know how to do one thing: turn on the 7″ reel-to-reel tape player and start the five Beatles albums he’d recorded on the big tapes that looked like filmstrips. I was obsessed with The Beatles, and it was bigger than any fear I had of potentially messing up the stereo and getting in trouble.

My father wasn’t around much when I was young. He was always traveling for work, which was marketing, even though I had no idea what that meant. And then my parents divorced. He moved away, but his stereo and music was in the basement for a long time. I spent a lot of time in the basement, then, too.

When my father passed away, my brother asked if I wanted the tapes, the machine long broken and expensive to repair. I just took this one, of dozens and dozens in a box. I never listened to any others as a kid, and I don’t know if my brother or sister did. There weren’t any other Beatles tapes, though. I’d checked years before.

I spent hours (three hours and eight minutes, to be exact, if I listened to all five albums, start to finish, just once) playing Nintendo by myself. When I hear “A Little Help from My Friends,” I think of world 1-2 in Mario Bros., because it took roughly the length of “Sgt. Pepper’s Lonely Hearts Club Band” to play world 1-1. I still have muscle memory for that game, 25 years later. I still have muscle memory for these songs, regardless of the order I listen to them.

I didn’t recreate this playlist for years after I had the capabilities. It didn’t occur to me. That tape was lost. I’d transferred the complete Beatles catalog to my first iPod hours after I got it, so everything was there, safe. I could listen to it in any order I wanted. Then I got other music, and The Beatles became a different safety net, always there when I was lonely or sad or wanted comfort, but not in heavy rotation. Maybe I was happier than I’d been when I was a little kid. Maybe I was trying to impress boys by knowing Interpol and The Strokes.

When I tried to recreate the playlist from memory, I was surprised it didn’t automatically come to me. Did Rubber Soul come second or third? Wasn’t A Hard Day’s Night on there? But with the tape in my hands, I knew for sure, corroborated by the inserts my father typed sometime in the ’70s (with my addition of “Her Majasty,” [sic] which I couldn’t believe he’d forgotten). After I made adjustments to my draft playlist, because my father only had the 1966 US release of Rubber Soul, and I had the now internationally accepted, expanded UK release (good riddance, “What Goes On”), it was clear. Of course “Run For Your Life” went into “Come Together.” Of course Magical Mystery Tour came after Let it Be. My father made no attempt at chronology. I don’t know why they’re in this order—I never asked. I’m sure it had to do with how long each album is. I’m sure he did the math.

I’m listening to this now. I’ve been listening to it for days. It’s been six years since his death. Sometimes I can forget it, not hear it. Sometimes I’m back in the basement. Sometimes there are comforting baselines and backing vocals and transitions. Sometimes I sing along. But now, it’s here. It always will be, even if my father isn’t. 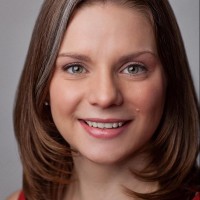 Kate McKean is a literary agent in Brooklyn, NY. She's on Twitter.