So You’ve Decided to Go to Library School

This is the one place in the world where you actually fit in. Sometimes you literally blend in with the crowd, because everyone looks alike. You are constantly getting mistaken for the other million busty, slightly awkward looking brunettes who walk around this area of campus. That doesn’t mean there aren’t cliques, even library school has those. But eventually everyone under 50 who knows how to shower becomes part of the “cool kids” group.

You’re probably wondering at this point how you’re going to fit in. Simple! Have you seen Doctor Who? You should probably have a favorite Doctor (NINE FOREVER.) You’ve read Harry Potter and maybe dabbled in fandom? And you love Tina Fey. You must love Tina Fey. To really stand out you should probably have at least one “thing.” It’ll have to be really weird to stand out in library school though. Maybe cyborg hockey player RPS? Oh wait, that’s taken. Maybe just think on it for a while. Whatever you do, don’t talk about the rock wall at your gym constantly. Nobody likes that guy.

Librarians have to do something with their hands while they’re bingeing on pop culture, so you should probably develop a craft. Knitting and crochet are acceptable, but cross-stitch works too. But what do you eat while you’re watching all that tv? Hopefully you’ve baked some Sorting Hat cupcakes for your Harry Potter marathon. Baking is preferable, but home-brewing is an acceptable substitute. At the very least you should love to eat.

The absolute best thing about library school is your peers. You will all have a Leslie Knope-ian intensity about something. It may be Star Wars, hockey, astrophysics, or that damn rock wall, but everyone brings some kind of obsession to the table. There is sure to be someone who will be a little too into board games. People will regularly discuss Weasleycest and Tami Taylor’s hair at parties, because if there’s one thing librarians get, it’s an enthusiast. We are all punk-ass book jockeys, and we want you to read our favorite book. And then maybe we’ll break down the Library of Congress Subject Headings afterwards.

If you’re thinking you will meet a future love interest in library school, don’t hold your breath. The pickin’s are slim. If you do meet your significant other in library school, be warned: they will ask you to consolidate your Harry Potter collections once you move in together and you will look at them aghast. You will never have any space in your apartment because you need so much bookshelf room. Also, you will probably have cats. So try not to be allergic to them.

Sorry, did you want to actually come to library school to learn, not just to play Settlers of Cataan all night? Well, none of your professors have ever actually been librarians. Maybe one or two tried it in the 70s, but they’re all library directors now. Everyone else has a PhD in Library Science. Nobody has any idea why. PhDs don’t know jack about being an actual librarian.

Oh wait, I lied, you’ll have one awesome professor who had a storied career at a local public library and teaches Young Adult Literature. You take Young Adult Literature even though at this point in the program you know you’d hate being a public librarian, and you still can’t stand teenagers. You thought you’d outgrow that once you stopped being a teenager, but you still can’t relate to youths.

The classes? Oh, they’re great. If you like being treated like a middle-schooler. You will do approximately 10 group projects every semester. Don’t be the person that refuses to adopt the one technological tool that makes doing group projects slightly less monstrous. Google Docs is one of the easiest ways of working on group projects while being a grown-up. If you refuse to use it because you can’t be bothered to sign up for a fucking Gmail account, you are what’s wrong with this country. But group projects are a cleansing fire. If you survive them, you can deal with any library patron with ease. Group projects will teach you how easy it is to get into library school, even a supposedly “well-ranked” one. You will quickly identify the dream-team group member potential for every class and dread pre-assigned groups, despite the ideals of democracy and diversity that library school should have ingrained in you.

Most of what you learn will be in acronyms. ALA. FRBR. RDA. MARC. AACR. ILS. ILL. ERM. IMLS. LCSH. OCLC. OPAC. MDMA…that one may not actually be relevant. But FAFLRT? That one is all real! You are probably going to be forced to take some basic classes before you get into the “advanced” stuff. The basic classes make your brains melt out of your ears, because you spend your time learning a combination of basic html, intricate information seeking-behavior theories, and MATH. You probably came to library school to avoid math, but they don’t care.

Maybe you’re not going to Library School, but to an iSchool? A fancy way of saying, “We know how to use computers too!” And maybe your MLS (Masters of Library Science) is now an MLIS (Masters of Library and Information Science.) Will it make a difference in what you learn? Not really. None of this is helping to make librarians seem more relevant, and that is what worries all the talking heads in every corner of librarianship. They go on as if librarians are going through some kind of extinction event, but our arms are normal sized, so I think we’ll be fine.

So what actually changes after library school? Suddenly that weirdo book-worm vibe you’ve been rocking your whole life is actually kind of cool. People seem to respect you. They may have no idea what you do, and think you wear Tina Fey glasses and lots of sexy pencil skirts with plunging v-necked sweaters (you do, but that is neither here nor there), but they respect you. Maybe it’s all the acronyms?

On the professional side, you’ve now worked and volunteered and interned your way through school, and you’re still not qualified for the entry-level jobs. This may make you bitter about all the time and money you spent on a master’s degree that taught you a little bit of theory and a whole lot of nothing. An apprenticeship probably would have served you better, but then you couldn’t put MLS after your name. And you need that MLS to become a professional…who gets paid $30k a year.

As much as you may complain, library school is like your little brother. You can talk shit about it, but you won’t let anyone else do it. People will enjoy mocking your chosen profession for being a degree in “Googling.” This is why most of your friends are librarians. They will understand the joy of a well constructed Boolean search as the masses cannot. Some of your classmates will eventually get the job they wanted, but within a year they are back at school, starting the PhD program. And they were probably the ones that most complained about the program when they were in it.

Finally, don’t count your cardigans. It’s…let’s just not go there. 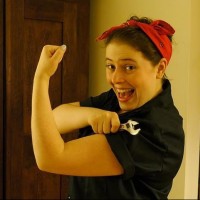 Allison R. is a librarian and archivist, she lives with her cats, countless cardigans, librarian husband and two complete Harry Potter sets. She can throw down on 30 Rock trivia, and her baking skills are legendary.