They say a witch lives over on Elm, right on the corner in an old house that’s sort of fallen down between two towering oak trees. They say her lawn’s green and lush because of deals she’s made with the chattering squirrels that bound along its expanse with no fear of the blackbirds perched on her home’s roof. They say the rhododendron bushes flanking the house’s front steps will laugh and twitch and watch if you try to knock on her door. They say there’s a growling thing in the attic and it’ll leap out to snatch you if you’re walking by late at night.

But they also say she’s got long hair down to her knees and a kind, lined face that reminds them of their grandmothers. They say she’ll weave small charms from bird bones she’s got on hand and hair that you bring her, if you live in fear of shadows underneath your bedroom door (of your parents and their long miles of scotch.) They say she knows strange ways of walking and can keep you from running late when you’ve been told This is the last time, young man.

They say a witch lives over on Elm and Susan is shivering in front of the woman’s house, backlit by the afternoon sun and feeling none the warmer for it. She still sways in place, eyes darting from the black canvas of her shoes to the lengthening shadows on the lawn. They say a witch lives in the house Susan’s been staring at for long minutes (minutes in which a voice in her head keeps asking what are you doing, girl, what are you after,) and she’s chewed her bottom lip bloody with worry.

“Hey, what are you doing?” The voice is outside her head now and Susan screams, sharp and loud, sending a pair of crows wheeling off into the sky from their rooftop vigils. It’s her, it’s the woman they say can still your blood with a harsh bark of laughter and take the hair from your head with a twitch of her lips. It’s the – “Oh, for – hey, calm down.”

Susan stills, if only for fear, and registers the hands on her shoulders. The kind face is staring at her, lines running deep with concern and long, greying hair (God, it goes just past her knees, they weren’t lying, they weren’t,) caught by the wind, turned to shimmering ocean waves. They say this woman’s been alive longer than trees in her yard and Susan believes it, looking at the dark eyes boring into her own.

“Now,” and the witch (that’s what she is, she has to be – they say her voice sounds like drying and dying leaves rustling in the wind and Mother Mary, it does, it does,) “why are you skulking outside my house, kid?”

“I – I, well…” Susan loses her words, spills them down her coat and imagines them shattering on the cracked sidewalk. She’s got pockets full of trinkets, lost scraps of dresses and forgotten rings and pieces of a broken china teacup her mother had screamed over for damn near a month. She’s got the right bits, she’s certain, but the witch is staring at her hard, like Susan’s nothing more than a mosquito flailing in an Autumn breeze – annoying, soon to be forgotten and buried.

The witch frowns, concern quickly changing to consternation, and she lets Susan go. A flash of crashing waves and she’s walking back to her house, muttering about “fucking kids and their stories.”

Susan stumbles forward, mouth full of apology and pleading and they say you helped someone like me, they say you can see past the voice and these damn straight lines. A trio of ravens haunting a feeder wrought from iron and filled with seed watch her movements, wings rustling and stretching as she flings paper plane words that keep crashing short of their target. The witch is still moving, but in slow motion, and there’s a thickness in the air that Susan’s cutting through with every step.

“Wait, please.” Susan is on the front walk now and the ravens caw, somehow sounding confused. The witch stops and turns and looks at Susan through slitted eyes. The waves are wild, tossed by a storm the girl dressed in dark layers brought on the moment she stepped off the sidewalk and onto the lawn. “I, I know –”

“What, exactly,” the witch is staring her down again, two strides and a bent back bringing her an inch or two away from Susan, “do you know, kid? ’cause I doubt it’s enough to explain you standing outside of my house like a frightened rabbit.”

“They – they say you help. They say if I bring enough,” and Susan starts digging through her pockets, holding out the end of a braid and a square of  blood dotted tissue, “that you’ll make things better, safer.”

The witch frowns, looks at the crumpled mess in Susan’s hands and then back up at the ragged edges of hair peaking out from underneath the girl’s beanie (the hat’s as weathered as the brunette locks, rough knit and dark.) The birds are quiet now, watching and waiting while the witch stares at Susan’s face and sees, God in heaven she sees, she knows, doesn’t she?

Susan is hyperventilating when the witch’s frown breaks and a sad smile rains down from the wreckage. “Breathe, girl,” the witch says, looking her in the eyes and kneeling down. “Steady breaths, okay? In and out.”

Street lights are flicking on by the time Susan calms down, sweating through two shirts and a coat, her hands slick from fear. The witch is still kneeling, still murmuring soothing nonsense the roaring in her ears is stopping her from translating into actual words. Susan’s aware that her legs are shaking, that her pulse is still too strong and too fast, but the danger’s been avoided; her thoughts careening away from a pit of shame and selective ignorance and so, so much hiding.

“So,” the witch braces her hands against her knees and pushes up, startling a few lingering birds with the motion, “I can do a lot of things, kid – they say all that shit for a reason, right? There’s a limit, though, no matter how many charms I weave or how well I teach you to hide that shadow on your chin.”

Susan gasps, rocking backwards, hands flying up to cover her mouth and tears collecting fast on her cheeks. It’s been two days since she’d had the strength to stare down the bathroom mirror and ignore the flat plane of her chest and the dark forests stealing away portions of her pale skin. Two long days where she hid in books and only touched long sleeves, stolen leggings.

“But,” the witch is an ocean again, taking Susan by a limp arm and tugging her towards the darkened house in front of them, “I can do enough, and that limit’s not gonna hit itself, is it?”

Susan finds her voice, collects splattered words from the front of her coat and beats them back into shape. The anxiety’s curling back up, tightening and squirming and burning as a tight ball just below her heart. She’s staring a hole through the witch’s hair, trying to keep her voice high and level, “I just want –”

“I know what you want, girl,” the witch laughs, shaking her head and walking without pause. Susan nearly trips, then, but keeps her footing and manages to shake the hand from her arm. The witch turns around and sighs, looking less and less like the hard edged monster the setting sun had cast her as in Susan’s frightened vision. “I know, ’cause I remember what it was like, hiding from my body and going through a half dozen razors in a month.”

Susan tries to say something, though her head is starting to collect a layer of static that’s blocking the world’s signal and providing space for her mother’s You’re just confused, honey, put the skirt down, okay? It’s hard to stand and it’s harder to breathe and it’s impossible to choke out I want to be like you, no matter how desperately the words are pounding against the back of her teeth.

“Hey, hey,” the witch gets close again, puts her hands on Susan’s shoulders while a few cars speed past the house and into the night. “I know what you want, hon. I know what you need, too, but simple tricks only go so far. So keep breathing and come in for some tea, okay?”

“I need to call my – lemme call home.” Susan says after another few minutes of exacting attention paid to her lungs. The witch smiles, nods, and heads for her home while Susan digs through her pockets (past layers of hairbands and a dulled pair of scissors,) trying to find her phone. A lie’s being strung together in her head as she turns around and spots movement across the street; hears hushed, frenzied whispers drift out of hedges.

Her mother picks up the phone and uses the wrong name, but Susan’s still smiling, wondering what they’ll say in a few hours. 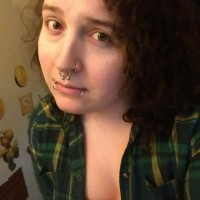