When Bessa is nine her hair turns gray. Well, to be fair, it is more silver than gray. Some blame it on the abnormally high tides, others on the dismal blue crab harvest of that year, but most claim it is the island itself that has turned her hair that vibrant, glinting shade—that it has done so as it slowly slips into the warm, milky waters of the Chesapeake. You see, the island is sinking.

Bessa doesn’t mind the silver. In fact, she quite likes it. At night she brushes her hair ninety-seven strokes (the age to which she hopes to live), then tiptoes out to the dock, getting down on her belly to flip the tips of her hair into the water. There they float, absorbing so entirely the night sky and its reflection in the bay that some say the moon has come down to the earth at the end of Frank’s dock.

Frank is Bessa’s father and an incessant worrier, particularly after his daughter’s hair changes color. He worries about her in the morning over his coffee, at dawn on his deadrise as he motors out to check his crab pots, on Sunday morning at church in the third pew from the front, at night on a lumpy mattress beneath an open window. Gnawing, crafty, all-consuming worry. But he doesn’t say a word, just places a solid cupped hand on the back of Bessa’s head as she hands him his thermos full of black instant coffee each morning.

Bessa doesn’t know, of course. She can’t guess at her father’s delicate nerves. She runs barefoot across the island in faded green dresses and hand-me-down jumpers courtesy of the Carters next door. Through yellow marshes at day’s end, past the sweetbay magnolia trees and their layers of lemony vanilla, she runs hard and fast so the cattails and reeds bruise, bully, bloody her arms and legs. And then, out of breath, she arrives at water’s edge, chest heaving, leg bleeding, lips smiling.

In April, when the water rises to Ada’s front yard (hers is the first house on Main) and doesn’t recede, they know it is only a matter of time. God’s got after us, some say, while others stack rocks and dead branches in front of their porches. As the sea rises, so too do the piles of decrepit wood flimsily guarding their homes against the second coming, rising with the brown, murky tides all around them. When tourists mention climate change, the islanders smile an all-knowing smile, shake their heads, and keep their mouths shut until the last ferry of the day moves out and sets its bow directly into a boiling yellow-red sun.

In June, after school lets out from the one-room schoolhouse, Frank loses yet another first mate to the lure of mainland’s terra ferma. And so he has no choice but to employ his silver-haired daughter.

They rise early in the pre-dawn black, pull on their rubber boots, and fasten their overalls. As they motor out, red light is inching its way to the surface of the horizon and the flat, endless water in the east. Figures remain fuzzy and ghost-like in the half-dark, but Bessa is strong and quick on the boat. She pulls up pots and darts between lines and wires and nets. She uses her skinny wrists to coax on-the-loose blue crabs out of the tiniest of crevices.

But despite her natural ease into this world, Frank still worries. He straps her in a snug life vest and loops a line around her ankle, just in case she falls overboard.

By mid-morning they break, anchoring for fifteen minutes just south of what is left of the long-abandoned Cedar Island, where a community of one hundred and fifty watermen and families once lived (though not a single cedar tree, despite its name). The clamor of Frank’s diesel engine gives way to gull and geese calls, and there they pause, eat cucumber-and-tomato sandwiches on doughy white bread, and imagine (or rather Frank imagines) their own Autumn Island sucked into the sea, just like Cedar.

Perhaps it would go quickly, one house falling over another and then another, crashing into the bay—loudly, suddenly, but then it would be over. All consumed by brackish waters, all save the church’s steeples, rising high and powerful still over the now underwater community. Its docks, its graveyard, its row of black-eyed susans lining the post office fence—all of it now swallowed whole by the water. Or perhaps it would go slow, nearly unnoticeable at first—the crab shacks would seep into the ground, then the water. Gradually the dirt roads on the outskirts of town would become canals. Then the houses themselves would slowly slip away—floorboard by floorboard, beam by beam.

Frank dwells, immersed in these thoughts, but not Bessa. Bessa looks straight up into the sun, then out to the elegant stride of a blue heron. And when the heat gets too much for her, when dribbles of sweat become layers of wet, uncomfortable skin, she unties the line around her ankle, walks to the edge of the boat, and hurls herself into the water with a shout, overalls still on. Frank creates a stepladder for her out of extra line, but he doesn’t end up using it. When Bessa is ready to get out, when her silver hair is soaked through and her burning skin soothed for the time being, Frank reaches over and pulls his daughter out of the bay with one arm scooped around her small back.

Toward summer’s end, the crabs have all but disappeared and Bessa’s hair has grown a deeper, lovelier shade of silver. Her moonlit visits to water’s edge grow longer and more frequent, too. On nights when it is particularly steamy and sleep is coveted but hard to come by, Bessa wades into the bay in her nightgown, leans into the warm waves, and floats on her back. She lets her silver hair down from her ponytail to stream long across the surface of the water, and when she does, minnows and mummichogs playfully dart in and out of her glowing hair.

On nights like these, Frank looks out through his open window above, innately worried at first. But when he sees his dock and Bessa swimming beneath it, he is momentarily soothed by the buzzing cicadas in the trees, the purple wildflowers that overrun his yard below, his daughter so naturally, so easily held up in the water.

In the mornings, as crab pots remain empty, most watermen sleep in and take up odd plumbing or handyman jobs. But Frank and Bessa persist. They continue to rise in the morning, pull on their gear, and cast off the lines. The Friday before Labor Day is unusually gray when they motor east of Autumn Island. It stretches far out in front of them—the gray sky, the gray water. The two blend together so entirely that Bessa thinks for a minute that the world is without end. Here and there, long strips of land and marsh interrupt the gray. So do birds. Lots of birds. Pelicans and seagulls and cormorants and egrets. They fly alongside the deadrise, straight into the wide open.

Frank and Bessa check their pots, no longer expecting to find much, but they pull them up all the same, and stare at the empty cages, strewn with sea grass and bits of barnacle. Then they motor south. Frank goes fast, and Bessa beams, hair in the wind, wind in the face.

At Cedar Island, they sit side by side on the stern, eat their lunch, and sip their Cokes. There are no words between them, but that is not unusual. As they stare out at fast-fading Cedar Island that day, something is all together different. No more thoughts of sinking houses and submerged crab shacks—instead, Frank sees something else. There in the center of what is left of the island—where Frank suspects the highest point of land to be—a loblolly pine stands. It is short, green, and young still, but Frank knows it will grow tall. Maybe it will grow old, too, holding together the crumbling, sinking earth a little while longer.

“See that right there, baby girl? Those trees can live to be three hundred years.”

On the way back in, they check their remaining pots. Bessa leans most of her body over the boat’s edge as she pulls up the last buoy’s line, wrapped in algae and mud. Fist over fist she pulls, but this pot is heavier than the others.

Frank comes over to help, catching the line with his left hand and together they pull the wired cage to the surface. It looks bare at first, like all the others, but then there’s something in the bottom left corner of the cage still submerged in the bay. A blue-and-red claw rises above the surface of the water. And can it be? A little glint of silver in it, too?

Frank delicately lifts out the crab. Holding it up into the gray sky, the silver glint is even more obvious. And he forgets his worry for a moment and places the crab firmly but gently between Bessa’s two hands. It is riled up, stretching and clawing and pinching the air, but Bessa holds firm, waiting for direction from her father.

“That one goes back in.”

She looks up at his stubbled, graying chin while clutching the crab a little while longer. And then with both hands dipped low into the water, she lets go.

You know what will come next. Maybe it’s the even bleaker oyster harvest of that fall and winter. Or the aging ferry dock and its creaking Southern yellow pine planks that collapse into rising waters in a sudden, but expected whoosh one November afternoon. Or maybe it’s the schoolhouse that, after one hundred and sixty years of educating the island’s children, closes its doors in May when attendance dwindles to a mere six.

Whatever it is, the following summer, Frank will sell his deadrise. He’ll pack up his mother’s china and his dead wife’s linens. He’ll attempt to run a comb through Bessa’s hair the day before they move away to the mainland, where the ground is a little more solid and life a little less uncertain.

But on those nights when the moon is round and movie-picture big, when the air is dripping with salt and wet, the few remaining islanders will think they still see her. They will think they see the girl with the silver hair lying on a dock with the tips of her hair draped in the water. Or they will see her at day’s end, out in the yellow meadows, running fast and strong, silver hair streaking long behind her. 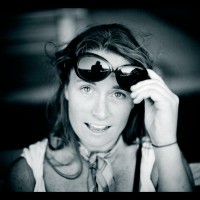 Emmy Nicklin lives in Annapolis by way of New York, Key West, and Virginia. She has written for a number of publications, including Key West Magazine and The Piedmont Virginian Magazine, as well as for various environmental organizations.