An Interview With Alexandra and Natalia of Be Here Nowish

A drug dealer and a dating coach, both somewhat down on their luck, meet in New York and party together before heading to Los Angeles and getting drawn into a world of gurus, tantric sex and hallucinatory spiritual ceremonies. So kicks off Be Here Nowish, a Kickstarter-funded comedy web series by Alexandra Roxo and Natalia Leite. The pair — who have made music videos, commercials and Vice mini-documentaries with their studio Purple Milk — play the lead characters, Sam and Nina, two queer women in their late 20s who set out explore their spiritual and sexual lives. It’s a quest that involves, among other things, drinking one’s own urine and having threesomes in the bathtub.

You can watch the first season of Be Here Nowish, which started appearing this month as part of the Tribeca Film Festival’s N.O.W. program, on the show’s website.

I want to start with the first question that popped into my mind while watching the series: Why give Sam the utterly, utterly thankless job of dating coach?

AR: I have a friend who is a dating coach, and she told me about her job and all these funny stories of people that she went on simulated dates with. It seemed liked a really fun, and also kind of odd, job to have. And as artists or young people in our generation living in New York, a lot of us have worked all kinds of different jobs in order to get by. And sometimes people get really creative about what they’re selling or what they’re marketing themselves as. There are lots of weird odd jobs, and this seemed like a fun one to play with because Sam gets to interact with all these different characters.

Even though it’s kind of absurd, [dating coach] is definitely an optimistic job, while dealing ecstasy to yoga instructors comes off as a little more cynical.

AR: That’s very much a part of our characters.

Definitely. I feel like this represents their attitudes toward everything they get pulled into pretty well. Can you describe the differing perspectives of Sam and Nina?

AR: Like you just said, Sam has a bit of a naïveté and optimism about her. There’s nothing cynical about her. So when she meets Nina, she’s able to be really open-minded. Like, “Yeah, let’s hang out, let’s go out. Why wouldn’t I trust you, why wouldn’t I have faith in you?” Nina is maybe a bit more of a tried-and-true New Yorker, in the sense that she’s going to question things. She’s not going to just jump into a random ceremony. So there’s a nice balance that happens between the two of them, because they influence each other with their different outlooks on the world.

You mentioned in an interview with i-D that much of what happens in the series is based on real life, and that both of you have tried a lot of different spiritual practices. You’ve also written that you want to depict the topic “openly, without judgment or taboo.” To what extent is the series a parody of seeker culture, and how much of it is a tribute? Or is it a little bit of both?

AR: We don’t really like to look at it as a parody. We like to look at it more as having fun with, versus poking fun at, because these things are our lives — things we have experienced or experimented with. For instance, in one of the episodes coming out this week, my character gets a colonic. I just got a call earlier from a woman who owns a clinic in L.A. She was like, “Hey, I wanted to say I love your show so much.” I said, “Sorry, I don’t know who this is.” She said, “It’s your lesbian colon therapist.” That was hilarious to me, but it’s actually true. She’s a lesbian, and she gave me a colonic. And she’s in our show. That’s not a parody, that’s just the life we’re living.

We’re having fun with ourselves. We’re trying to make light of things, and also acknowledge that some of what we do could come off as pretty silly. But we’re never making fun of ourselves because we actually love this stuff.

I can only think of one comedy out there right now with a queer woman as a lead character, and that’s Orange Is the New Black. Except, obviously, Piper Chapman is in prison. You guys have ordinary, non-imprisoned queer female lead characters, but what’s remarkable is that this fact doesn’t define them. It’s incidental. Was this a conscious decision during the writing process?

NL: Yeah. The people that we’re surrounded by, and ourselves — we are queer but it doesn’t mean that we’re wearing it as a badge on our sleeves, or protesting something, or that every day is a pride parade. It’s just a part of life, just like I could be a vegetarian or love cats. There’s obviously a lot of history that comes with that, but it doesn’t define who we are. It’s really important to normalize these things, and normalize them via characters.

We now have TV shows, like Looking, with central gay characters. Even mainstream comedies like Modern Family have gay characters that don’t quite fit into stereotypes. Yet for the most part, television is stuck in a gay-straight binary — it tends to shy away from depicting sexuality as anything close to fluid. Why do you think that is?

AR: I think it’s a lot easier to understand. “Oh, here’s this gay guy and his husband, and they have baby, and they have an eccentric aunt.” Or whatever. These stereotypes are really palatable to people. The gray zone is a little harder to understand, even sometimes for the people living in it. Because sexuality is complicated, relationships are complicated.

We find that it’s important to have characters that aren’t black and white. We’re not trying to have the Shane-from-The L Word stereotype of a sexy lesbian who’s going to hit on the straight girls. My character in the show might have a sexual relationship with a man in Season One, but it’s a very queer sexual relationship. We have a few sexual experiences that don’t really fit into a box, and I consider it to be pretty queer. Those are conscious decisions, for sure, but also decisions that, again, reflect the reality we live in.

A few years back, Patton Oswalt did an interview where he described the differences between comedy shows set in New York versus those set in L.A. Basically, he said that New York-based comedy is raw and unpredictable, while L.A.-based comedy tends to be more tightly controlled. What has your experience been filming in both cities?

AR: We never approached it with something formulaic like that. We just approached it as writers with an artistic style. I don’t think we were ever thinking about having a more New York-y comedy in New York and a more L.A. comedy in L.A.

NL: I come from Brazil, and Alexandra lived in Georgia. We grew up in certain situations. We’ve both been living in New York for a while, but our sense of comedy is more a factor of who we are, what we find funny and how we grew up.

You recruited a well-known sex and dating blogger [Slutever’s Karly Sciortino] to act on the show. What made you bring her aboard?

AR: She’s also a part of our community here in Brooklyn, and she’s a queer writer-artist-blogger-filmmaker. One day Natalia ran into her, and we were looking to cast a short scene. At first it was a one-scene part for her, but then we realized that her character was really fun and that she and Natalia’s character, Nina, had a lot of chemistry. And we developed an arc together for them.

The sex scenes are awkward, but in a very real way. Did you take a conscious approach to filming the sex scenes, or the quasi-sex scenes?

NL: We wanted them to be realistic, but also not too explicit. All of the sex scenes in this season are awkward and funny, but the characters are always getting some sort of pleasure out of it. We thought it was really important to have reflected in the show that the girls enjoy sex and are going after the sex they want, and that they’re never subjecting themselves to experiences that they’re uncomfortable with, that they’re not enjoying.

And it seems like, so far, that their lifestyles aren’t subject to much judgment — the only time it rubs against someone else is if [the sex] is annoying or if they’re in the wrong apartment. It seems like everyone in this world is on board with progressive sexuality.

AR: Totally. The people we surround ourselves with — sometimes it bums us out that on TV, we don’t see any of those people very often. Natalia once said in an interview that it’s amazing that there are all these different types of queers but, bummer, they’re all in prison. We want to show where there’s bunch of random weirdos having different types of sexual experiences.

So, psychedelic drugs in general: Known in certain circles for helping someone grow spiritually, known in other circles as good for partying. I like to think — and I was getting this from the show — that someone can find spiritual fulfillment while still enjoying the kinds of nights that Sam and Nina have when they first arrive in L.A.

AR: A big part of what the show’s about is the fine line between those two things, and the fact that we all battle that when we’re on a spiritual path. We don’t want to go off into some holy retreat vibe every day of our lives, but we also want to be conscious about the choices we’re making. That’s why the show’s called Be Here Nowish, which is a take off the Ram Dass book that really influenced Natalia and I called Be Here Now. Adding that –ish means we’re trying to be private and conscious, but we’re also acknowledging the fact that there’s a balance that has to be had for us to live in this world and also have a spiritual life.

Are there any plans for the Be Here Nowish universe beyond the episodes that already exist?

AR: We’re working really hard to develop a version for television. That would be our ideal, that we would put this on TV and have its life continue.

You also mentioned that this summer, you’re headed to New Mexico to shoot a film of Natalia’s. Can you describe the film?

NL: It’s a feature about a girl who is living in a small town in the desert and becomes romantically involved with this other woman who’s doing drug deals. And the [drug-dealing woman] brings her into this other life and ends up convincing her to get a job at a truck stop strip club. There are also comments on themes of spirituality and sexuality found throughout other projects we’ve done, and it’s going to involve some people in the community we know. It’s not a comedy, though. 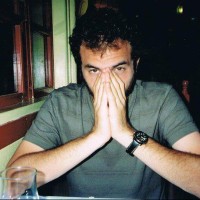 Matt Bevilacqua recently quit his editing job at Next City to try out a life of freelancing in Philadelphia. Tell him what a mistake he's making on Twitter.