Spiderland and the Victorian Child

on May 5, 2014 in Gentleman Scholar Sponsorship

We are, I think, still wrong about the Victorians.

As I write this, it occurs to me that telling The Toast’s readers this is almost preaching to the choir. As a group, you probably don’t need me telling you that the Victorians were not as staid as people presume them to have been. But I think it is, nevertheless, worth pointing out that even as we come around to their more roguish side, some prejudices remain. The popular modern conception of Victorian childhood, in particular, remains fairly one-dimensional. Most of us, even if we should know better, still have a miniature Oliver Twist in the back of our minds; possibly seen spinning a hoop; our Victorian child is Dickensian, wholesome despite hardship, ready to better himself. Or else we picture something sentimental: a drawing room, the Darling children. If we’re British and were sent on school trips to the Victoria and Albert museum, perhaps we think of the old Pear’s soap advertisements with their pink-cheeked, golden-locked (charmingly naughty) infants.

Victorian children are sweet, and always ready to learn. Even queer, biting Oscar Wilde’s children’s stories read as fairly conservative – especially when compared to his other writing.

At least Wilde acknowledged children, though; not so for many of his peers. Decadent writers – the poets and novelists who occupy the darker, more aesthetically-minded end of the Victorian canon – rarely knew what to do with them, finding children obtrusive, primitive and at odds with the civilised adult world. One short story, written by Evelyn Sharp and published in the Decadent outlet par excellence The Yellow Book has a character bemoan children as “worse than dogs”: “You can kick a dog. But it is impossible to kick a child.” In JK Huysmans’ fabulously odd A Rebours, the main character Des Esseintes is fleetingly interested in the futures of children, but cannot “but believe that it had been better for them had their mothers never given birth.” Children cannot be controlled or influenced, cannot partake in life as adults can, and so must be cast aside. There is no possibility, it seems, of reconciling their small, irrational wants with the grown-up world of the decadent aesthete. It’s a stance modern audiences mostly accept wholesale. (Even the fact Wilde wrote for children at all tickles somewhat.) I’m convinced that part of the huge enjoyment to be found today in the work of artists like Edward Gorey is down to the way it unexpectedly marries these two disparate visions of Victorian living: the unsettling darkness of decadence and the wholesome innocence of the nineteenth-century child. All those long spikey lines skewer something that still seems weirdly transgressive, darkly unexpected.

But Gorey’s illustrations, particularly his exquisitely weird Insect God, are not a million miles from those of a book published in 1898. Rose Haig Thomas’ short story collection Spiderland has been critically forgotten even within academic Victorian studies, but its curious interweaving of aesthetic ideals with a fantastical explanation of the natural world might, if recovered, provide a potent challenge to our remaining sentimentalism. Thomas, whose poem “Mars, A Medley” appears in Issue VI of The Yellow Book, was both a decadent poet and an entomologist; before producing Spiderland, she wrote several articles on insects for the then-young (now-massive) scientific journal Nature, on subjects like water beetles and “Protective Mimicry.” Her scientific publications evidence a keen eye for detail; in one December 1895 piece entitled “A Luminous Centipede,” Thomas recounts finding a strange insect in her garden which “showed a remarkable power of control over its luminosity”: “It began to extinguish its light, and in a most peculiar fashion, not dying slowly out all over, but with a rapid wave of darkness sweeping from the tail to the head…”

It’s not surprising, then, that Spiderland’s raison d’être seems at first glance to be teaching science. Dedicated to both Thomas’ son and to “all the Childen I know and shall never know,” Spiderland tempers Thomas’ knowledge of entomology with an anthropomorphism suitable for its young audience. It tells the tales of a cast of insects, flowers and other small creatures as they undergo a variety of natural processes. Different species are given different humorous characteristics: frogs, for instance, are said to have “Heigh Ho!” as a “favourite exclamation” (one can only assume early Hollywood’s use of the Pacific Tree Frog for sound recordings has blinded the world to this fact.) Thomas also, however, imbues her young readers with specific technical details; explaining to them what “tarsi” are and providing the Latin genus of flowers underneath her chapter titles. Many of the stories act as a vehicle to explain scientific processes. “Hymen, The Worker Ant,” for example, focuses on the life-cycle of the wood-ant, with Thomas cheerfully adding that “the true family name was Formica Sanguinea.” Contemporary reviews of Spiderland were impressed by the book’s ability to inform Thomas’ young readers, praising its ability to “teach the little ones to observe nature closely.”

So far, so usual. If providing such details for children seems a little overly technical, there is nothing here that clashes with our image of the self-bettering Victorian youth. But there is another aspect of the collection which the reviewers missed, despite it being far more unusual than her knowledge of insects. If we unpick the threads of Spiderland a little further, it becomes obvious: this book is not only about science, but also spins the hitherto adult concepts of aestheticism into a fabric suitable for Thomas’ young audience. Take, for instance, the character of Mrs.Theridion from ‘The Spider Mother’ as she spins her web:

She was of an artistic temperament, and followed no set lines in making her snare, she only cared for free weaving and hated geometrical spinning.

Each eye that looked on Mrs.Theridion’s snare could read a different meaning in its misty tangle of webs.

As any Victorian studies graduate learns, the subjectivity involved in viewing art – elegantly expressed here in Mrs. Theridion’s intricate web – is a tenant central to much of what is now termed decadent literature; most famously verbalized by Walter Pater in the prologue of his Studies in the History of the Renaissance, which summates in the simple question “What is [a] song or picture … to me?”

Paterian ideas crop up again in the opening of ‘The Vapourer Moth” (subtitled Orgyia Antiqua.) The story opens with “a beautiful caterpillar,” musing idly on its current state:

“Never again shall the verb ‘to eat’ be conjugated: here, here to end one’s days in a long odorous dream of forgetfulness; presently, in case of a shower, to wrap oneself softly up in two or three pink petals and look on the world through their rosy light.”

Thus mused the furred beauty. Pleasure is an eternal day that knows no morrow.

This passage – after which, you’ll be unsurprised to hear, the caterpillar cocoons itself and transforms into a moth – is oddly reminiscent of ideas expressed in Max Nordeau’s Degeneration treatise, in which Decadence is described as a hopeless endeavour, “striving in vain to snatch one more pleasure of sense from the uncertain hour.” This scathing summary of the fin de siècle is in Thomas’ hands, however, made glorious: far from hopeless, our caterpillar revels in the languid sensuality of the moment (the expected rebirth probably doesn’t hurt.) A more positive comparison can be made, again, to Pater, who writes that “we may well catch at any exquisite passion” or “any stirring of the senses, strange dyes, strange flowers.” Thomas’ to-be moth grasps at the senses, the colours and passions, and stretches their fleeting, ephemeral pleasure to an eternity. Orgyia Antiqua is an undoubtedly decadent being.

So what may we take from a book like Spiderland? (Apart from a new knowledge of worker ants and artistic spiders.) Perhaps the most important thing to take away is a sense of its complexity; with its combination of entomology and aesthetics, Spiderland offered Victorian children a way in to both science and decadent thought. It is educative, yes, but it is also enjoyable, and sensual, and — if you’ll allow me to say so — pretty impressively weird. Rose Haig Thomas’ book is a marriage of two oft-divorced visions of the late nineteenth-century: the earnest, hard-working child and the adult, darker aesthete. 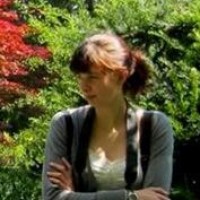 Stephanie is a doctoral candidate in English literature. You can find her at dontdoitmag.co.uk.