Winter had set in, which meant that for a good six months Stacy had constant fantasies of lighting her house on fire and moving to Florida.

One nice thing about winter was that it inspired Les to make his famous omelets. He’d promised her a nice big batch for breakfast tomorrow, and she’d picked up some fresh eggs at the store to make sure she had enough.

She finished putting away the cereal, the cans of soup and the pasta and got the eggs out of the bag. She peeked into the box and, on the sort of happy little whim she engaged in when no one else was looking, she plucked an egg out and sniffed it.

She held the egg perfectly still for a long moment, just to make sure she’d really heard that.

“What are you, a weirdo?” the egg taunted. “Who the hell sniffs eggs?”

“Well you’re some kind of freak, then! Put me back in the box, I don’t want you getting your weirdo fingers on my shell!”

She considered dashing it against the edge of the sink. That would show it.

“Break me and I’ll fuck this house up good,” it warned.

“What if I make you into an omelet?” she asked.

“Fine.” She gingerly replaced the egg into the crate. She thought she heard little snickers from all its little eggy pals as she closed the lid.

A little while later, while Les was busy screeching at college football in the living room, Stacy took some time to paint patterns on old plates. This was her latest craft project; the internet  had assured her that not only was it a wonderful expression of creativity, but that people loved buying this sort of thing for top dollar.

She was just about to add a border of little red hearts to the unicorn one when Les bellowed “Stace! Can you get me a beer?” from across the house. She jumped at the sudden sound, painting a big red streak across the middle of the plate.

She put the plate down, vowing to return and fix it, and trudged back into the kitchen.

“I’d get it myself,” he was explaining from the next room, “But they’re in the red zone and I don’t want to miss the play!”

We have a DVR, you could just pause it, she very nearly said. Instead, she opened the fridge and started hunting around for a beer.

“Well well,” said a nasty little voice from the egg crate. “Look who came back! It’s that fat weirdo from before!”

“I’m not fat,” she said automatically. “I’m just getting a beer.”

“Oh, a beer!” said the egg. Little giggles rose and fell; the other eggs were clearly getting in on the act. “Beer time! But not for you, am I right? You don’t look interesting enough to drink.”

Stacy ignored it and pushed aside the milk, which seemed… heavier… somehow. She filed that fact away. Ah. There, a shiny can that said “LIGHT” on the side of it.

“Husband, right?” the egg continued. “Bet he’s a fat lazy oaf! Though not even three or four beers would make you any prettier, right boys?”

The other eggs howled and guffawed. A few of them said the sort of things that would make Stacy’s old Feminist Literature professor throw things.

Stacy just sighed and shut the refrigerator door. She could still hear the eggs making fun of her in there. She got out a post-it note,  wrote: “Warning: VERY MEAN eggs” on it, and stuck it on the fridge. Les’s feelings were easily hurt, she didn’t know if he could stand up to a dozen little bullies.

The game was up at top volume, and Les was leaning forward in his chair, as if he could somehow make the football faster or better just by leaning at it. She silently handed him the beer; he took it, smiling up at her with that infectious grin she loved.

“Aww, you,” she said, bumping a hip against his chair. Little men scurried around on the screen. Stacy had made it her business, despite a football-mad father and brother, to know nothing at all about the game.

Les cracked open the beer and took a long pull. He hesitated, turned slightly green, and sprayed it in a shiny red arc across the living room carpet. “What the hell is this?” he asked, eyes wide, chugging a bottled water he’d been keeping on hand.

She pointed at the label. “Isn’t it beer?”

“No! Taste it!” He shoved it at her. She took a hesitant sniff.

Was that hot sauce? She took a little sip.

“My tongue feels gross,” he complained. The sound of cheering came from the TV. He threw his hands up in despair. “I missed it! Damn!”

Stacy balled her fists, mission clear. This had gone on long enough.

Jazz replied to her email almost immediately, and demanded both her address and an up-front payment of $50. Half an hour later Stacy heard a terrible racket in the driveway. She glanced out the window; a wiry-looking woman with short, spiky blond hair was getting off a motorcycle.

Who rode motorcycles in this weather?

Jazz pounded on the door; Stacy opened it quickly. “Thanks for coming,” she said.

“Hey!” said Jazz. She was wearing an old sweat suit covered by a leather jacket. She smelled like stale incense and cigarette smoke. “Grocery store girl! I remember you.”

A few months back, Stacy had been confronted by a hairy naked demon in the cereal aisle. She’d been just a moment or two from being consumed or worse when Jazz, with her usual screaming style, had rocketed in and saved the day. When everything was over, she’d cockily presented Stacy with one of her cards:

“You responded quick,” said Stacy, card in hand. “I have your $50.” She passed over a couple of bills.

“All right! Thanks.” Jazz wadded up the cash and crammed it in her coat. “Where’s the problem?”

“Kitchen. The eggs.” Stacy had explained all this in the email. Apparently Jazz didn’t remember much. Somehow Stacy wasn’t surprised.

“Fuckin’ haunted eggs, huh? I’ve seen it before.” Jazz swaggered into the kitchen. “Got any other nasty groceries lyin’ around?”

“Who is that?” called Les from the living room.

“Someone here to look at the fridge!” Stacy shouted back. “Don’t worry about it!”

“Is this about the hot sauce thing?” Les wanted to know.

“They turned his beer into hot sauce,” Stacy explained.

“This is the thing about demonic stuff,” she said when she’d calmed down. “They can be real assholes. You gotta get rid of ’em or they just make everything bad. Hold this.”

She passed a long, wicked-looking knife to Stacy. Where had that come from? Stacy held it gingerly, afraid she might stab herself in the eye.

“Okay you eggs!” hollered Jazz at the top of her lungs. “I’m comin’ to getcha!” She threw open the refrigerator door and leaped back, arms out in front of her like a judo master.

“Is everything all right in there?” called Les.

“Is mee mee mee meeee mee there?” mimicked the egg in a high-pitched voice.

“You all right?” hollered Les.

Jazz closed the fridge. The muffled sound of eggs jeering could still faintly be heard from within. “You got some rotten eggs in there,” she said. “Ha! Rotten eggs! Get it?” She started laughing and snorted a couple of times.

“You try cracking them?”

“And you listened? Girl, lesson number one about demon eggs, never listen to them. They’re full of shit. Hey!” She pounded on the fridge door and opened it again. “Ain’t that right, eggs? You’re full of shit!”

“Fuck off, I’m turning this ham into week-old yogurt,” said the egg. A yogurt-y smell wafted from the fridge. The eggs laughed. Jazz wrinkled her nose and shut the fridge door again.

“I was going to cook that ham!” Stacy said. “I should smash them to bits!”

“Well, hang on,” said Jazz. “Little fuckers sometimes do stuff like inhabit whatever food they’re near if you crack the shells, so let’s be smart. Here.” She pulled out a little tattered book. “Look up ‘eggs’ in there, would you?”

Stacy examined it. The title read in large, red letters:

Okay. She flipped through. Desserts, devil’s food cake (with and without the actual Devil), Dunkin’ Donuts, Easter candy, ah. Eggs.

“What’s it say?” said Jazz. She was emptying her pockets of little vials and setting them haphazardly on the counter.

“That’s the one who talks all the time,” said Jazz. “Right, King Egg!” She smacked a hand on the fridge. There was no response, for once.

“Yeah, I got that,” said Stacy. “Then it says: ‘Perform lockdown spell.’ You know what that is?”

“Sure do, I thought it might be that. I even got the stuff for it.” Jazz grinned. She had a missing front tooth, Stacy noticed, impressed. “Then what?”

“Right, go get a plate you don’t mind getting crap on. I’ll prep the spell.”

Stacy sighed. She knew where she could get such a plate.

“What the hell is this?” the Egg King laughed. “Is that supposed to be a unicorn surrounded by little hearts?”

“This is the worst thing I’ve ever seen!” howled the egg. Its little shell shivered as it laughed. Stacy resisted the temptation to bash it flat. “Who painted this? Was it you?”

“Hey Spike!” the egg gasped. “Do you know this girl actually sniffed me? She took me out and took a big sniff! You believe that?”

Jazz stared at Stacy. “You did?”

The egg laughed even louder. Jazz hid a quick grin.

“Fine,” said Stacy crossly. “Let’s get this over with.”

Jazz spread her arms. “Goddess of nightmares, hear my voice.”

“Bring the demon to a halt,” Jazz said, ignoring it. “Let it stand inert!”

She gestured at Stacy with a little ‘hurry up’ motion. Stacy dumped the powder on the egg.

The lights flickered, then came back on. For once, the egg had stopped talking.

“All right, I’m out. And if you get any more demon food, let me know. I kick demon food’s ass.” Jazz grinned, highlighting that missing tooth, and strutted out.

Stacy glanced at the eggs, and narrowed her eyes.

“This is great!” Les said, poking his omelet. “Usually we do it in the morning, but it’s fun to have an omelet at night! We should do this more often.”

“We really should,” Stacy said, chewing thoroughly. She liked to imagine with every bite that she could hear little eggy screams. “It’s nice to break out of the routine.” 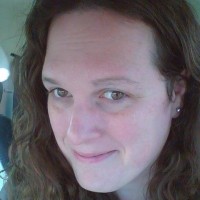 Susan Jane Bigelow is a speculative fiction writer and political columnist from Connecticut. She is good friends with cats and spent some time as a Klingon in the 1990s, among other things.