When I interviewed Patricia Lockwood for the Rumpus, she said of her then-forthcoming book Motherland Fatherland Homelandsexuals, “No one even wants poetry to sound like this, but now it does.” Her thousands of fans would not agree, but certain reviewers, it turns out, would.

Adam Plunkett for the New Yorker’s website and Jonathan Farmer for the Slate Book Review both regard the book in part as a roundabout way of mocking people like them. “Her sexual-political target is all manner of straight-male privilege,” writes the former. “My discomfort with Lockwood’s other poems…might have something do with my advantaged standing as a straight white male,” writes the latter. In fairness, Farmer acknowledges his bias and writes what is ultimately a pretty even-handed review. Plunkett does not.

Sexism is an issue here, as Mallory has already demonstrated. But even beyond that, to view the book as a critique of any system or movement or group of people is to completely misread it. The poems in Homelandsexuals are not essays or jokes or even meditations, but rather fascinating little word-chimeras. They freak out, roll around, howl at the moon, and fall down drunk, but they are not arguments, and they do not critique.

There is, it’s true, a lot of sex in these poems—or, more accurately, a lot of sexual terminology stretched to fit around abstract concepts: “a whitewater rapid with her ass in the air,” or “Walt Whitman nude in the forest, staring deep into a still pool, the only means of taking tit-pics at that time.”

But there’s just as much material that’s equally inventive and artful that has nothing to do with sex, and it deserves to be noticed, because like Lockwood’s first collection, Balloon Pop Outlaw Black, it’s some of the most original, groundbreaking writing being done in the whole country right now.

A poem called “The Arch,” for example, takes St. Louis’s famous Gateway Arch—or rather the concept of it—and uses it to riff about gender, motherhood, childhood, and home, among other things. “A city / cannot travel to another city,” Lockwood writes, “a city cannot visit / any city but itself, and in its sadness it gives / away a great door in the air.” Then she adds in italics: “except for Paris.” These are lines you have to experience without fully understanding. You can imagine a personified city’s despair at its immobility or empathize with its futile, frustrated gesture (and, as always, you can laugh at/envy Paris), but you can’t pin the words to any precise representations or meanings, let alone fit them any sort of political treatise.

Another example of Lockwood’s prowess is “Why Haven’t You Written,” which interrogates the idea of handwritten letters and all the technical systems and hopes and fears that go with them. “The past…obsessively checked the mail,” it begins. “We wore all of our pathways checking / the mail.” By the end, mail has been manically imagined and reimagined as “an avalanche of good news,” a substance that fills women’s clothing, and “a super-stabbed body.” But the poem stays tethered to the ground with understated emotion: “The body of the mail still waits for your knife. / Why haven’t you written. Why don’t you write.”

One of the other things is youth, a theme which figures as heavily as sex. The book bubbles with babies and children and adolescents, all performing impossible abstract feats, of course, and slipping constantly from one incarnation to another. Instead of hitting puberty, a kid in one poem becomes a uniquely fucked-up Animorph (“you seem to be only / a series of places where animal parts could emerge”). A Hatfield and a McCoy in another poem fall in love before their first birthday, “because love comes earlier for people / who live in the past and the mountains.”

There’s one poem about youth that may coincidentally offer some insight into the attitude of reviewers like Plunkett and Farmer. It’s called “There Were No New Colors for Years,” and in it, the neon clothes and stickers of children “made parents uncomfortable and sexually helpless / …they thought / why was I born too late.”

But not everyone is familiar with those surroundings, just like I’m not familiar with building a stoic fence out of snow or whatever they do in Robert Frost poems. Granted, the world Lockwood portrays is a great deal weirder than Frost’s, but I don’t think it actively excludes anyone (though perhaps it seems that way to people who aren’t used to being passively excluded).

What’s weird to me is just how foreign and hostile these reviewers found this book to be. Even the fair-minded Farmer says the poems “make me feel…uncool,” that they’re “meant to” make readers like him “uncomfortable,” readers like him being “straight white males.” But if you asked any of Lockwood’s straight white male peers on Twitter, they would not tell you Homelandsexuals alienates them. They’d say it was accessible, that they recognized their world in it, that they talked that way and thought that way. In fact, that’s what most of her peers on Twitter would say, regardless of race or gender.

Like many great poets before her, Lockwood has captured the everyday language of her world and elevated it to art. The “provocative,” “outrageous,” “edgy” bits are really just repurposed clichés from the absolute bottom of the barrel, phrases that have been typed into Google so many times they’ve been emptied of meaning: “do it standing up,” “‘loving her’ from behind,” “hot young amateur redheads,” “huge jugs.” Lockwood not only finds a way to make these old, stained words surprising, she builds real meaning with them. It’s impossible to really understand that meaning with your brain, but that’s what lets you fumble around in it more fully with your heart.

The poet herself may sum it up best in a line from the collection’s final poem: “This is not something Emily Dickinson would have done. Or is it.” 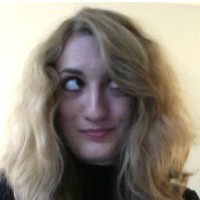 Lauren O’Neal is a freelance writer and editor in San Francisco. Her work has appeared in publications like Slate, the New Inquiry, and LA Review of Books. She is the former assistant editor of The Rumpus and is currently an associate editor at Midnight Breakfast. You can follow her on Twitter at @laureneoneal.