Some: A Poetic Essay

And I, too, have had a barn-load. Of milkers: Penny, Tilley, Frannie, Winnie and Peace; of steers: Calf Tan, Beauregard, and Franklin.

Then I have had, at heart, another herd: Dan, Wyn, Benjamin, David and Lee. And Doug, Nathan, Oscar, Lyle and Al. And Paul. And Jack. And BB. And I thought each one was the One.

Joy, Donald– they each build a poem for their horses, then let them out to roam upon the boneyard of the page. Can they show me what to make of my bevy of ended loves, maybe to bury, at least to confront, my abundance, my herd?

“…it seems to me that a chief impetus [to write] is a need to make use of the guilt and self- contempt. They are like a pair of terribly destructive wild horses who will kick their stalls to pieces and die of self-inflicted wounds unless they are let out gently and broken to harnesses. So you make them plough for you. And they are strong enough to break some awfully stony ground,” Denise Levertov wrote in a letter to Richard Hugo.

In Hall’s poem, his horses were actual horses, vital to life on a farm, providing as much as a cow to the farmer’s subsistence, to survival. My father knows a man old enough to remember when you were judged as upstanding or pitiful based on how straight you ploughed a furrow. I’ve tried this–to handle horse drawn plough, and cut a neat strip of sod. You’d have thought I took my cornflakes with whiskey.

The herd in Hall’s poem are part this husbandry, work done in tandem. He writes:

In April you pulled cartloads of manure to spread on the fields,

dark manure of Holsteins, and knobs of your own clustered with oats.

All summer you mowed the grass in meadow and hayfield…

and after noon’s heat, you pulled a clawed rake through the same acres,

gathering stacks, and dragged the wagon from stack to stack,

and built the hayrack back, up hill to the chaffy barn,

three loads of hay per day, hanging wide from the hayrack….

When I asked my great Aunt Hope how she and Uncle Bill maintained a happy and loving partnership through their years as dairy farmers she replied in the vocabulary of husbandry, she said, “We pulled together,” implying they were harnessed to their marriage like a pair of horses working in a synchronized pace.

In the barn, Uncle Bill used the same mnemonic many farmers use to remember who begat who. When Virginia had her female calf, he named her Verna, and Verna’s female calf was called Violet, and Violet’s calf, Victory, and so on.

But it’s more interesting than that. The names of the herd tell a story, the way a group of stars makes a constellation. Their names mark events and relationships, denote the mood and spirit of the farmer. In John’s barn, Bandit, because of the mask on her face; Mozart because the intern was from Austria; Kosovo because the war was on; in William’s barn Fiona, for a Gaelic music radio host; Meg for the wife of his friend; May for his crazy neighbor; in other words: the names of the herd are a code.

I wanted to marry a good man and have a farm with him.

Along the way I’ve loved men who drive excavators, bucket loaders, skid-steers, one ton dump trucks, back hoes, hydraulic lifts, 40 HP Ford tractors and percherons; loved men who build walls; men who milk cows; men who carpenter; roof; pour concrete and come home covered in it; men who fix cars, and take them apart as well; men who grow food; men who make new rooms, joists to rafters; men who make ganache-like plaster; men who frame; prune; weld. Men whose staccato chopping rivals the woodpecker who rattles us up on Saturday morning; men who bring home fish; men who hunt; men who eschew meat; men who mend the eroded elbows of their shirts; men who need mending, who demand mending, who resist mending; men who fell trees, and men who shore up houses with steel I beams, after work with Guinness and Moby.

Men who break it off.

And men who mend.

I’m versed in the whole narrative arc of it: beginning with a skim of knees under the diner counter, followed by the pretty gifts, the held gaze; the deciding sigh; and then the unremarkable reason love is done. Ended. Over.

But though both men and cattle do their work

And do it well, there are the mischievous geese

And oversize trees, to trouble crops. (The Georgics, Virgil)

Even with all the sweet, there is always something else: the unhealed wounds, the invisible impasse, the herd between us.

Sometimes it was an actual herd of cattle—the dairy farmer’s sixty head always having calves, going off feed, needing an I.V., needed to be fed five times a day; or it was a herd of cars—the mechanic’s fleet of vehicles, parts in the sink, on the table; or a herd of chairs –the antique dealer’s house packed floor to ceiling; or the herd of granite—the stone mason blocked in his quarry. The herds of things anyone keeps to keep a liaison from deepening: my herd of them.

And so my own poem goes:

At the Thai restaurant that used to be a Mc Donald’s, he said, I don’t want a girlfriend, I want a wife.

And another said, I can not be your lover.

And another said, suddenly, almost angrily, How do you think I feel about you?

Another, You’re just not enough.

And I said to another at another time: I’m not wrong and you’re not wrong, we just want different things.

And another one and I were sitting on the couch, and he said, I’m not sure I want to be in a relationship right now, and then he kissed me.

Then another and I were on the same couch, and he asked, How much was your electric bill? and then he kissed me .

And then he said, It’s like trying to put water back in the spout, once you’ve said it, you can’t take it back.

Then I was grading papers and the thought fell into my head: I’m going to marry this man.

But he said, This whole thing was a mistake, as he backed out the room.

And another said, I think we feel differently.

And another called four months later, at 8am and asked, Can I have that peanut noodle recipe?

So maybe he wasn’t the one.

But just to be safe I asked, even though you don’t believe in reincarnation, in case there is—can we get married in the next life?

Yes, he said. But this life’s not over yet.

And so, thinking maybe an algorithm could trump my dumb luck, I signed up for eHarmony and started a new collection:

Until my inbox was stuffed with a hundred new possible life partners, and they began to blur:

Until this was true:

“The word I have translated “flocks” is not nearly so metaphorical: it seems to mean “troops” or “companies” or “groups,” and is used of men and animals equally. The later history of this word seems to suggest that it refers primarily to men. In the fourth simile Homer uses it of flies.”

— Footnotes from an article, “The Art of Homer’s Catalogue of Ships” by John Crosset

and with a fresh-

Pointed to my road   -Issa

The collection is proof: something happened, there was an endeavor, love. Otherwise, I have no other evidence. They are strolling in other pastures: Wyn’s with Deirdre; Nathan lives in the city; Benjamin had a baby girl with his hired hand; BB’s married; Oscar I don’t care, but I think he’s dating the cashier at the Dollar Store; Doug ah yes, let’s ask my ex- best friend Izzy, or as he purrs, Isa-dor-ah, about that one. Lyle: just gone.

I had some men, like Harjo had some horses. And like Hall, all I really have after love’s labors is the litany, the graveyard of names.

And also, I have the roads they showed me.

Just as one taught me how to read stars, wind, and clouds; another helped me to read fields, to lead a calf, to build a fence, and another introduced me to Tennyson, another to Stegner, another the Communist Manifesto, another taught me about collecting things, about how the individual pieces can appear contiguous from a distance, how they constitute a larger story.

I wanted to marry a good man and have a farm with him.

I’ve husbanded the land and loved a herd of good men.

There’s a passage in Willa Cather’s O Pioneers that comforts when I am exasperated, full of fatigue and resignation, feeling that in spite of my barn sized heart, in spite of my mixed herd, there’s no husband.

The passage describes Alexandra, who took over her father’s Nebraska farm and coaxed it to glorious success, and who is now a single middle aged woman.

“…she lay late abed …luxuriously idle, her eyes closed, she used to have the illusion of being lifted up bodily and carried lightly by someone very strong. It was a man, certainly, who carried her, but he was like no man she knew; he was much stronger and swifter, and he carried her easily as if she were a sheaf of wheat.”

Once I approached another heroine, former dairy farmer Gertrude Lepine, who never married or had children, but farmed with her sisters in a Vermont hinterland called, Mud City. I asked if she missed her cows. Her herd was famous, her registered Jerseys attracted buyers from as far away as California when she retired.  Sure there were some favorite cows, she told me, But it’s The Land that I love the most. 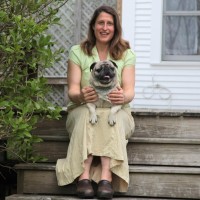 Julia Shipley is an independent writer and a subsistence farmer in Vermont, married to six acres and one man.