We Miss You, Toni and Candace: Bring Back the Feminist Bookstore

Why should this matter? No doubt some of the hundred-odd shops that have closed in the last 20 years were terrible self-parodies: spirit catchers and vagina pillows and an unpleasant fug of oolong and afghans. The survivors’ list doesn’t count the many independent bookshops that love and promote feminist authors but don’t limit their selection to them. Still, though. There is something fundamentally good about a place that exists to stock secondhand de Beauvoir and Virginia Woolf-quote coffee mugs, and something fundamentally sad about its loss.

When I was 13 years old my aunt went to Austin, Texas and brought me back a T-shirt from Book Woman, one of the remaining thirteen. It had a cartoon of a bespectacled woman with crazy Cathy Guisewite hair in a room crammed hoarder-style with books. I don’t remember if there was a cat but there may as well have been.

I loved this shirt. I wore it until the wash made the silkscreen fuzzy. If you cannot already picture the kind of 13-year-old girl I was, then maybe it would help to know that my seventh-grade teacher had the same shirt, and sometimes we wore it on the same day, and when I’d walk into the classroom and see that I was dressed like my 50-something middle school teacher we would give each other a double-thumbs hey! of recognition, and then I would sit at my desk and wonder, very sadly and quietly, why I did not have a boyfriend.

There were many things I did not understand about myself when I was 13, but one of the few things I did know was that reading made me feel happy and safe and present. This shirt, this emissary from some geeky paradise, was evidence that there were other women in the world who felt this way too, enough that physical structures had been built to welcome them and sell them stuff. The knowledge that such places existed, and that one day I would be old enough to drive to them myself, kept me going through an adolescence that often felt awkward and lonely.

The decline of the feminist bookstore tracks with the decline of the bookstore, period, and of other independent retail shops that exist as a gathering place for people who love a very specific kind of thing. The Internet has, thankfully, made it much easier for girls who live miles from any kind of bookstore to find proof that they are not alone, and to find better reading than the bottom-selling authors favored by Portlandia’s Toni and Candace. (Could you put that away, please? Every time you point I see a penis.)

But the thing about the Internet is that you kind of need to know what you’re looking for. Something, anything has to go into that search box to get the journey started. I don’t know if I could have named the feelings that were satisfied by the knowledge that there were places that not only welcomed but celebrated women who lived in their own heads. Bookstores let you wander. The spines and back blurbs and staff picks offer the pleasure of coming across things you didn’t even know you wanted to know about. This is a precious and endangered thing in a tailored-content world.

Also, if someone leaps out of the stacks at a bookstore and shouts that you should be raped or murdered as punishment for having spoken aloud, you get to mace them. This is another way that real life is better for women than the Internet.

After college graduation I drove with a friend from California to our new home in Washington, D.C. We were looking for the freeway in Austin when I spotted a name on a purple strip mall awning and peeled into the parking lot.

It was smaller than I thought it would be. The t-shirts were hanging above the cash register, including my seventh-grade shirt. I did not buy one, because by then I understood that there were ways to find your tribe without having to literally advertise the person you thought you were on your chest. When all else fails, though, it’s not a bad place to start. 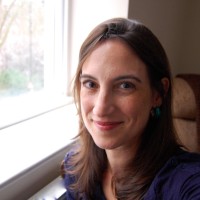 Corinne Purtill is a journalist. She lives in London and tweets at @corinnepurtill.