The Wife of Bath, Misandrist Prophetess

The late Middle Ages was a wonderful time for misandry in literature. Morgan le Fay tried to fuck shit up on many an occasion for her brother Arthur and his Round Table of dudebros; a devout laywoman named Margery Kempe went around graciously forgiving archbishops for being wrong and recorded this for future generations. We would all do well to follow their example. But novice misandrists need look no further than Geoffrey Chaucer’s fourteenth-century Canterbury Tales to find their divine priestess. She is a cloth-maker of some years who has been married five times, outlived every one of her husbands, and has no intention of stopping any time soon (it’s implied, but not said outright, that she is a widow again.) Her name is Alisoun, more famously known as the Wife of Bath, and her voice beckons to us from centuries past and sends men off into their corners to cower in trepidation.

The premise of the Canterbury Tales, for those unfamiliar, is that of a party of pilgrims travelling together to visit the shrine of Thomas Becket; to pass the time, they are to tell each other two tales on the journey there and two on the journey back. Chaucer never got close to finishing four tales for each pilgrim, but the ones he completed vary wildly in tone and subject matter, from traditional verse romances to several bawdy sketches of provincial life known as fabliaux to a beast fable concerning a rooster and a fox. Each tale is accompanied by a Prologue—usually brief—that introduces the pilgrim relating it and establishes some of their personal traits and beliefs. The Wife of Bath’s Prologue, however, is very long, and much more interesting for our purposes than her Tale is.  Without invitation she charges straight into a lengthy homily, bolstered by explicit personal detail, on marriage, gender relations and women’s self-governance.

Alisoun does not cut a particularly erotic or titillating figure when we first meet her—Chaucer describes her as red-faced and gap-toothed—and her joyful, no-details-spared account of her five marriages, her sexual promiscuity and the various creative lengths she went to in order to torment her husbands leaves her primarily male audience aghast (Ed. – GOOD). As one of the most colourful creations by one of the most widely discussed and analysed medieval writers, the wealth of opinion put forward about the Wife of Bath is, obviously, extensive. It’s hard to prove whether she is meant to be realistic or a parody; whether we are supposed to cheer her on or laugh at her as she advocates for her gender and sexuality. I like to think that Chaucer wrote her with fondness, as one writes of an embarrassing but very much loved relative. But how Chaucer actually intended us to receive the Wife of Bath is not something we need care all that much about today, because what we are going to celebrate is how, with a little creative interpretation, Alisoun’s lengthy denunciation of antifeminist discourse from the Middle Ages makes her an ideal candidate for a modern misandrist prophetess.

I will take a step back now and let her speak for herself; we are her unworthy listeners.

Were in this world, is right ynogh for me

Alisoun’s opening lines establish two things: one, that she has so far led a lively and adventurous existence which she now proposes to tell everyone about, and two, that she has been exposed to criticism of her sexual history in the past that she does not intend to take, as it were, lying down. The bulk of the censure directed at her is derived from the writings of a fourth-century monk called Jerome, whose tract on heresy Adversus Jovinianum advocates for a life of chastity and abhors sequential polygamy (and by inference, multiple sexual partners, particularly for women). Alisoun’s response to Jerome and his fans can be translated any number of ways but the abridged version is ‘haha, no, that is stupid as all hell’. “Men may devyne and glosen, up and doun” (26) she says (my emphasis); men can postulate and spin words, and pursue their personal agendas through tenuous interpretations all they like, but she will have none of it. She makes some attempt to cite the Bible in her defence, referring to Solomon and his several hundred wives as a biblical precedent, but her authority is primarily based on the fact that she is a woman and her fruitful life experience thereby trumps old books written by dead white dudes when it comes to what women should and shouldn’t do. Those who “glose” (119)—in other words, fucking Jerome again—would argue erroneously that human genitalia are solely pissing organs.  “The experience woot [knows] wel it is noght so” (124), Alisoun says. She has no problem with anyone pursuing abstinence if they wish, but anyone who tries to impose it on her is going to get schooled. Gaining speed, she then launches into her guide to tormenting men for fun and profit, which goes roughly thus:

1. Marry them.
2. Assume control of their lands and finances.
3. Reap the power that comes with righteous indignation: accuse your husbands of unjustifiably accusing you of deceitfulness, belligerence, and adultery; if they never said anything of the kind, persuade them that they did so in a drunken stupor. “Ye wise wyves, that kan understonde. / Thus shulde ye speke and bere hem wrong on honde,” (225-6) Alisoun intones. Wives, take notes. Given that the only two other women in her travelling party are both nuns, Alisoun is obviously using the word ‘wyves’ loosely.
4. They die (presumably of natural causes, though Alisoun probably wouldn’t be fussed).
5. Identify next victim (this step can take place before step 4).

And have his tribulacion withal

To paraphrase: I will not leave any husband of mine alone, he shall be my debtor and slave, and his flesh will suffer while I remain his wife. Alisoun asserts confidently that this is by the direction of the St. Paul the Apostle, who “bad oure housbondes for to love us weel” (161). One of her fellow pilgrims interjects, horrified, to say that he has changed his mind on marriage and now will never try it; Alisoun tells him to shut up because she hasn’t finished speaking yet. You may all need to add some more milk to your tea now, lest you swoon.

One of the greatest instances is when Alisoun recalls an argument with one of her husbands (the first three especially, it seems, are as interchangeable to her as they are to us) where she asserts since he preaches so often to her of Job’s patience, he should lead by example. One of us has to bow to the other, she tells him solemnly, and since men boast of their superior reason, it thus follows that you are the most able to bear suffering. We don’t hear said husband’s response, from which we can simply assume he was left whimpering and speechless in her presence.

The collaboration of her fellow women is also crucial to Alisoun’s misandrist vision. She calls upon her niece on several occasions as her witness for the prosecution, and disseminates her husbands’ most embarrassing secrets to “another worthy wyf” (536) as well as to her close friend and ally, also called Alisoun (“Alys”), who was the landlady to the fifth Husband of Bath. There is, alas, not enough detail about these friendships to be able to attribute to them any kind of femslash subtext—

Using marriage as warfare is a noble and impressive pursuit, but a little lacking in moments for relaxation. It would therefore be perfectly understandable for Alisoun on occasion to seek companionship and intimacy from an ally, someone with whom she is on an equal footing, and in whose company she need not be constantly vigilant about asserting her dominance. Someone who has her own life and her own means of self-sufficiency, such as graciously accepting money from men who cannot provide a roof over their own heads, and who supports the worthy cause to which Alisoun has devoted her efforts.

I will now paraphrase lines 531-45 with complete accuracy: “Alys was my dearest, closest friend, who knew the intimate secrets of my heart and to whom I confessed more than I did to my parish priest. I visited her often while my husband was away, and we would take leisurely strolls through the fields on beautiful autumn afternoons, for I still love to be gay.”

Chaucer tactfully refrains from giving more detail here; Alisoun deserves privacy sometimes, as does everyone except her husbands.

And whan that I hadde geten unto me,

After a fight between herself and her fifth husband after he refused to stop reading Jerome aloud to her, Alisoun happily relates how he eventually granted her complete sovereignty over their relationship and they lived happily ever after. I prefer to interpret these lines to mean that her husband eventually came to terms with his rightful role in society and realised that the world is in its best state when Alisoun is given free rein to do anything she pleases. The sentimentalists can also draw the conclusion that Alisoun believes the best marriages are derived from mutual respect and reciprocity, if they want to get all schmaltzy about it. Alisoun’s husband stops reading Jerome to her and they burn his book. Ah, true love. 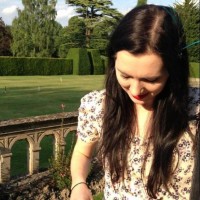 Georgia studied medieval literature as an undergraduate and can't seem to break that habit. She avoids leaving her house unless it is absolutely necessary.