You Can Own Too Many Books

Rachel Kramer Bussel has written about hoarding before.

How many books does a person have to own to officially be labeled a book hoarder? According to Shelfari’s Compulsive Book Hoarders Group, the answer is simple: 1,000 or more. I wish I could honestly answer “there’s no such thing as too many books,” but as I learned from experience, that’s not true. Nothing brought this home for me like watching paid professionals cart away hundreds of books—read and unread, purchased lovingly or attained at book parties or conferences—when I hired a trash removal service last year upon moving from my two-bedroom apartment after 13 years. The most heartbreaking part was seeing anthologies I’d edited, with my name right there on the cover, being swept away into giant garbage cans. This was reinforced when I moved again this year, and was told by the movers, multiple times, that my boxes of books, rather than furniture like a bed and a couch, was what was weighing down their truck.

Books were far and away the most challenging possessions for me to part with. Unopened Talk magazines, dresses I’d forgotten I’d owned, even CDs I’d once coveted, I said goodbye to without much angst. But sending off hundreds of books to their death made me feel like a part of me was dying too. I don’t mean that I’m so far gone I believe my books are alive, but I do believe they are more than simply objects, pieces of paper with print attached inside a pretty cover. If that’s all I thought they were, I don’t think I’d ever have pursued writing so passionately, or cried the first time my words got published in a book.

Even more than I identify as a writer, I identify as a reader. Reading has always been the primary way I make sense of the world around me; books are my first stop when I want to learn about a new hobby, culture, person or world. When I read a memoir, the author’s story lives inside me, making me feel I know them better than I do many of my close friends. While I don’t necessarily need to own a book for it to have any impact on me, being surrounded by books when I wake up and go to sleep puts me at ease—and gives me plenty to choose from should I find myself up at three a.m., as I often do. I’m not a book collector, though, someone who values signed copies the way toy collectors want their treasures in opened, and therefore more valuable, boxes. I believe books are valuable precisely for the words contained inside of them, rather than the packaging binding them. Books are meant to be savored, labored over, argued with, and shared. Amongst the approximately two thousand books I own (give or take several hundred—I’d rather read them than count them), none are rare in any way. I refused to be someone whose prized tomes are wrapped in protective covers, fearful of fingerprints.

My most expensive ones are art and photography books. So the rational side of me knows that most any book I once owned I can procure again, from the library on my new block, or electronically. Even out-of-print books can be ferreted out for a price. But the books I’ve owned, read and pondered carry memories inside their covers. My friend Jessica Cutler’s novel The Washingtonienne, sporting its pink bra and cleavage, reminds me of the days when she was just the star of a scandal to me, rather than someone I hang out with. I look at her novel differently because of that. Even books that have merely sat on a shelf for years have done their job, patiently waiting to be noticed. I don’t want someone else’s copy. Instead, I revert to that most selfish of children’s rants: mine!

Yet I keep wondering what the lost books say about me, what messages I’m sending by prioritizing some books over others. Does my rescuing of Richard Kern’s explicit photo book New York Girls over Matt Logelin’s widower memoir Two Kisses for Maddy mean I’m more interested in sex than death? Not necessarily. I’ve owned the Kern book for over a decade, but can’t say I’ve looked at it more than a handful of times. I probably wouldn’t have remembered I owned it if I hadn’t stumbled across it.

Whereas with Logelin, I’d thought I’d known his story from reading his blog—his wife died 72 hours after giving birth to their only child. But reading the death scene there haunted me; it’s one I’m unlikely to ever forget. It’s one I recalled when I visited my grandmother’s corpse the day she died. A good book stays with you whether you own it or not; its words take up permanent residence in your mind. The rest simply occupy a very temporary space in your temporal lobe, gliding gently by but never settling in and making themselves at home.

My problem, ultimately, aside from what I’m pretty sure would meet the new DSM-V categorization of hoarding disorder (“characterized by the persistent difficulty discarding or parting with possessions, regardless of the value others may attribute to these possessions”), is the almost gluttonous thrill that runs through me when I acquire new books. Holding a stack in my hands makes me want to push aside everything else I’m meant to be doing and devour them. If I could read two at once, I would. I look forward to the release of new books the way I do vacations, sometimes even marking my calendar (I just checked off The Possibilities by Kaui Hart Hemmings, May 13). When I read that Dylan Landis’s novel Rainey Royal will be published in September, the first thing I did was pluck my signed copy of Normal People Don’t Live Like This (an apt title for hoarders), where I first met Rainey. While many of my books are currently living in boxes in my basement, my favorites, like Landis’s, get pride of place so they’re easily accessible.

Books are also stepping stones to other books. I love being able to trace not only where I purchased a book, but what interested me in it in the first place. Though I didn’t make it through all of Katie Roiphe’s In Praise of Messy Lives, her Mad Men essay, which quoted Don Draper quoting Frank O’Hara’s poem “Mayakovsky” led me both to O’Hara and his Russian friend. Then, when I stumbled upon Matthew Dickman’s poetry collection Mayakovsky’s Revolver, the title alone was enough to intrigue me.

Lest you think I’m too awful a person to have let so many books find their way into a New York City dump, I will tell you that I tried to let my books go gently in the months preceding my move. I donated hundreds to bookstores The Strand and Housing Works. Recognizing that it’s highly unlikely I will go into filmmaking, I asked my Facebook friends if anyone wanted indie producer Christine Vachon’s Shooting to Kill, and was more than happy to send it to a film nerd friend. I wish I could have gifted each book as carefully as someone giving up a litter of kittens for adoption, selecting exactly the right match for each gently used paperback.

But just as quickly as I get rid of them, new books find me, and vice versa. I feel it’s my duty as a book lover to buy at least one book from every independent bookstore I visit, and it should be obvious that a bookstore is my first stop in a new town. That’s how I stumbled across Mark Haskell Smith’s hilarious reality TV novel Raw on a table at Portland, Maine’s Longfellow Books. Sometimes the clincher is a phrase or a sentence that lets me know the author is a kindred soul, such as Mary Ruefle’s Madness, Rack and Honey chapter title, “Someone Reading a Book Is a Sign of Order in the World.”

Instead, I have to comfort myself by arranging the books I hauled to the suburbs, shelving them in ways that may only make sense to me. I love the intellectual symmetry of putting Carol Queen’s essay collection Real Live Nude Girl next to Kathleen Rooney’s Live Nude Girl. In my “too sad to read all the way through” category, Elizabeth McCracken’s An Exact Replica of a Figment of My Imagination rests against Emily Rapp’s The Still Point of the Turning World, where I just added a copy of Elizabeth Heineman’s Ghostbelly.

Because I often write about books, at least three, but often double that, arrive in my mailbox every week—though if they didn’t, I would likely make up for that lack in book purchases. Don’t even get me started on book events like next week’s Book Expo America, where free books abound—I skipped it last year for the first time in twelve years, and am actually a little afraid to attend lest I come home with too many new ones.

Much as I love my book collection en masse, perusing all the titles in different fonts and colors, the mix of YA and mystery and memoir and romance, it’s cracking open a first page and getting swept away that will always captivate me. I can’t apologize for loving books too much. If that makes me a book hoarder, I can live with it. 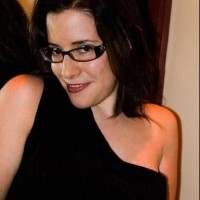