I flipped when I heard Sofia Coppola was chosen from a pool of directors to helm a live-action film of The Little Mermaid. Could there be a more perfect candidate to take on Hans Christian Andersen’s dark tale of teenage lust? After so many lackluster attempts to bring the fractured fairy tale to the box office (Red Riding Hood, Jack the Giant Slayer, Hansel & Gretel), we might finally get an adaptation that’s worth all the excitement (though I’d be remiss to not include the success of this summer’s Maleficent, which some feminists have hailed as a “Disney rape-revenge fantasy.”)

Of course, the princess factor increases the appeal of Coppola’s project tenfold. The most pervasive fairy-tale figures in our culture are princesses—more specifically, Disney princesses, which is readily apparent from a look at most pop culture blogs. You can find pictures of Disney princesses as superheroes, Disney princess magazine covers, Disney princesses fighting zombies, the list goes on. Girlhood is over for so many of us, yet we’re still somehow so fixated on these characters from our youth. Nostalgia is an easy explanation, but for once, I’ll take the Freudian lens on this phenomenon. The older you get, the harder it is to separate the classic princess stories from elements of female sexual development: innocence, lust, blood, punishment.

We are sexual beings, and it’s scaring our parents (Cinderella), making us vulnerable to predators (Little Red Riding Hood), and perhaps even a risk for our voices and souls (The Little Mermaid.) The older we get, the easier it is for us to see the illicit cracks in these stories, and they become even more intriguing as a result. How did we miss the bloody feet in Cinderella, the blatant necrophilia of Snow White and Sleeping Beauty? Does removing the details from these stories make them any less troubling? Why didn’t we leave the stories the way they were and tell them to adults instead, as the Grimm brothers originally intended?

I can’t speak for anyone else, but it’s this sense of being deceived that makes me so intrigued with dark rewrites of fairytales, the ones that restore all the gore and sexuality our parents glossed over. The Little Mermaid is especially ripe for this kind of restoration, as The Atlantic pointed out shortly after the announcement that Coppola would direct an adaptation. I don’t know if you’re all aware of this by now, but The Little Mermaid is a pretty fucked-up story.

Perhaps you know the Hans Christian Andersen original by now: a teenage mermaid falls in love with a sailor after saving his life from a storm. She becomes intrigued by humanity and learns that humans have souls, while mermaids don’t. She decides to visit a sea witch and trade her tongue for a pair of legs, which the sea witch tells her will make her feel like she’s walking on knives. She finds the prince, who is entranced by her good looks and graceful dancing, so she dances for him until her feet bleed. The prince falls in love with another girl who he believes saved his life that night and marries her instead. The mermaid’s sisters inform her that she can be a mermaid again if she murders the prince. Try as she might, she can’t do it, so she kills herself and turns into sea foam. A+ bedtime story, right?

An adaptation of this bleak melodrama deserves to be as strange and disturbing as possible. The Little Mermaid rewrite that sticks with me the most is a graphic novel called Princess Mermaid by another precocious female, Junko Mizuno. Mizuno is known for a macabre psychedelic aesthetic, full of dangerous, but still demurely feminine women. Like most girls, her characters love pop music, fried food, and occasionally eating people.

Princess Mermaid is the final installment in Mizuno’s trilogy of psychedelic, violent, sexed-up fairy tales. Each book is better than the last. The first two, Cinderalla and Hansel & Gretel, are fun and sweetly rebellious, but Princess Mermaid is darker, sexier, and heavier than its airy predecessors. It’s basically Romeo & Juliet, but this time, Juliet is a mermaid sex worker. This concept might sound gimmicky and simplistic, but Princess Mermaid is too gorgeous and unapologetically weird to be weighed down by such trivial concerns. This book has everything: mermaids eating dudes, a cyborg jellyfish performing surgery, hawt mermaid-on-human action, hawt mermaid-on-dragon action, princes who harvest mythical creatures, YOUR TEARS.

It is not just the strangest story in Mizuno’s trilogy: it is the fullest, rife with strong, tragic characters and complex relationships. The most interesting character is Tura, a bloodthirsty, pill addict mermaid whose only pleasure comes from sadistically murdering the members of a family who killed her mother. Tura has no mercy, compassion, or desire beyond gory vengeance.

All the other familiar characters are given more interesting stories: the “prince” becomes a starving black sheep whose cruel brothers force him to eat entrails for sustenance; the sea witch becomes a masculine, sexually predatory dragon. Meanwhile, the mermaids’ lair is not the bright, inviting environment of “Under the Sea”: it’s polluted by a nearby factory, soaked with blood, and full of dark corners. Mizuno’s harsh scenery makes it easy to understand why a teenage girl might want to escape.

The central love story of Princess Mermaid is also not the saccharine affair we knew in our childhoods. Unlike the Disney equivalent, it’s not pure, doe-eyed lust that draws our heroine, Julie, to her human lover, Suekichi. They’re the outcasts of their respective families, bound by their fatigue with the war their siblings won’t stop fighting. Julie wants to rescue Suekichi from his abusive family (because for once, the boy is the passive agent, locked away in a dungeon) and take him somewhere safer. Like proper tragic lovers, their determination to be together is unflappable. And as Sofia Coppola knows very well, the love of a teenage girl is never just a fluffy, innocuous crush: it is nuanced, all consuming, a life-or-death matter.

Princess Mermaid has all the gore and sexual subtext of Hans Christian Andersen’s dark original without any of its misogynistic preachiness. It’s 135 pages of bizarre, stunning illustrations, and I couldn’t think of a better primer—or blueprint—for Coppola’s live-action film of The Little Mermaid. Surely Disney would never let Sofia venture into the kind of psychosexual violence on display in Princess Mermaid, but can’t we dream? Just close your eyes and imagine the majesty of a montage of mermaids eating dudes to Slowdive. I can’t stress how much money I’d pay to see that. Bring it on, Sofia. 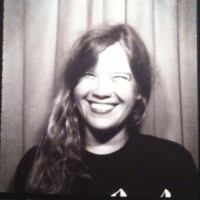 Sarah Fonder is a freelance writer whose work has appeared in Flavorwire and BUST. You can follow her on Twitter.