In May I went to the Book Expo of America at the Javits Convention center to read from my novel. The Amado Women is a story of the lives of four women, who, like me, happen to be Mexican American. I was excited to attend to sign copies of this novel, which represented so many gritos y lagrimas, shrieks and tears. When I got there, I realized the convention center was as huge as Manhattan: dozens of publishers, hundreds of authors, thousands of books. There were banners three stories high reminding me that I was not David Mitchell, that I was not Lena Dunham. I worried there would be no one at the table where I was slotted to sign.

But there were a dozen women waiting for me, thank God. The very first woman was Dominican. She told me she wanted this book for her mother in Dominica, because there were no stories of middle-class Latinas. She, and others, recognized and reminded me of the purpose of my novel. After signing copies I walked around to Consortium’s SpeakFreasy, where people schmoozed and talked. I met a woman representing the foreign rights for a country I forget, and as I told her about my book she said, “But you don’t look Mexican.”

It surprised me. Not because I hadn’t heard it before, but because I hadn’t heard that line in a couple of years. I certainly had heard it enough to know what to say. And because she represented a possible market, I said it with a smile. “This (meaning me) is what Mexican looks like.” That foreign rights woman, with her declaration, also reminded me of the purpose of this book.

Really, you should never tell someone they don’t look like your conception of what they should be. In her mild defense, the media bears some responsibility in our portrayals. The range is incredibly limited, from the hot, sexy, voracious and insatiable Latina, to humble, oppressed and victimized women who haven’t learned how to say “yes” instead of “si.”

I am in no way denigrating humble workers or the integrity of their labor. Nor do I have qualms about young sexy things. The allure of the young and beautiful was precisely why I watched the World Cup.

What I do argue with is the narrowness and predominance of these depictions. None of us are born within that tiny frame, and those of us who live our lives outside of it are invisible in mainstream portrayals. Think I’m exaggerating? Flash to the last movie or TV show or play you watched, or novel you read. Can you find her? If you do, please let me know. Or, more typically, is she absent? That is who I call the Invisible Latina.

Maybe you disagree. Maybe you think “So that’s the movies. You’re a writer.”

Let’s talk then about Chipotle Mexican Grill. Jonathan Safran Foer had this idea that the cups and plates Chipotle uses should have words from authors. Of the ten authors chosen, how many were Mexican American, wait, Latin American, or wait, even encompassing the globe, Hispanic?

Here in Southern California, Latinas are doctors, lawyers, teachers, principals, chiropractors. Name a profession, we’re covered. Is this media invisibility because we’re “new” to this country? Er, many of our ancestors were here before statehood.

A friend and I were driving down a street where a building had just been demolished. “What used to be there?” he asked. It was impossible to conjure up. It struck me that that is what my existence is like, and that of my mother, my sister and my daughter. Invisibility in the media makes it impossible for others to conjure up what we could possibly be doing with our lives, what we could possibly look like. And if we are doing something “unexpected” it is because there is something “exceptional” about us. This is not some strange multigenerational coincidence, this whitewashing of who we and others are is the history of our country.

The head of ABC, Paul Lee, recently came out as being very much in favor of diversifying its lineup. “America doesn’t look like that anymore,” he said, meaning it is no longer all-white.

America has never been all white.

Yes, indeed, at times I am an angry woman of color.

Ethnicity is just one facet of who we are, one piece of the complexity of being human. In The Amado Women I wanted to explore the challenging and emotionally fraught lives of one family. I hope to broaden the mental landscape of people who think that all of our stories are of immigration. I write to shred the cloak of invisibility thrust upon us. Or, as the French director Robert Bresson says, “To make visible that without you will never be seen.” 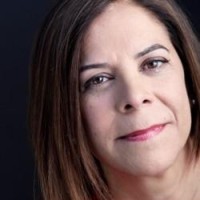 Désirée Zamorano writes in order to shred the cloak of invisibility thrust upon Latinas. Her novel, The Amado Women, from Cinco Puntos Press, will be out Spring 2014. Four women, linked by birth, separated by secrets, struggle to reconnect.