Leigh Brackett might not have worked in Hollywood had she been named Susan. Raised by a household of women and schooled by nuns, in the 1920s no less, it is remarkable how the legendary sci-fi writer would always move with such ease among the realms of men, both real and fictional. Before the age of thirty Brackett had penned a hard-boiled novel that so intrigued filmmaker Howard Hawks he insisted on meeting the man behind the book. Surprised to find Leigh was of the gentler sex, Hawks hired her anyway to write The Big Sleep, alongside William Faulkner. Brackett went on to author several of Hawks’ later films, including Rio Bravo, El Dorado, Rio Lobo, and the truly weird and magnificent Hatari!, as well as Robert Altman’s The Long Goodbye. Her screenplays are lone-hero western and crime vehicles for the likes of Humphrey Bogart and John Wayne, yet when you consider there exists an entire Wikipedia page dedicated to the fantastical Brackett solar system it is clear: Leigh Brackett’s lasting legacy is science fiction. So much so that a young geek named George Lucas, fresh off the first Star Wars, enlisted his favorite author to write Star Wars Episode V: The Empire Strikes Back. Although Brackett delivered an initial draft she passed away only a few weeks later, before production could begin. She remains credited as the screenwriter and earned a posthumous Hugo Award for the film, and indeed all throughout the Star Wars universe one finds traces of the writer’s celebrated imagination.

Springing to life in the pages of pulp science fiction magazines throughout the 1940’s, the “Leigh Brackett solar system” envisions Mars and Venus teeming with life and a moody adventurer named Eric John Stark hurtling alone through outer space, though he may as well be riding a horse into the sunset or driving at night down the rain-slick Sunset Strip. Stark, like Bogart’s private detective Philip Marlowe, or any number of John Wayne cowboys, is the quintessential Brackett loner. For thirty years the writer skillfully tackled fantasy, mystery, crime, western, even post-apocalyptic genres in addition to her reign over science fiction, leaving behind an incredibly diverse body of work that nevertheless maintains the distinct Leigh Brackett sensibility: a characteristic tough-talking romanticism and a reverence for the magic of the cosmos reflected in the potential for greatness in humankind as well as in the power of the individual.

I took my values from the boy’s books I read, that taught the sterling values of self-reliance and good sportsmanship. And I realized, from observation, that no other being, in this uncertain world of death and taxes, can ever be a permanent possession. Your own self is the only person you can be certain of having around. –Leigh Brackett

Brackett was twenty-four in 1939 when she joined the Los Angeles Science Fiction Society and had her first story published a year later (“Martian Quest” for Astounding Science Fiction magazine.) She belonged to a close knit community of pioneering science fiction fans and writers that included Ray Bradbury and Edmond Hamilton – the latter of whom she married (the former of whom serving as best man.) Bradbury remembers meeting Brackett for weekly writer’s meetings at the beach. “I would bring along a new short story (dreadful) and she would let me see one of her Planet novel chapters (beautiful) and I would praise hers and she would kick hell out of me and I’d go home and rewrite my imitation of Leigh Brackett.” Such admiration for Brackett’s talent and influence in the burgeoning science fiction world was common among her well-known male contemporaries, including Edmond Hamilton. He used to joke that Brackett only agreed to his marriage proposal because he had been able to track down and lend her a rare book. Brackett and Hamilton collaborated, supported and inspired one another for thirty years, establishing two strong and entirely separate careers in science fiction writing. Partners in every sense of the word, Edmond died in 1977 and Leigh died the following year.

“We kind of clung to each other, you know. A fellow nut you would think of out there in that outer windy darkness… you kind of cling together because you speak the same language.” –Leigh Brackett

Picture the Mos Eisley Cantina from Star Wars: Episode IV: that smoky dive bar on Tattooine filled with an eclectic mix of interstellar travelers epitomizes the genre known as space opera. Borrowing its name from soap opera, space opera weaves action-packed melodrama into an other-worldly vision of civilizations spread across planets and moons far beyond our own… and Brackett is regarded the queen of space opera. It is fitting then that Star Wars, an epic space opera brought to film, would be the writer’s final achievement. After all, Leigh Brackett spent her own Hollywood career writing everything but the fantastic science fiction she so loved, and for which she is best remembered. In his introduction to her stories for Fantastic Metropolis, acclaimed writer and editor Michael Moorcock insists, “her example and her influence runs clearly through every Earth- or Mars-bound fantasy adventure story I have ever told and through virtually every other fantasy adventure story that has been told since.” Long live the queen.

Quotes are from “An Interview with Leigh Brackett & Edmond Hamilton” from Tangent Online.

Michael Moorcock’s “Queen of the Martian Mysteries: An Appreciation of Leigh Brackett” can be found here. 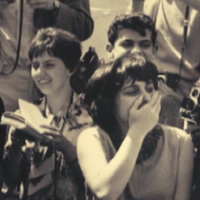 Rose is a comedian in Los Angeles, forever aiming to be livin’ it up.