Seven Vignettes about Working in Retail

A group of college students asked for the student price. I’d previously gotten in trouble for failing to thoroughly check student IDs, so I figured I should follow through. They didn’t have them.

I was on my own and I ordinarily wouldn’t care, but one of the guys annoyed me, so I told them they would have to pay full price.

“Look,” he said pompously, “You can either make $10 at the student price, or nothing. Which is it going to be?”

He looked confused. They left. I might not be a paragon of customer service.

The man and the woman strode to the counter and demanded tickets for the exhibit.

I started to speak. “If you want the coatroom–”

“Thanks,” the man snapped, as he stalked off into the exhibit room.

A minute later, they re-emerged, and asked the gift shop manager where they could hang their coats.

“She didn’t tell us where,” the man said, accusingly.

They divested themselves of their coats and walked back through the gift shop. The man narrowed his eyes and glared at me.

I leaned against the counter and smiled benignly. We maintained eye contact until he was forced to twist his head around rather than watch where he was going. Eventually the woman ushered him inside the door. He broke off first, so I’m pretty sure that means I won.

A man came storming in.

“Do you have outdoor hibiscus?” he demanded.

“DO YOU HAVE OUTDOOR HIBISCUS?”

The car was sitting in the parking lot. It was 10 minutes before closing, and I really didn’t want to deal with people. At first I thought maybe they’d pulled over to read a map. Upon further examination, they were making out in the front seat.

They were teenagers, or maybe he was early 20s. I remembered seeing her around school, but I didn’t know her name.

I told them we sold the last tickets half an hour before closing. They could go in if they really wanted to, but they’d only have 10 minutes and we didn’t give a discount.

The guy started offering me increasing amounts of money, although I’m not sure to what end. I wasn’t easily tempted to stay past closing time, that’s for sure.

At that point, I guess his girlfriend coaxed him away.

They returned a few weeks later.

“So, you decided to come back,” I observed.

His girlfriend nudged him. “No…” she said, with a shy smile. “We have. Remember? That one time?”

Two women and a 2-year-old walked into the toy store. The older woman was the boy’s mother, and the younger was presumably the nanny.

“Can you help me?” the older woman asked. “I get totally overwhelmed by stores like this.”

So I took her around the store, making suggestions for a birthday present for a 4-year-old girl. We must have found something satisfactory, because she turned her attention to her second problem: she was pregnant, and she wanted her son to give his future sibling a present. Her son was interested in a stuffed monkey, so she thought maybe that could become the gift.

Feeling a sense of obligation and dread, I told her that the button eyes on the stuffed animal weren’t considered baby-safe. “But we have a baby-safe monkey with thread eyes right here!” I said, encouraging her back into the infant section.

One of the monkeys was bought, per Fillmore’s confused pointing. Probably the one with the hazardous button eyes, but I can’t remember. Fillmore got a knight figurine. I considered telling her that it was probably too delicate for a toddler, but then I gave up.

The next day I was working at the store’s second location. My back was to the door when I heard her voice.

“Oh,” she giggled, crinkling her nose in amusement. “You were at the other store yesterday. Ha ha.”

Fillmore was clutching the toy knight. Its sword had broken, or something, and she wanted to return it. Not that Fillmore cared; Fillmore was upset he was losing his knight.

“Do you have anything like it that’s better for toddlers?” she asked.

I showed her a set of small wooden figures, complete with royal family and knights. Fillmore seemed interested, but his mother fretted.

They bought that or something else. Fillmore sank to the floor, sobbing.

*Name changed. It was another Presidential surname, though.

The man was visiting friends, and he wanted a gift for their 2-year-old daughter. “Her dad’s a doctor and her mom’s a journalist, so she’s probably really brilliant,” he said. This was a common theme: people hastened to assure me that the child in question was not, by any metric, an average kid. “What do you have for a precocious 4-year-old?” they’d say. The doctor-lawyer combination was the trump card of power parents.

I showed the man the Lego Duplo. “Do girls play with Lego?” he asked.

I showed him some of my favorite picture books. “I just don’t think they’d take the time to read to her,” he said, dubious. That probably wasn’t remotely true, but it still made me desperately sad. “Anyway, she’s probably reading at a college level, or something.”

He bought the books. I pictured him standing, shocked, as his brilliant friends praised their daughter for bladder control.

We had a regular customer, Lilly, who often came in with her nanny. She’d roll into the store in her stroller, and climb out with the demeanor of a miner descending for a day’s work. She would then set about exploring the store with great seriousness of purpose.

When an older woman tried to say hello, Lilly graced her with an affronted scowl, then resumed pushing her miniature shopping cart around the store. The woman laughed and said it was good to be cautious around strangers.

Lilly presumably recognized me as a fellow curmudgeon, because she gradually decided I was an acceptable person. If there weren’t other customers in the store, we’d play with the trains. She even started talking to me, although I think that was more a sign of her increasing age than my likeability.

We had a bucket of noisemakers by the counter. They were just plastic tubes that made a rather irritating sound when tilted, but they were beloved by children of a certain age. Lilly handed me one.

She handed me a second one.

She handed me a third.

She took it back, totally deadpan.

Lilly was a precocious child. 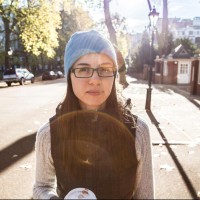