There was a moment in the mid-1960s when the pop charts were practically littered with the bodies of dead boyfriends. They were the victims of car and motorcycle crashes; driven to their deaths by hotheaded impetuousness or social disapproval. The ultimate dead boyfriend song is The Shangri-Las’ 1964 hit “Leader of the Pack.” It opens with gum-smacking girl badasses dishing about their friend and her guy, Jimmy. It ends with motorcycle tires screeching on pavement as Jimmy careens to his untimely demise. Lead singer Mary Weiss gives away this ending when she sings her first line: “I met him at the candy store.” It’s not the words that tell us things will end badly, it’s Weiss’ voice: pitched halfway between singing and crying, she sounds close to hysterics as she delivers the most melodramatic phrase in pop.

Musical melodramas like “Leader of the Pack,” were common enough that music critics developed a shorthand for them: they called them “death discs,” or, even better, “splatter platters.” Musicians of all genders made these records, which were the musical answer to angsty films like Rebel Without a Cause; and boys and girls alike died in them (see: “Dead Man’s Curve,” “Teen Angel,” etc.) Like Lana Del Ray’s contemporary odes to dying young, they were wildly popular (“Leader of the Pack” knocked the Beatles off the top spot of the Billboard Hot 100) but also openly reviled – especially so, when it came to death discs recorded by girls.

On several occasions, Seventeen magazine (hell-bent on shaping its readers into perfect future wives), condemned death discs.  A 1965 editorial made it clear that good Seventeen readers shouldn’t be listening to death discs: “I expect the Johnny Mathis version of ‘Wonderful Wonderful’ to live considerably longer than the Shangri-Las’ gory ditties about motorcycling or hot-rodding death scenes.” That same year, they ran a guest column by none other than Lesley Gore. The “You Don’t Own Me” singer (or, more likely, her publicist,) wrote:

Today, love songs cry out the pain of unrequited love; we hear tales of two young lovers dying, of girls cast aside, and so on… If future historians were to survey our pop market today, they would think our world was filled with despair.

Meanwhile, in a 1965 New York Times article, writer Phyllis Lee Levin tries to stay objective in explaining the popularity of death discs with the teen masses, but reveals her bias by repeatedly calling them “sick songs.” She also writes:

While teenagers twist or moan to the beat of the Beatles, Animals, Zombies, Jerks, Kinks, Larks, Shangri-Las, Beach Boys, Detergents, Four Seasons, Righteous Brothers, and Rolling Stones, their parents are wondering whether they are hearing the sound of music or imitations of the decline of the west.

Here, Levin’s taking a jab both at teenage musical taste, and at the overwrought moral panic that surrounded it. That the Shangri-Las are the only girl band included on her list of luminaries suggests that there was something transgressive about their femininity that warranted their inclusion among the boys.

The Shangri-Las were two sets of sisters from Queens: Mary and Betty Weiss, and Marge and Mary Ann Ganser, and though they weren’t the only girl group to record death discs, they dominated the genre. In some performances, they acted like a tough-talking girl gang, but sometimes they looked and dressed like unremarkable teen girls, walking a line between the exciting and the familiar. Certainly, like many girl groups, the Shangri-Las were a contrivance of the music industry, their image and sound carefully groomed by their producer, George “Shadow” Morton.  But their work as singers and performers was what made the group click with young audiences. Listening to the Shangri-Las’ music let their fans rebel vicariously, while their image showed that girls were complex – never neatly “good” or “bad.” Furthermore, songs like “Leader of the Pack” reframe typical romantic narratives. As Susan Douglas and others have written, it’s the boys in girl group death discs who are objects of desire; and that desire is as much for the kind of freedom and mobility these boys represented, as it is for heterosexual romance.  Maybe a girl wanted a boyfriend like Jimmy; or maybe what she really wanted was Jimmy’s motorcycle.

Given that the majority of 1960s girl group singers were women of color, it’s notable that most of the groups who released death discs were white. Musicologist Jacqueline Warwick argues that the Shangri-Las’ whiteness granted them more flexibility to play with a “bad girl” image than black groups like the Shirelles, or even the Ronettes, whose vampy image represented a different kind of bad girl.  While girl groups of color certainly sang about taboo topics (as in The Shirelles’ “Will You Love Me Tomorrow,” which depicts anxiety over sex) and bad boys (like in The Crystals’ “He’s a Rebel”),  there are few death discs by women of color; and few songs by black girl groups reach “Leader of the Pack’s” melodramatic extremes. The pressure to appear respectable was, and remains, stronger for women of color; for girl group singers, there were personal and professional risks in adopting a bad girl persona.

Death discs are often about class anxiety. In a perceptive piece, Lynn Stuart Parramore argues that Lana Del Ray’s dalliances with death implicitly critique American capitalism; 1960s death discs sometimes offer social critique as well, protesting the rigidity of middle-class gender roles. “Leader of the Pack” stages a conflicts between middle-class white girls, their working-class boyfriends, and outraged parents. Jimmy dies because the girl’s parents force a breakup because he’s “bad,” “bad” implying that he’s from a different social world.  “Condition Red” (1968),  by Memphis-based girl group The Goodees, tells the same story, but in real time instead of past tense, giving it a greater sense of urgency. The Goodees warn: “Mommy and Daddy don’t approve of you and me getting too tight.” When the girl tries to convince her guy to keep seeing her in secret, he drives off enraged; and the unthinkable happens. Sirens blare as our heroine sings: “Condition Red: I’ll never see you again.” The delightfully excessive use of sound effects – sirens, crashes – make the deaths and injustice in these songs seem visceral.

The Shangri-Las’ “Give Us Your Blessings” (1965) departs from the good girl/bad boy narrative. It opens with the sound of a crash (Crashing thunder? Crashing cars? Spoiler: it’s cars), followed by a refrain: “Mary run, run, run; Jimmy run, run, run.” What are Mary and Jimmy on the run from? TYRANNICAL PARENTS, of course; parents who refuse when Mary and Jimmy plead: “Give us your blessings, please don’t make us run away! Give us your blessings, say you’ll be there on our wedding day.” They do run away, and things end badly: “As they drove off, they were crying and nobody knows for sure if that is why they didn’t see the sign that read ‘detour.’” Cue crash.

“Give Us Your Blessings” raises questions about sexuality and respectability. Something about Jimmy and Mary’s relationship disturbs their parents, but it’s unclear what: Is it simply moving too fast? Could Mary be knocked up? Could this be an interracial romance? It’s open to speculation. Whatever it is, when Mary and Jimmy die, mom and dad (and by extension, the social expectations they uphold) are squarely to blame. Death, here, is the ultimate act of rebellion: it lets Mary and Jimmy stay together, in spite of tyrannical forces that would keep them apart.

Not every death disc is so redemptive. In “Terry,” (1964) by British singer Twinkle, Terry dies when he blasts off on his motorbike in a rage, because, Twinkle admits, “We had a quarrel, I was untrue on the night he died.” Later, she bemoans her life choices: “Now it’s too late to tell this boy how great he was. Please wait at the gate of heaven for, me, Terry.” Death sends a different message here: not one about the injustice of middle-class social expectations, but one about the consequences of promiscuity.

The Shangri-Las’ “I Can Never Go Home Anymore,” also veers into warning territory.  It’s the world’s most overwrought cautionary tale: girl meets boy; they fall in love; mom’s not buying it. When the girl inevitably runs away with the boy, her mother just up and dies of a broken heart: “She grew so lonely in the end, angels picked her for a friend.” Don’t run away with a boy – it will kill your mother. I adore this song for the high camp factor, but also because, if you can get past that, and past the conservative teen behavior-policing, here’s a pop song that elevates bonds between women more highly than a heterosexual romance.

By the late 1960s, death disc tropes were so deeply embedded in the public imagination that, in 1967 songwriter Lori Burton masterminded a fake girl group called The Whyte Boots, who released a single single: “Nightmare.” Given that most death discs are already practically parodies of themselves, I can’t decide if “Nightmare” is a parody or a tribute.  After an opening instrumental riff that sounds lifted from a Western gunfight scene, a lurid tale unfolds: a girl gets unwittingly drawn into a fight with another girl (over a guy, natch), that turns into a battle to the death. Cue sirens, and the most mournful refrain you’ve ever heard: “She didn’t want to fight.”

“Nightmare,” parody or no, encapsulates everything that draws me to death discs. It’s their sheer excess: their cinematic sound, their overwrought vocals, and the near absurdity of the stories they tell. They take common experiences – like being a disaffected teenager – and heighten them, transforming them into the most important conflict in the world.  And when they offer warnings, they’re so heavy-handed about it that they make those warnings – and the social hierarchies they would preserve – seem ridiculous. These are anthems for every teenager who never asked to be born. 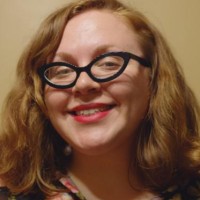 Alexandra Apolloni has a PhD in Musicology, and she researches and writes about the histories of girl pop singers. She is currently a Research Scholar at the UCLA Center for the Study of Women; and is an avid collector of vintage cookbooks.