Going to Movies with Girls

If Alana and I were characters in 10 Things I Hate About You, she would be Kat (Julia Stiles) and I would be Shakespeare Girl (Shakespeare Girl). I always thought myself more literary than her, but she read way better books. Alana smoked pot and went to parties, I drank Slurpees and went to youth group, and together, we drove around listening to the radio or Simon & Garfunkel’s Greatest Hits on cassette. We saw this movie the day before my 17th birthday, and it feels like we should have gone with a bigger group of friends, but I can’t remember anyone else there. I swooned hard when Heath Ledger kissed Julia Stiles in a paintball course to the strains of Semisonic’s “F.N.T.” At 16 years 364 days old, I hadn’t kissed anybody yet. Alana had, but we didn’t talk about it much because I was never good at talking about stuff like kissing, even with my best friend.

It was me, Cassandra, Riley, and this other girl from school, Amanda or Christine or something like that. We all took zero-period dance for P.E., so we all had eighth period free, so we could make it to the Concord theater in time to line up for the afternoon screening. Amanda-or-Christine was the only one who really cared about Star Wars. I went because I was trying to make new friends, and also I was a little bit psychic (one of my mom’s patients gave me a set of Angel cards and said you have the gift) and I knew Jeffrey from the Video Store would be there. He would be there, and we would run into each other, and he would recognize me outside of the video store, and he would talk to me like I was an actual human being instead of some kid working chronologically through Bill Murray’s career on VHS.

It happened just the way I expected: he walked towards us with his friend and saw me with my friends and recognized me and I said “Hi!” and he said “Oh, hey,” all crooked smile and lazy eye.

“How old is that guy?” Christine-or-Amanda asked before he was even out of earshot.

I wished I was with someone I knew better. I wished I was by myself. One time in chorus, I asked Christine-or-Amanada if her thick-soled sneakers were orthopedic shoes. They were not.

On the sidewalk outside of the Shattuck Theater in Berkeley, all the way through the tunnel from our small suburban town, Michelle, Alana and I went around in a circle and said what we liked least about one another. It was an exercise in honesty. Michelle said I made too many jokes, and Alana said I was too stubborn. I told Michelle it hurt my feelings when she acted differently around boys. I am almost positive both Michelle and I told Alana that sometimes she was too depressed, like it was a thing she was doing on purpose and could have worked on if she tried. We felt so mature. The Blair Witch Project scared me a lot, but I laughed through the whole thing. For months after it came out, Michelle, Alana and I would try to scare each other by standing silently in the corner of a room. It almost always worked.

Everybody ignores Muppets in Space like it never happened, and indeed, it is a lesser Muppets film. But Alana and I saw it on a Saturday night the summer before senior year, and we both teared up when Gonzo found out there were other Gonzos in the world and he wasn’t the freak he always thought he was.

Nothing was ever funnier to Alana and me than the housekeeper in this film warning Lili Taylor’s character that nobody would hear her cries for help after dark: The closest people are in town. No one will come any closer than that. In the night. In the dark. It entered our daily repertoire, a sure-fire way to make each other fall apart. Whispering in the murky glow of the underwater light in the deep end of my parents’ pool: in the night, in the dark. Driving home from a concert in the city: in the night, in the dark. Sitting in the driveway waiting for the right song to come on the radio, saying just one more, then I’ll go inside: in the night. In the dark.

I think it was all the youth group girls plus Lisa, who was an honorary member without the waning faith in God. Andria’s favorite movie was Pretty Woman, so we agreed to see the spiritual sequel even though Richard Gere had an old rat face and there were much better movies out that weekend. All I remember is a small country church, Julia Roberts in a wedding dress on a dirt road, and the sense that I was missing something everybody else understood.

Alana swore she saw it coming, but I had no idea.

After the movie, which was not very good, Alana and I argued about which one of us would do time for the other if we were in the same position as Claire Danes and Kate Beckinsale. Alana was an excellent liar when she had to be, and I was honest to a fault, and neither one of us wanted to spend our whole lives in jail although we agreed it would be a great way to lose weight.

One time, Alana and I were driving around just to drive around, and this song started playing on the radio, some kind of futuristic harpsichord, then big, bright piano chords. What is this song? We know this song. Shut up, I’m gonna figure it out. Finally, the lyrics hit “it’s only teenage wasteland” and we screamed, “Ohhh, ‘TEENAGE WASTELAND!’” Then the DJ said “Baba O’Riley” and we laughed at ourselves for having been so, so sure. It’s not like we were never self-aware. Later, we heard the song in American Beauty, and we were so smug to know what it was, and to know what American Beauty was, and to be teenagers at the late showing of American Beauty on a Friday night. For weeks, we repeated the line “you want to have, like, ten thousand of his babies” about any boy we found remotely attractive or otherwise deserving of our sarcasm.

Emily Murphy got so scared she left the theater and sat in the lobby until it was over. Alana and I did not follow her out. I don’t even like horror movies, but I wasn’t about to sit in the lobby with Emily, who ditched me every chance she got. We always ended up stuck together, like Halloween in eighth grade when neither one of us got invited to a party so we decided to go trick-or-treating together in the gated community near my house. I was wearing a rented Mr. Peanut costume made of hard, inflexible plastic, adult-sized so it hung down below my knees. When I tripped and fell on the brick steps of some overlarge cookie-cutter house, I couldn’t get myself up right away, and I remember looking out through the mesh eye holes and seeing Emily standing there, not laughing, not concerned, just staring blankly as I struggled on the ground.

Alana and I stared at the screen as the movie ended and said, “Wait, what?” We joked that the director would come on after the credits to explain.

Maybe we were too young to understand the film, or too immature, or just too busy protecting ourselves from feeling so much of everything all the time. Every movie we saw after this, until graduation and separate colleges and eventually losing touch, we sat through the credits and made the same joke.

Alana and I haven’t spoken in several years. I still sit through the credits sometimes, waiting for someone to lay it all out in terms I can understand.

“Hi. I’m Paul Thomas Anderson. I hope you’re enjoying being an adult. Perhaps you’re still wondering, What the fuck? Allow me to explain.” 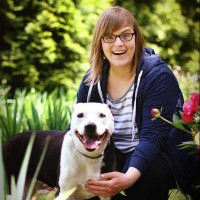 Elisabeth Geier is a writer living in Portland, Oregon.