The Stage Door: On Waiting to See Celebrities

There are a handful of truly historic meetings in the theatre world. When Rodgers met Hammerstein. When Lunt met Fontanne. When legendary American playwright Eugene O’Neill met The Bottle.

On this sure-to-be-historic day in July 2007, I stand outside the Eugene O’Neill Theatre on West 49th Street. I am waiting to meet the original Broadway cast of Spring Awakening, including flawless Delaware cherub (and my future husband), John Gallagher, Jr., and both our lives are about to change forever.

You see, it is extremely important that John-gal-ger-junior (spoken reverently and breathlessly, always) know how big a fan I am. Ever since I saw the screaming but obviously sensitive lad on Good Morning America, I have just had a feeling we’d click. I mean, I am usually too terrified to befriend men and also strangers in general, but this would be different.

Getting signatures from the other cast members puts me on blissful autopilot: make eye contact, pass playbill, pay compliment, give thanks, and move on. I’m starting to feel like an old pro when he finally walks out.

He is literally inches away. I soak in all the details: a Remington Steele t-shirt, red flannel, hair I could easily run my fingers through—

“Focus, Maddie. Should I ask him about Rehoboth? Nah, he probably thinks his own beach is boring. Oh, I could talk to him about his band, Old Springs Pike. No! They broke up recently. Ahh, I hope my hair’s not the mess I think it is. Oh, here he comes—“

“Hiiii,” I drone for an eternity, eyes fluttering from him to ground to sky. “You were so good.”

“Thank you,” he says, as if I’m the only one he’s ever said it to. “Thanks for coming out to see the show.”

“It was great. Could I take a picture with you?”

My mother is armed and ready. I turn myself halfway around, not sure how to pose. I feel him crouch down a little, his right arm resting on the gate and brushing for one fantastic second against my left arm. I am imagining what the picture will look like even before my mother takes it. I know it will be going in my wallet and on my wall and in photo albums of the future.

Nothing in my life is going to top this moment.

Not all fans cling to celebrities so fervently, but it’s easy to understand those of us who do (or did). In the realm of film and theatre, actors are the Front Men. They are the visible package, symbolizing that product we love.

Love of the individual character and/or actor is so visceral that it can even substitute for love of the work as a whole. I have seen countless other Spring Awakening productions, and eventually figured out I didn’t like the show. I just liked that original cast. I reread my old journals about the 2007 production, and I’d actually already recognized this then. Legitimately the nicest things I have to say about it are “[The Tony Award for Best Musical] might have been a little generous,” and “it’s really not as bad as the rep it gets.”

Not that it’s bad to enjoy something just because you like the cast. I do that all the time in the film world. Theatre, however, is another story.

I never thought my “theatre bug” would extend beyond high school drama club and Broadway musicals until I got to college. Content to become the Next Great American Young Adult Novelist, I auditioned for a mainstage Theatre Department show on a total whim. (Oops.) Many productions later, I’m proud to say that I’m pursuing the arts professionally.

But while I have gained a renewed passion for the stage, I’ve also lost my fan perspective. Having been on the other end of things, I know the truth. I know what it’s like to be a tired actor, or a shy writer. I know that it is impossible for my former fiancé, John Gallagher, Jr., to love and remember us all equally. I know that sometimes fans are the last people you need to hear from as an actor. And speaking for myself, from the audience perspective, I know that no one actor can be separated from the whole show.

Which leads me to the absurd and frenzied blob I encountered after seeing Of Mice and Men a couple months ago, starring James Franco and Chris O’Dowd.

It was not by choice. I attended the performance with more celebrity-inclined family members, including my little sister, who was in it to win it with Instagram filters all pre-picked out.

Some in the post-show stage door throng clutched pristine copies of Palo Alto, and almost all clutched smartphones and practiced their selfie shot. There were many false starts as the remaining non-“name” ensemble members darted out from the stage door, quick to find a less shrill sidewalk (as did O’Dowd, I learned later). But finally, the big moment arrived. The erupting squeals were overwhelming, and though I couldn’t see a damn thing, that fever pitch confirmed to me that James Franco was now among us.

“Turn around and have your phones ready,” the beefy, Yankees-capped Franco entourage instructed. “We gotta keep the line moving. He’s not gonna wait for you.”

“Is he even gonna talk to anybody?” I asked no one in particular.

“It’s so nice that he’s doing this,” said one of the aforementioned Palo Alto possessors.

I found it hard to see over the multitude of arms that were reaching back and out over the gate. They were ready. They were so ready.

“I wanna get Leighton Meester next.”

My sister was up front. I handed her my playbill right before her turn. She offered it to him, or probably to the entourage, slowly, trying not to be rude.

“You better hurry up if you want the picture,” said James Goddamn Franco to my little sister while scrawling something indistinct and silver on the page. She hurried the fuck up. Snap. A memory for life, the pinnacle of fan interaction. At least if the sole criterion for that interaction is: Actor showed up.

Some might think the message I’m angling for here is “Look how much more gracious and well-behaved my perfect flawless, but tragically former fiancé John Gallagher, Jr. was,” but they’re only half-right. Pulling back the curtain to glimpse an actor’s true self is always risky. But again, that’s only if communing with the actor is your primary objective. I was disappointed by my Of Mice and Men experience because I paid top-dollar for an average show, not because it turned out that James Franco was underwhelming in person.

And lest you think that I have smugly evolved past any appreciation for actors, fangirly or otherwise, here’s the counterweight. I love Steven Boyer. I love watching Steven Boyer act so much that I plan whole weekend visits to New York around seeing him perform. I love telling people about Steven Boyer so much that I pause The Wolf Of Wall Street during the scene when he shows up as an extra to explain that these five seconds of screen time don’t do him justice. You most likely don’t know who Steven Boyer is unless you are interested in NYC theatre, but rest assured, Dear Reader, I love him enough for the both of us.

So I feel perfectly comfortable telling you that even Steven Boyer’s considerable talents can’t save a show I otherwise find lacking, or persuade me to go see a show I have middling to no interest in. I’ve become a fan because he is so often paired with amazing material, but I still know my own taste. I’m not going to follow him to every Shakespeare production under the sun, and I’m certainly not going to attend a production with casting I consider racially tone-deaf just because he happens to be in it.

But I would go watch him play a chimpanzee, and in fact I did. Which leads me to my last and most rewarding fan encounter.

It is March 2013, the eve of my final spring break in college. A few of my close friends and our mutual mentor have attended a brilliant play loosely based on the chimpanzee that mauled a Connecticut woman in early 2009. One Mr. Steven Boyer is the lead. The four of us giddily stumble out into the East Village, thirsting for a bar.

“Where did the producers say the cast was gonna be?”

“You wanna go there?”

I’m reluctant, due more to my own shyness than any lofty “let’s not bother them” motivation. After all, we had been invited to come hang out after the show.

We order a pitcher of Stella and lord over a booth. We hope our mentor will come out to hang with the kids. We (I) also hope he can introduce us to his good friend Steve. And we hope it happens before any of us gets properly sloshed.

Sloshed is definitely the state I am in when Steven Boyer stops by our table. I deliver my same unremarkable, “Hiiiii, you were so good,” with less enunciation than usual. I learn that he recently became engaged to a woman in my mentor’s playwriting group. I ask him how many videos he watched to get into the role of Trevor the chimp—the answer is: a lot. I think we try to engage him in a Tarot reading; he declines.

The interaction isn’t long. I don’t even tell him my name. But it’s organic, and genuine, in a way the stage door line will never be. The stage door line is a place to see your idols—a place to idolize. But now I’m trying to be interested in people. It’s why I go to the theatre. And it’s why, if I ever meet another celebrity, it will be somewhere I can treat them as a person. 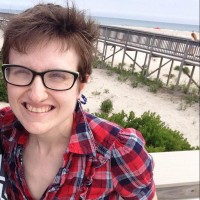 Maddie Gaw is a transient theatre maker currently residing in Ohio. She indulges her fangirly nature by tweeting at well-known playwrights, but mostly she tweets about Animorphs.