Scary Stories to Tell Dads in the Dark

Jessie Guy-Ryan’s previous work for The Toast can be found here.

It was snowing. They told him when he took the gig–taking care of the resort during the winter season–that it’d be a lot of snow. A hell of a lot of snow. “I don’t mind,” he chuckled, “Don’t gotta mow the lawn at least!”

Shoveling the front walk was a bitch, though. At least it just had to be cleared for him and the girls to get to the SnowCat and back.

He stamped his boots on the mat in the front hallway, carefully propping the shovel up against the corner where Sally had laid down the tarp. Tossing his gloves and boots in the corner, he pulled his phone out and texted Sally the coffee emoji. Jen had taught him that recently. Before hitting “send,” he paused and added a blue heart.

Hopeful that coffee was on its way, he made his way to the area of the front lobby they’d taken to using as a makeshift living room. He heard the fire roaring and Jen and Kelly’s giggles above it. He entered the room, and noticed the two girls cuddled up in an armchair–his armchair, the comfiest armchair, the one he always sat in–engrossed in the iPad.

“Now, what are you two troublemakers doing over there, sittin’ in your dad’s chair?”

The giggling stopped. The iPad, too, seemed to stop, a frozen reflection of red and blue and green glows on his daughters’ faces. After a moment that might have been a temporary stoppage of spacetime, they stared up at him blankly.

Their voices had the howling winter wind deep within them as they tonelessly recited in perfect monotonous harmony, “This is our chair.”

“We have always sat in this chair.”

“We will always sit in this chair.”

The nagging sensation that something was different started in the shower. Heading downstairs, Bob cut through the kitchen to the living room and grabbed the remote. “Bob,” Mary’s voice called from behind him, “Come on, no TV during breakfast. It’s Sunday.”

“I just…I had a feeling something was up.”

“Well, it’ll still be up after church.”

Bob ruffled his son Patrick’s hair and plopped down beside him at the kitchen table. Mary had a point, as always.

But church only aroused Bob’s suspicions further. Pastor John seemed distracted, drifting off during the sermon. Peter, usually ready with an enthusiastic handshake and predictions for the day’s football games during the exchange of greetings, had a stretched grin that appeared to be glued on. Bob could practically hear Mark’s teeth grinding six pews back.

As he looked around, Bob noticed all of the dads seemed tense. Maybe that running back, the one that was on a hot streak, got injured and couldn’t play today’s game. Guys might’ve had money on that game.

Bob thought he’d reassured himself, but he found himself trotting out to the car after the service, cranking the engine, and turning on the radio. The hourly news brief was just winding down, and all seemed normal.

“Well that’s the news for the hour,” the DJ wrapped up, “Gonna be a great game on a beautiful Sunday, so let’s enjoy some of those great tunes we all remember,”

The instantly familiar intro to “Layla” began playing. Bob sighed, relieved. Mary gave him a look and chuckled softly. He shifted the car into reverse. Patrick waved out the window at one of his school friends.

It hit him. That feeling, all day, the strained faces of the men at church…it all made sense, suddenly and horribly. He felt nauseated, like the fundamental physics of the world had changed and he would never regain a feeling of equilibrium. He pulled up the emergency brake, opened the car door, and retched. Vaguely he sensed other men doing the same, a soft backing track of “Layla” wafting from rolled-down car windows.

Eric Clapton is not the greatest guitar player in history.

A flash of lightning across my eyelids careens me into consciousness. No alarm clock glow. The power’s out. A tree outside groans dangerously; fucking storm.

“I’m coming, sweetie,” I swing my legs over the side of the bed and bang my knee on the nightstand, of fucking course. I get to the door and I think I see her silhouette at the end of the hall, outside her bedroom door. I stumble towards her but she suddenly turns left, like she’s going downstairs. “Where are you going?” I call after her, “Be careful, power’s out.”

“Just head to the kitchen, hon, I’ll get you a snack.” Milk might go bad anyway, a bowl of cereal might get her back to sleep.

I take the stairs slowly, the dog’s always leaving bones and toys and the last thing I need is to take a spill in the middle of a near-hurricane, with god knows how many lines down around town.

Her voice is definitely different. Not a little girl’s voice. More confident…older. Like her mom, but her mom’s out of town. She’s just scared, storms always freaked her out. Even when she was real little, any time it rained she’d keep us up half the night.

I take the last few steps two at a time and quicken my pace into the kitchen. It’s real dark. Darker than it should be. I see her in front of me, I think, a vague outline of my little girl. But she’s…different.

Her face is centimeters away from mine. I recognize her but I don’t.

“Your little girl is growing up.” 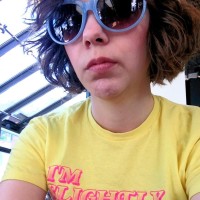