Emails Where Shit Got Real

Author’s note: I wrote this to you a few months ago now. Some things have changed! Others have not. You told me then I should publish it and I came very near to doing it and it did not work out. Even now I am a bit unsure but I’m going to trust you on it.

I have spent most of the summer in the middle of a nervous breakdown, which was improbably brought on by a series of events in my life which to anyone else must look like success.

Things started going wrong at the same time they started going right. I sold a book. I suddenly had a second career not just in theory but in fact. And all at once, overnight, the bottom fell out of my mind. I would go around my ordinary life, which still felt rather new to me, and people would congratulate me, and compliment me. And inside I really thought that they had to be either kidding me or lying. All the work of parties became deflection, about how to suddenly concentrate on shifting a glass from my right hand to my left, to look someone in the eye without actually listening, to calm my heart so that I would stop having to wipe sweat from my temple. I stopped going to parties, even to drinks, because of the sweat, actually. I worry that it is a dead giveaway. The last thing I want is for people to see that I know what they’re thinking, that I’m a mess. Having them name the thing that is bothering me would, somehow, make it worse.

I was not an early bloomer. It took me too long to figure out for myself that I had something to say. I was a good kid and a good student and what I knew, primarily, was praise. How to find it, how to get it, how to do it without committing any kind of error. You can’t be a writer like that. Not even oh-god-doesn’t-everyone-love-her Zadie Smith is a writer like that. There are mistakes of form and mistakes of content to be made in building a body of work. And for most of my life, I was unwilling to make a single one of them.

I had the idea that the first thing I published would have to be a perfect piece of work. It would have to have a form and soul so powerful everyone just had to listen to it. For most of my twenties I thought coming to it was a matter of waiting until the perfect pearl formed in my mind. Eventually there would be enough layers on it and the thing would just demand to be expelled into the world. But of course it didn’t turn out like that. Instead, after I hit A Certain Age, and realized that I could not keep waiting for life to come to me, I just started publishing work because it felt like time was running out on something. Now I think, what it was running out on was my giving up on myself. I was very lucky because my writing got picked up quickly, I had the most wonderful first editor I could hope for, other editors picked me up, and before I knew it I could no longer shrug about Being A Writer, I was one.

And I was/am miserable.

I think I’m obsessed with the lives of writers because I’m still in student mode. I want yardsticks, measurements. Lately what I chiefly want to know is how they managed to psychologically survive putting their work out for other people to read. The answer, I have found, through reading many biographies and letters and miscellaneous dispaches from the interior, is that by and large they didn’t. By and large reader reactions drove them mad.

The writers who were luckiest were the ones who eventually ended up locked away from people. For some of them, say Flannery O’Connor, it was the physical circumstance that kept them away. For others, say your Susan Sontags, early meteoric success let them build a psychological fortress which somehow made the whole thing compartmentalized. It let you know that you had a squad of sorts that you were writing for.

It used to be easier to stay up in your castle tower in that way. In general, in order to make their paltry livings, writers prior to this era did not publish every day. There are exceptions to that, mostly the ones who had day jobs as journalists, but among the greats they are few. Most people worked on slower schedules, with editors correcting their efforts and also with what I imagine must have been the very soothing thought that worst comes to worst, a bad piece would end up in the dustbin at the end of the workday and it was only with great difficulty that anyone could ever find it again.

This is no longer the way of things.

It depends where you’re writing, what you’re doing, of course. But if you want to make a living as a writer these days, you must produce at volume. You have to write at a pace which is against all self-editing, careful sentences, complex thought, everything short of an immediate reaction. And you have to do it all the while knowing that even if your work is instantly forgotten — and it usually is — someone can and will dig it up later to throw it in your face.

Not too long ago I had a detractor (male) point to something I’d written on my Tumblr three years ago as evidence of why no one should listen to me now. When he did this I was, indeed, embarrassed at the thing I’d dashed off, not wanting it to be the eternal evidence of who I was as a thinker and writer. But then I knew what I’d say to myself about it: he wasn’t playing outside of bounds, there was no foul, this is the internet, deal with it, try to be the personal embodiment of noregretschicken dot gif.

Which some days I can play quite well, as a role. But it’s not who I am.

Instead, I take the criticisms of others and turn them over in my mind. I possibly take that to an insane degree. I have persuaded myself there is a kind of honor in it. I do half-believe that. When I see others fuck up, and then defend themselves without giving a millimeter to the critics, I cringe on their behalf. I do not buy that the only way to write is with a self-confidence that borders on delusion. When editors tell you you have to “own your writing,” when they insist that your “I” should come across as the only thing that matters on the page, I do not think they mean this in a glib, self-help sense. I do not think they mean that you should simply believe that what you have to say is worth saying. I think interrogating yourself will actually lead to a stronger “I.” There’s a good half of true confidence, I think, that is really self-awareness.

But the other half is not to let that self-awareness destroy you.

Here is where I am with writing at the moment: it feels like I am trying to soak the last bits of moisture in a well up with a disintegrating washcloth. Where once putting down the words was like bailing myself out of the rising groundwater, now it’s all reaching and struggle and hard work.

And most days I cannot help but notice that no one wants to drink what little I’ve managed to collect, anyway. I think the struggle to pump it out is making it brackish. I do not blame anyone but myself for that, believe me. I spend hours staring at work wondering how I can make it better so that it will meet some kind of thirst people have. But the longer I do that, the more the well dries, and the harder it is to get the next bit from it. I just have to keep giving up, and going back. And in the meantime I feel like a fool and a hack who no one reads. The vicious cycle has become, at this point, more of a gear in the machine, something unbreakable, something that interlocks with something else, and something that could not fit in anywhere else.

The only thing I can write with ease is something like this, writing about writing, because “writing” is all I think about. Chiefly, I keep wondering how it is that I am a “writer” when it feels like what I do isn’t so much writing as scraping by on typed words. I know what people think of bloggers. Hell, I know what I think of them myself. I think: you know, what I got into this for was the meaning of words, being able to look into interesting things, tossing them out at the world and watching them boomerang back with full-throated reactions. Instead what I got was sitting around, feeling frustrated and jealous, never feeling like I could say the thing I wanted to say. And having nowhere to hide from myself. 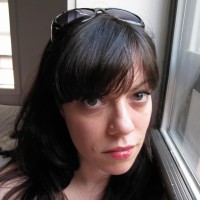 Michelle Dean is at work on a book called Sharp: The Women Who Made An Art of Having An Opinion.