I said something racist once.

Probably more than once. Once that I know of. Once that I think of all the time. Once in a way that the words were barely out of my mouth and I realized I had said something foolish, meaning to make a joke, succeeding only in persuading everyone within earshot that I was insensitive at best, but possibly a racist hiding under my lefty reporter persona.

It happened almost 30 years ago, but I never remember the incident without my cheeks flaming. I see the face of a good friend, her expression a mix of horror and sympathy. She knew I didn’t mean to be that stupid. And I see the two African-American people at the other end of the table cast their gaze toward each other, then downward, resigned, but not particularly shocked.

I don’t want to say what I said because then people will begin to parse it. Oh, you were really making a joke about someone else’s racism. Or: It seems to me that the real butt of the joke was – No. I said something racist. In public, in front of friends and colleagues. In the continuum of racist things that people have said and regretted, I’d place it right next to saying an African-American writer is allergic to watermelon.

That, of course, is what Daniel Handler said at the National Book Awards Wednesday night. By Thursday, he had offered up one of the most straight-forward apologies of modern times. But he didn’t characterize what he said as racist, just as “ill-conceived.” (Editor’s note: on the morning of Friday, Nov. 21, Handler issued a second, even more straight-forward apology, stating, “My remarks on Wednesday night at #NBAawards were monstrously inappropriate and yes, racist.”) I don’t blame him for his initial reticence to use the word racist. No one, no one, ever admits to being racist. It’s an all-or-nothing thing. You are or you aren’t. My sister, who works for a big corporation, was once at a sensitivity training session where employees were asked to raise their hands if they had ever heard racist sentiments in their extended families. She was the only one who raised her hand. Doesn’t that seem . . . improbable?

In 2002, my eighth novel was making the editing rounds at my long-time publisher. In it, two cops, a man and a woman, both white, talk about interracial couples. The man wants to know if the woman would date a black man. Not someone famous he says – “like that actor they let win the Oscar last year” – but another cop, an ordinary guy. I received an e-mail saying that there was concern about this scene. It seemed unnecessarily rude to Denzel Washington to suggest his Oscar was the result of anything but his performance. Granted, they were two working-class white people, speaking confidentially to one another, long-time co-workers. But some people felt that it indicated I was a racist.

That’s all I needed to hear. I took it out. And regretted it because the scene, as written, was true to what I know about people, even nice ones. They sometimes say stupid shit. The nice people I know are so terrified of being thought of as racist that they insist that they never, ever, ever think about race. Never! Well, that’s a luxury, the cornerstone of white privilege. When I teach and students insist to me that they have transcended all stereotypical thinking, I say: “Have you ever been stuck behind someone on the highway? When you passed the drive and say that he or she was old, did it confirm a hunch? Then you’re a bigot.” (Oh, by the way, one reader once did write to inform me I was an age-ist because I had an older character who couldn’t use modern technology very well.)

The human mind was set up to categorize, generalize. It makes life so much simpler. I want to tell you that I never, ever think in stereotypes, but the more precise truth is that when I catch a stupid thought skittering across the surface of my brain, I send little villagers after it with torches. I check myself constantly, like a mother looking for deer ticks at the end of a camping trip. “What’s that? Is it a speck of dirt or something hateful, something dangerous?” You don’t want these stupid suckers to take root.

I am the mother of a young child going through a terrible phase. Our mornings and nights are filled with battles. Discipline is meted out. (Fair, consistent judicious discipline, OK?) A privilege or a toy may be taken away for a period of time. She begins to sob. “I want to be good now. I promise I’ll be good now. Can I be good now?”

I tell her yes, she can, but that will never change what has already happened.

Anybody else want to raise a hand? 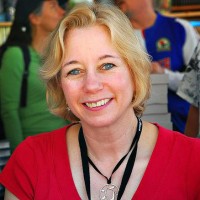 Laura Lippman is an award-winning crime novelist, most recently of After I'm Gone. She lives in Baltimore and New Orleans.