Gal Science: Tools, and the Scientists Who Love Them

My father was a fighter pilot. Because of this, I grew up never being able to enjoy any media that had anything at all ever to do with the military, planes, aviation, or space. There was always something done incorrectly for the sake of horrible, horrible Hollywood Magic. In true dad fashion, he couldn’t let Hollywood’s technical fibs slide.

“Goose never could have smashed into the canopy as he ejected! That’s not how the ejection sequence works!”

“For the love of god, put a tip on that pipet! Don’t dip it into that without a tip! DEAR GOD NO.”

“You were just handling somebody’s organs. Why are you wearing that same lab coat in somebody’s office? You have organ juice on you!”

I considered titling this piece “Ruining all representations of lab work in media for everyone.” It’d be like I’m giving you the Ring Virus*, but instead of watching a video, you’re reading an article. And instead of dying in a week, you’re just going to be slightly more critical of the cast of Bones when they use an Erlenmeyer flask instead of a volumetric one. Instead, I’m going to pretend that I have altruistic intentions, and explain that science is awesome, accessible, and a hell of a lot of fun, and there should be more descriptions of what scientists do in their everyday life. So, today, I want to give a basic overview of some of the various tools you may have seen people use when wet labs appear onscreen.

Stuff for measuring volume (or, separating the pipetboys from the pipetmen)

There are varying degrees of precision when it comes to volumetric glassware. To illustrate this, I took a picture of stuff I found in my lab.

From left to right, we have an Erlenmeyer flask, a Griffin beaker, a graduated cylinder, and a volumetric flask. They’re roughly arranged from most precise to least precise. In general, both the Erlenmeyer flask and the Griffin beaker are not to be trusted. If you see somebody on television using one of those two to measure volumes, they’re either very lazy scientists, or they know that the use of easily recognizable lab glassware is an effective way to communicate that science is happening.

Scientists can be a cavalier bunch. Before we figured out the mysteries of using things that weren’t connected to our lungs to create a partial vacuum to draw up fluid, we used to gather up and dispense small volumes of fluid via a process called mouth pipetting. This is when you take a glass tube, cram it in a beaker of chemical or biological mystery liquid, and then draw that liquid into the tube using mouth suction. Like you would with a drinking straw, except with benzene. Or a slurry of E. coli in a nutrient broth.

We have since come to the conclusion that this is insane. The brave new era of science includes a lot less practical mouth use, and a lot more disposable fluid transfer vessels.

The simplest member of the pipet family. These are just tapered glass tubes that you jam a little rubber bulb onto. They can be used to transfer small amounts of liquid to and fro as you please. They do not require any vigorous mouth action to operate.

Pipet controllers use a little motor to collect and dispense liquids. You cram a pipet into the handheld suction gizmo and use triggers to suck liquid up or shoot it out. The pipet is usually calibrated, so you can count on the gradations on the side to give you a reasonably accurate volume measurement. These are used pretty frequently for transferring fluids, handing blood, or breaking up goopy wads of centrifuged bacteria.

These are probably the most frequently mishandled scientific instruments you’ll see on TV. There’s even a Tumblr dedicated to this phenomenon. Pipettors can take up and dispense small volumes of liquid (0.1-1000 microliters) with great precision. They’re absolutely indispensable in modern microbiology and biochemistry labs (making them indispensable dispensers.) They show up pretty frequently in shows that deal with medicine or forensics, since biological analysis relies on instruments that can handle small volumes, and because pipettors look like space syringes, so it makes for good television. They’re not, though. They don’t have enough blinking lights or whirring sounds to be space syringes.

Pipettors are great because, in addition to the accuracy, they have disposable tips. This means you can simply put on a new tip every time you need to switch between samples without worrying about cross-contamination. People on television using pipettors without the tip is likely the number one thing that makes people like me cringe when I watch TV. Doing something like this contaminates the pipettor, throws off the calibration, and makes all of your coworkers hate you. Forever.

Stuff measuring mass (or, an excuse to photograph a chinchilla)

The Scale Scale (on a scale from more to less precise):

Analytical Balance: These guys can usually weigh samples down to the 0.1 milligram range with a reasonable degree of accuracy. Purchasing an analytical balance for home use usually indicates you are involved in drug manufacturing or trafficking in some way or another. Just keep that in mind.

Precision Balance: Basic lab balances generally handle things in the 0.1 gram to several tens of kilograms range. These are the ones you see most frequently in labs that aren’t doing heavy analytical or micro-/nano-scale work (like biochemists, microbiologists, etc.).

Kitchen Scale: These are used almost exclusively for measuring chinchilligrams.

There’s actually technically a difference between a balance and a scale. One day, I will learn what it is, and I will share this knowledge with the world.

Stuff for the picking up of things (or, my labmate just caught me taking pictures of this stuff and wanted to know what the hell I was doing with the hothands)

Tweezers, but marked up at least 800%. I once purchased a set of platinum forceps. For science reasons.

As far as I know, these have no other purpose than helping me pretend I am a Decapodian. I once saw somebody using them to pick up beaker of boiling liquid, but who knows.

Stuff for mixing, stuff for demixing

Vortexers are used for quickly mixing things. It’s just an oscillating shaft with a rubber cup on the end. You press your vial onto it, and the oscillation transfers from the vortexer to your solution, creating an awesome little tornado of mixing.

If you want to mix a solution, you can drop a little magnetic bar into it and set it on the stir plate. There is usually a rotating magnet inside the stirplate that causes the little magnetic bar to spin, thus mixing your solution without you having to do any actual work yourself.

Centrifuges rotate samples at extremely high speeds and are used to separate out solutions by density. More dense stuff moves toward the bottom of the sample, and less dense stuff stays at the top. Some real-world applications of this would be separating blood parts for analysis, separating material collected at wastewater treatment facilities to check contaminant levels, or determining the molecular weight of polymers. I also use them when I accidentally drop or mix stuff I didn’t mean to drop/mix.

Stuff for the putting of things

For the sake of sterility, a lot of the things we use in labs now are disposable, especially when working with small volumes. In the picture above, the first three items are microcentrifuge tubes ranging from 0.5 mL to 1.5 mL to 2 mL. The second two are conical tubes, 15 mL and 50 mL. The nice thing about plastic tubes is that they can be recycled. They’re shaped in such a way that they can be loaded into a centrifuge and the densest material gets concentrated in the little pointy part at the bottom.

A good number of the petri dishes used nowadays are also plastic, and they are used quite frequently for cell culture. You pour a solution of something that bacteria want to eat (frequently agar- the same stuff you can use to make vegan jello-esque foods) into the dish, let it solidify, then plop down a solution of bacteria. The bacteria grow into happy colonies, and you can then collect them or count them or do whatever the hell you want with them.

I hope that this article has helped you give a name to some of the miscellaneous lab things you have seen on television. Being able to point out even basic tools used by a given profession can help build a better understanding of what is going on and why. Overall, though, my main goal in this article was teach you the word “scoopula” and give you the tools to create an awesome drinking game/bingo card for any time you watch a television show that has even the vaguest potential to show a lab. To start, every misused pipettor is one shot, every on-screen scoopula is two shots.

*Did you know that, in the Japanese version of The Ring, instead of there being a happy resolution, they just showed the video to their grandpa because they figured he was going to die soon anyway? Totally brutal. 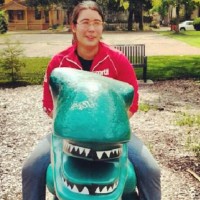 Anne is working toward a PhD in Macromolecular Science and Engineering. Her desk has a lava lamp on it.