Books for the Misanthropic Traveler

If it hasn’t happened to you yet, it will. He, and it will be a “he,” will attempt to catch your eye from the other side of the train. You will pointedly ignore him, concentrating even harder on the book in your hand, boring holes into the paper and yet not taking in a single written word. Time will pass, and then he will approach you. You will hear his shoes squeaking as he makes his way closer.

Maybe he’ll sit down. Maybe he’ll just loom over you like an irritating specter. And he’ll ask you, despite every facet of your body language screaming that you do not want to be approached, what he feels is not just an appropriate question, but one that deserves a warm response: “What are you reading?”

By the time he asks this question, you have already lost. You have failed in your quest to get from point A to point B undisturbed. This stranger, whoever he may be that day, will always be a threat to you and your peace, and books are a solid defense, but you must pick your weapon wisely. Like brightly colored beetles in the wild, the book-loving traveler can use her choice of reading material to give a clear message to anyone watching her: “stay away.” Here are some books that do just that.

A Book that is Not a Book, but a Household Object

Try once, instead of bringing a book on the bus, bringing a stapler. Really read that stapler. Examine its contours. Think about exactly how much effort was made to make this object that exists to bind other thinner objects together. NEVER take your eyes off the stapler. Form a relationship with the stapler. LOVE it.

Do you think you’ll get people coming up to you asking you why the hell you’re staring so hard at a stapler? No. No you won’t. Because they will sense that the stapler is more important to you than anything they could ever say.

There is something to be said for carrying around a copy of The Feminine Mystique with you wherever you go. It’s like carrying around a cross to ward off demons. People see you holding it and they immediately assume that if they ask you anything about it you’ll go on a long tirade about the Patriarchy and how the 1950’s ruined womynkind’s right to agency outside the home. It’s BRILLIANT.

Depending on where you live, though, you might need to bring in some hardcore RadFem Literature to truly scare people away. Try out Valerie Solanas’ SCUM Manifesto. The woman shot Andy Warhol; you don’t wanna mess with anyone trying to get into HER head.

Have you ever seen a lady read Fifty Shades Freed on the bus? You’ve probably wanted to sit as far away from them as possible, right? These women have unknowingly mastered a masterful technique for warding off passerby: treat the world as an extension of your bedroom or bathroom.

No, but seriously, it’s an interesting look into the mind of a disturbed man, you should read it.

Come On, You Might Say, Can’t I Just Read Game of Thrones?

Here’s how most conversations go when I am foolish enough to bring Clash of Kings onto an airplane.

Stranger: What are you reading?

Stranger: Oh, it’s Clash of Kings! Don’t you love it?

Stranger: Have you gotten to the awfully spoileriffic scene that changes the world of the book forever? Isn’t it great?

That’s when I hit the stranger with the book and I get dragged off by airport security.

The trick here is to position the paper so the text is facing you and not the train at large. This is not an invitation. This is a warning to anyone who is almost about to talk to you.

This is the only time I advocate responding to anyone who asks you the dreaded question: “What are you reading”? Show them the page detailing the night you lost your virginity, or the night you tried cocaine for the first time, or in the case of my diary, the five-page short story about riding a shopping cart around my school playground alone.

They’ll never want to look you in the eye, much less speak to you, again.

Not only are you a confirmed bitch with this choice, you also possess supernatural powers. This is, of course, the best position to be in at all times. 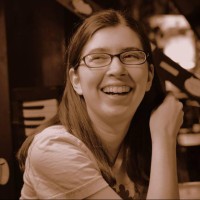 Hollis Beck is a Brooklyn-based writer and performer. Follow her on Twitter, or read her film and television reviews at For Your Inebriation.