I’ve always been a fan of adventures. As a girl growing up on the Great Plains, my earliest playtime memories are a sort of Little House in the Big Woods-meets-Xena mishmash. I was going to go on incredible adventures and consume the world with the kind of relentless tenacity that only prairie life can cultivate.

As I grew, my fondness for adventures did, too. I devoured books. I played Dungeons and Dragons. I got engaged at just 18 and moved from a small town in South Dakota to the urban sprawl of DC. Together, my husband and I traveled. We ate. We worked. We procreated. We said yes as often as we could.

And it paid off. After ten years of East Coast living, my husband accepted a three-year gig in Wiesbaden, Germany. We started to prepare our little family for ex-pat life and all the adventures that Europe had to offer.

We arrived in early autumn, folding ourselves into the changing leaves and crisp breezes along the Rhein. There were beers to drink, brats to eat, and castles to explore. I sat in a quaint cafe in Cochem and marveled at the cobblestones outside the window. In that moment, I was proud of how far I’d come. The little girl on the big prairie would hardly have believed that, months shy of her 29th birthday, she would be touring quaint towns and abandoned fortresses with her husband and son.

But as autumn quickly bled out, the romantic glimmer of life in Germany dimmed and November came on like a sudden storm. The days transformed from perfect, golden-lit gems that sat lightly on my spirit to dreary, wet cloths that hung heavy around my shoulders.

Despite being a stereotypical early bird, I found it harder and harder to get out of bed. Even when I got out of bed, I found it difficult to stay upright for an entire day. The weight of living pushed me down.

Having struggled with depression since my teens, I found it oddly difficult to quantify how I felt. It wasn’t quite like being depressed. It was like being buried alive. Or maybe like being stuffed with weird, happiness-absorbing cotton balls. Like something had taken up residence in my chest cavity and was feeding on my will to be.

New to ex-pat life, I tried to explain it away as being lonely. I just needed some friends, right? Maybe I needed to get out of the house more? Perhaps spend a little time away from my computer and my kid?

But how could I? The sun didn’t rise until we were well on our way to preschool drop-off, and collided with the horizon again before 4:30pm — on days when we saw the sun at all. For days — weeks — at a time, there would be nothing but clouds. No sunrays to glint off of the ever-present puddles. No afternoon light to illuminate my 2:00 pm coffee run. Just drippy, dank clouds that spat down at the sad, hard earth.

Each day, I resolved to find myself. Every day, I swore I would relocate my sense of adventure. And each morning, I was assaulted by these twisty thoughts that made doing easy things — things that I loved — so hard. I routinely ended dinner by crying on the floor of the kitchen, saying that I wanted to go home. That this adventure sucked, that it made me feel broken.

I really thought maybe I was going to evaporate or disappear. It never occurred to me that the darkness in my brain was a direct result of the darkness outside — I’d never lived so far north before. I couldn’t have known how the short days would short-circuit my brain. It wasn’t until February, when I saw a few headlines about how the winter of 2012-13 was the darkest-ever in Germany, that I realized just how overwhelming and conniving the onslaught of seasonal depression could be.

Now in my third (and final) winter above 50 degrees north, I am prepared to fight the onslaught of the German gloom. A SAD (happy?) lamp is my sidekick, and Vitamin D is my elixir of mental stability. The days are short and the nights are long, but — armed with a little knowledge and perspective — this battle has also become part of my adventure. Bring it on, Old Man Winter. 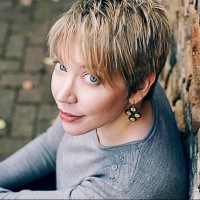 Liz Bauman is an American wife, mom, and writer living in Weisbaden, Germany. When she’s not camped out behind her computer screen, she quests for castles, plays Dungeons and Dragons, and drinks a lot of tea. Earl Grey. Hot. If you’re so inclined, you can learn more about her, tweet at her, or hire her.