Here were two highly intelligent people — he, an attorney, and she, an anthropology professor — discussing the location of their dog’s chew toy, instructions on accessing a locker where some ski poles may or may not be, and who’s going to clean the guinea pig cage.

Whenever I speak to friends, and ask what they think of domesticity, many say they enjoy living with their partners or spouses. They say they love the familiarity, the comfort, the movie nights. The ones who respond with complaints are always women, which confirms my suspicion that domesticity mainly benefits men.

My mother simply listened, patiently, never once talking or seeking support for the day she’d just endured, scrubbing counters and changing my sister’s diapers and cooking us lunch and dinner (both elaborate to some degree) and checking my homework and sometimes sitting at the piano to play — she is a phenomenal pianist. I used to wonder how she did it, until I went shopping for clothes with her. She loved fashion, still does — probably her ensembles and jewelry bring her unmitigated joy, the regality of them.

It occurs to me now, freshly unmarried, that my father being gone all day might have been something she enjoyed — the house to herself. And she could dress up in his absence and surprise him — really, to please herself — with a new skirt, a new bow of pink on her lips. This was the first relationship modeled to me. As a child, I took from it the lesson, early on, that women should always take care of their partners’ emotional needs and mitigate their own by shopping. Later, I took from it that women should have a home, bank account, and a dedicated creative space of their own.

There is a clear demarcation, in my mind, of when my last serious relationship — a marriage — began to go sour, and that was when we began to live with each other. How can two people remain romantically and sexually engaged and excited by each other when they have to have conversations about who will do the dishes, whether or not they need to pick up toilet paper, and the last time the car got an oil change? I hated coming home from buying lingerie, obviously carrying a bag full of bras and panties. In order to put the lingerie away, hoping to reveal it in a sexy way later at night, I had to wait for my then-husband to be out of the bedroom. In order to put it on, I would hide in the bathroom. During the reveal, he’d be reading a book about genocide and the cat would be taking up my space in the bed. Not exactly the reaction I’d hoped for.

This happened all the time. I would be putting on a bondage-style bra early in the morning while he snored in bed, or he would come into our bedroom while I was one foot in silk panties to ask where the toilet brush was. I never, ever want to talk about the toilet brush with someone I want to fuck. Ever. There is nothing less appealing to me.

The other conversation I hate having is the one about whether the romantic dinner you just went to with a beloved is giving you the runs. I’d prefer to be dropped off at my front porch with a quick kiss than to have to go in and have two adults rush to different toilets in the house and then reconvene in the living room, one of those adults already in sweatpants, to talk about how badly their asshole burns.

I’m aware that there’s an intimacy in that level of openness, which comes when you live with someone. But I’m willing to forgo that intimacy for the hotness of having sex with someone at their house, spending the night or not, and then coming home to my own messy or clean bed — no matter, so long as it’s mine.

I’ve heard the argument all the time — when you find someone you’re compatible with, you’ll want to live with them. Indeed, I remember a few minutes after their banal and snoozy domestic conversation, my attorney friend brought coffee to my anthropology professor friend while she read in bed. There are some wonderful things about cohabitating with someone, to be sure: shared kindnesses. Someone to change the water in the flower vase. Someone to buy you flowers to begin with. Someone with whom to throw some of your underwear in the wash when they do the laundry. Someone to make you tea. But in the end, I would rather buy myself flowers, wash my own underwear, make my own tea, and have a lover stay over and leave in the early afternoon, so I can miss them.

When I read Laurie Anderson’s farewell to Lou Reed, I was swept up in what seemed to be a gorgeous artists’ union: She and Reed played music together, critiqued each other’s work, studied together, swam together, traveled together. What they did not do was live with each other. It’s in a tiny clause in a long sentence in Anderson’s farewell, that they did everything together, including sharing “a house that was separate from our own places.” Brilliant! Jean-Paul Sartre and Simone de Beuvoir were married 51 years and lived apart. Frida Kahlo and Diego Rivera famously lived in separate homes connected by a bridge. Montaigne and his wife lived in a castle with two separate turrets. He did not bother at all with domestic issues. He was too busy writing essays and riding his horse or something.

Maybe that’s the only way for people like me to do domesticity — to not do it at all. 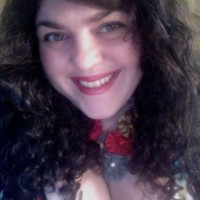 Randa Jarrar is the author of a novel, A Map of Home. Her work has appeared in Salon, The New York Times Magazine, Oxford American, and others. You can follow her @randajarrar.