Avery Edison’s previous work for The Toast can be found here.

I powered through my copy of ADAM in one sitting, a testament to both Ariel Schrag’s enthralling writing and the emotional resonance of the story. ADAM is about a guy named, well, Adam. He’s in high school, his sister is in college, and during the summer he goes to visit her in New York. She’s queer, and her friends are all queer. Adam isn’t. But that doesn’t stop him from masquerading as a female-to-male transgender twenty-something in order to get a (lesbian) girlfriend.

What made me so excited about reading ADAM–besides having enjoyed Ariel Schrag’s previous seminal comic works Awkward, Definition, Potential, and Likewise–was that the book is set during a such specific time in queer history. The use of social media as a tool for dissemination of social justice philosophy and terminology has created a newly articulate liberal youth culture obsessed with tackling just how we discuss and learn about LGBT and queer-adjacent issues. Everyone in ADAM speaks like the people I know, and the pages are replete with almost-verbatim transcripts of conversations I’ve had with friends as we tried to figure out our place in the rainbow. Consider these two unnamed charactrs in ADAM discussing The L Word:

“Ok. I’m sorry,” said someone on the couch. “But we need to talk about Max’s facial hair.”

“You mean the Brillo Pad glued to his chin?”

“That shit wouldn’t look normal on a bio guy.”

I think we’ve all had similar thoughts about Max’s beard.

These conversations, and the people having them, felt real to me. As a transwoman and lesbian, realistic depictions of these kinds of conversations are incredibly powerful. There’s so little accurate and honest representation for queer youth–and, frankly, queer adults–that to find a work that spoke to me so much was revelatory. I didn’t necessarily like or agree with everyone in the book, but I could identify them, and identify with them. The mistakes that even the likable characters make when discussing transgender concepts might help both transpeople and cisgender folk alike.

That’s absolutely down to the fact that Ariel Schrag is herself a lesbian, and is writing about scenes she has been and is still immersed in. There is no condescension here, no guessing as to what “the kids today” are thinking. Schrag was one of those kids just yesterday, and the realism she’s able to bring to her writing is distilled from her own life experience.

This specific place in queer history also gives the story its engine–the transgender ruse. I don’t know if this is a book that could have been written even just five years ago, because the recent rise of transgender personalities, stories and issues in the zeitgeist has been so sudden and fast. Over the past few years, society has seen a certain level of trans visibility, coalescing around people like Laverne Cox and Janet Mock, shows like Orange is the New Black and Transparent, fights over transgender inclusion in ENDA, and a slowly growing awareness about the harassment and violence transgender men and women (and non-binary individuals) face. ADAM explores with care and humor how this slightly more assured place trans folks have in today’s America affects both the people at the heart of these issues–like Adam’s sister Casey, a lesbian who begins dating a transman–as well as straight individuals like Adam, who are hearing and learning about this stuff for the first time.

Adam’s reaction is a microcosm of the negative consequences the increased attention on transgender lives has had. A straight, cisgender man, he almost-instantly co-opts the transmasculine identities of the men he is introduced to, presenting himself as a transman in order to get a girlfriend. Throughout the book, Adam does wrestle with what he’s doing. But, like a true seventeen-year-old, he just can’t stop himself.

…the anxiety over “the trans lie,” which he’d been trying to ignore, had reared up again, and by Tuesday night it was all he could think about. Casey always said, “Trans guys are real guys.” So if that was true, then by the symmetric property, shouldn’t the reverse be true too? Was it really a lie? I mean, yes. It was a lie. But how big of a lie? Adam wanted to run to Gillian’s apartment, bust open the door, and yell: “I’m not really trans! I’m only seventeen! But I think I love you!” And she would laugh and smile and tell him it was OK, and they would fall onto her bed and have sex. He wanted to tell her so badly. But he couldn’t.

As gripping as the story is (and it really is riveting–I was practically white-knuckling the book for the last third as my anxiety over Adam getting “found out” mounted), it’s also hard for me not to draw parallels with this “transploitation” (a real term that people use, which I’m not sure I’m comfortable with) to the publication of the book itself. While Ariel Schrag has a well-established and unquestionably deserved place in queer culture, she is still a cisgender woman, and her use of transgender identities and concepts to tell a story is another in a long line of non-trans people hijacking trans stories. Other recent examples include projects such as Dallas Buyer’s Club and the previously mentioned Transparent, so there is at least some freshness in the work being centered around often socially invisible transmen for once.

But I don’t begrudge Schrag for writing this book, because the writing itself is so authentic and positive. This isn’t a damaging portrayal of transgender identities, like the classic example of the murderer Jame Gumb in Silence of the Lambs; it’s a very human examination of what it means both to be trans, and to be someone trying to understand trans people.

In that sense, Adam makes a great audience surrogate. The largest audience for this book (as with any book) is cisgender, and so many cisgender people are unclear or uncertain about the whole transgender world. Adam enters this world completely in the dark, and his journey into awareness and, later, experience is an easily understandable one. I genuinely think ADAM can be a useful educational tool.

I was disappointed by what came across, to me, as skirting an important issue, but I think the rest of the book more than makes up for the last dozen-or-so unsatisfying pages. I recommend ADAM with the proviso that endings are hard, and it’s not always possible to be completely strict about social responsibility when writing a story like this. Seriously addressing the consent aspect of the story would have required a sharp tonal shift that might have made the work seem disjointed or unapproachable.

ADAM has lingered in my mind in the months since I finished it. The novel gets so much right in a way that few queer stories do, showing the way transgender dialogue has quickly evolved in the queer community, the discussions that happen between people who “know” and people who don’t, the coming-out process, and the effects transgender people can have on the sexualities of other queer people. It’s all starkly and accurately represented, and there was not a moment in which I was not entertained. I think it’s a valuable book for everyone–queer or ally, trans or cis–to read, particularly as a model for bridging the divisions that often plague the intersection of minority communities.

ADAM is funny, and truthful, and unflinching, and sexy, and harsh, and fair. It’s almost everything I could ask for in an LGBT novel right now. I thoroughly recommend grabbing it from your nearest bookseller. I hope you come away from it with the greater appreciation for transgender narratives that I think we should all hope for and seek out. 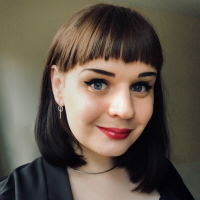 Avery Edison is a comedian from London, England. Her humor writing has been featured on McSweeney's, Slacktory, and the Bygone Bureau. She makes jokes on Twitter for you every single day.