Woman was a story I told myself. A girlhood shaped by poverty, running wild on the narrow streets of a city in another time zone. It was the raised paint polka dots on a dress I wore, like bruised lips from not enough kisses and even the pall of hunger. There is a wildness, tucked between chin and chest, lonely girls who stand and sway to the music, alone in their rooms. Watching their girl hips switch in the mirror. Back and forth, back and forth. Their eyes on the clock. Watching the time pass.

Loneliness can temper a girl. But sometimes it just makes her feral.

When I am a woman, back walking down familiar new streets, I keep my shoulders covered. My shoes always have a hint of heel. It is how all shoes in all the stores are made. I find the lowest heel on a pair of leather black boots that come up to my knees, a small brass buckle flap on the outside of each leg, the clasp clasping itself. A holding. There is a tenderness, a softness, a hiding pleading. It is a sound like the way hands run up the small of your back. It is the way that you breathe when you sleep. Soft, push, soft, push.

It is 2011 when she dies. Amy Winehouse. The one who could have been you. The one who says, “The worse my day is, the bigger my hair gets.” You know about big hair. You know about bad days. She is your age. You think about red shoes, dancing to death. Devils and doorways and piles of black ash. She is dead. You see her small body, long slender limbs, all folded into itself. You hear her big voice, see her shaking and wavering on the stage, her voice big, her body barely twitching. You remember her. You watch her. There is music. “Back to Black.” “Valerie.” “Do Me Good.” It is because she is your age and because she could have been you that your eyes snap to attention when news of her death floods the headlines.

There is a fierce, sullen, furious, forlorn sadness and grief when you read about it. She is your age. She is older than you only by months. You see the men standing away from crowds, their eyes unreadable, their faces hidden and contorted from suppressed emotion. You watch them lay flowers at the gate to her apartment building. You see the people crying. You watch her shrink before your eyes. You hear her sing “Rehab.”

You don’t drink. You’ve never been drunk. In college the boys watch you dance on the dance floor and ask, “Are you fucked up?”

No, you say. No. Just dancing. Dancing. They cannot imagine your body moving so well, so beautifully, without being intoxicated. They cannot imagine your folded hands and demure manner in any way other than closed, other than inaccessible, other than what is free. You are free. You always know this. You know this when you feel the music thrumming in your chest, making your lungs ache without pain. The way your fingers start tapping the air and your arms start swaying to the music, in the darkness, in the heat of bodies standing near you. You watch them burn their noses on candles, you listen to them play their songs for sex. You observe.

You think about how vulnerable we are. How you could have died that April in San Francisco. How you could have died that May in San Francisco. How you almost killed yourself for the novelty of listening to your mother’s voice on a cell phone. For the novelty of being able to call her on a cell phone. For the local call to reach your mother. For the mother. For novelties. For all of the risen and fallen that calls itself life. For all of the dramatics and histrionics of what they call love. For the thrum of biology. For the hum of loss. For the desperation of need. For family. You claim her. You claim Amy Winehouse. I could have been her. I could have died. You remember this. You watch her carefully, inspect the expressions on her face, the thick black eyeliner, the eyelash extensions, the piles of black hair on her head. You wonder was she happy. You wonder if anybody looked out for her. You wonder if she wanted to die. 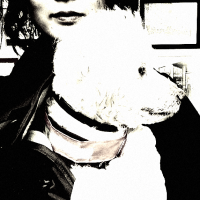 Soo Na Pak is a writer and artist living in the San Francisco Bay Area. Her essays and prose appear or are forthcoming in The Rumpus, AlterNet.org, Outsiders Within: Writing on Transracial Adoption (South End Press), Hamilton Stone Review, and Digital Artifact Magazine.