The Winter of My Discontent: On Seasonal Depression

I don’t usually write about depression.

I used to be on anti-depressants. I started them around the end of my first marriage. I was prescribed Prozac, the standard generic pill of the time. The problem was, I didn’t have health insurance. Yet I found a way to prove to the City of Alexandria how broke I was, and saw a shrink once a month who would refill me for another 30 days. Once I was employed and once again deemed worthy of insuring, Prozac turned to Lexapro to Zoloft to Effexor. That last one was the killer. The shrink I had just kept upping the dosage every month.

Life was going downhill fast with a dad, a father-in-law, and a brand-spanking-new husband all in various stages of chemo for a variety of life-threatening cancers. They say one in three die of cancer. In this lottery, number three was my dad. The shrink just kept doubling the dosage. Until one day I went to a doctor with a headache and they discovered my blood pressure was “in stroke territory.” (It must have been bad. The nurses stared at me like I might drop dead on them any second.)

Dying seemed like a bad idea, so I weaned, brain shivers and all. This fall marks the first time I haven’t been on any selective serotonin norepinephrine reuptake modulating stimulators, Tricyclic, Tetracyclic, Monoamine or otherwise. And I was okay! I was eating well, exercising, and even finding time for hobbies. It was all going swimmingly, until we reached Halloween.

I have always hated the end of Daylight Savings Time. But I never knew until this year why that was. Sunset at 4:30pm hits like a ton of bricks, and there’s still another thirty minutes left before I have to go sit in cold, dark traffic to fight my way to the suburbs. Suddenly the exercise routine I was so proud of myself for starting after the horrors of last year seemed like too much, and I abandoned it just as I had during the first week of November for the last three years running. My knitting projects, the ones that have a hard deadline at the end of December? They’re turning into cat beds. They turned into cat beds at this time last year, too, and I blamed the weaning and the cancer. They turned into cat beds two years ago too — I forget what the excuse was then. But there is always an excuse.

What really brought it home was when we went to a dinner party hosted by my lovely foodie friends. It was 5pm on a Sunday night. I was looking forward to it Saturday, during the day, when I shopped. I was looking forward to it Sunday, during the day, while we prepped. And then the sun set at 4:30pm, and I didn’t want to go. Go out? What was I doing? I didn’t want to leave the house. I wanted to curl up in a ball and cry myself to sleep. I couldn’t go. It was too much — far, far too much — to ask me to get in a car and go somewhere so very late.

So very late? My husband glanced at the second round of football, just starting. Our racist-ass team hadn’t even taken the field yet. What was wrong with me?

I’m sure I could go back to a doctor, and maybe another shrink. They’ll tell me I have SAD, the worst fucking acronym for something that makes it so you’ve ceased to function. Seasonal Affective Disorder? Clearly a phrase invented by the same asshole who named the Strategic Homeland Intervention, Enforcement and Logistics Division. You haz a sad. Here, haz a druggie.

But drugs don’t stop it. They only mask it. The treadmill still gathers dust, the food in the fridge rots, and I get home so incredibly late at night at 5:45pm and crawl under the couch blankets by 6pm because I can’t possibly be expected to do anything when it’s so dark out and so late at night and everything is so awful.

The worst part is, no one takes me seriously. Heck, I don’t even quite take me seriously. How can I take an illness seriously with such a stupid-sounding acronym?

There’s a lady in our office with a sunlight lamp. She paid for it and brought it in herself. But she sits towards the back, with layers of cubicle walls between her and any windows. Somehow that makes it okay, sort of, though there are still coworkers who refer to it as “her hippy dippy light.”

We are a progressive office. There are yoga ball chairs, standing desks, a liberal work-from-home policy, and a tendency to hire people who live very close to the office so everyone can walk/bike to work and reduce our collective carbon footprint. But when I asked if I could have a sunlight for my desk, I was turned down. After all, I sit by a window.

How does one explain the window is the problem? I sit by the window, and I watch the cold and the dark take over the world every day as I age under fluorescent waves of sadness. All I can do is count the days until March. 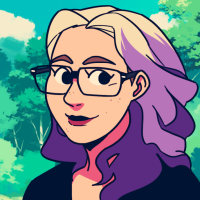 Ani Bundel is news editor at WinterIsComing.net, and can be found writing about fashion, TV and nerd culture at Anibundel.com. An anglophilic pop culture junkie with a penchant for snark, all her posts are approved by her cats.