How To Tell If You Are In A Virginia Woolf Novel

Previously in this series: How To Tell If You Are In A Victor Hugo Novel.

You are fifty, a little frail, and the meat of your life is gone.

You haven’t shared a bed with your husband in years, thank God.

Your youngest son comes to you in tears and you know just what to say to soothe him. Taking the torn rag doll from his grubby hands, you promise to mend it by morning and feel, suddenly, a tremendous and expansive peace.

Men talk about India while you finger the hem of your dress. You should have worn the blue.

The jacmanna is in riotous bloom.

A languid young man, holding a cigarette between two tapered fingers, gives you a knowing look.

You are darning a pair of hose, though you have help for such things. You like to be useful.

You have at least one artist friend. You admire him deeply but don’t quite understand him; in certain moments, you fear you lack his courage.

Years ago, Susan, color high in her cheeks, took you tenderly by the hand and led you down to watch the moon rising over the bay. It was the greatest moment of your life. The next morning you became engaged and you never saw her again; you hear she married a duke, grew fat, and moved to the countryside.

The crashing waves remind you of your father’s squandered career. Also of a woman you knew once, dressed in white and laughing on the stairs at the Albertsons’ party; the relentlessness of the passing days; and, always, England, enduring.

Your husband is lunching at the club again. You press a hand to your forehead and fleetingly, absurdly, think of Louis.

At Harrods, you are torn between buying the gloves and slipping into an abyss of regret.

Perhaps you have stared too long at the elegant woman across the hall. Perhaps, specifically, at her parted lips?

In the pause between one sentence and the next, you consider the whole scope of your life, from girlhood until this very moment. The man with whom you are speaking presses on, unaware.

You are struck by anxiety at the edge of a party. Julia stands in the center of a group of admiring men, more sure and beautiful than ever, and you want more than anything to be alone beneath the beech trees at Harwick House.

A man says something unkind to the young scholar seated beside him. You are in anguish.

The maid narrows her eyes when you ask her to delay the roast. You are in anguish.

Your daughter comes in late, flushed from the summer rain. You are in anguish.

After all this time, Giles has written you a letter.

Your servants are nervous around you, but only because they love you.

Someone dies. Later, it becomes clear that he was your dearest friend.

A brilliant but humorless man is trying to engage you in conversation. You pity him, and smile encouragingly. 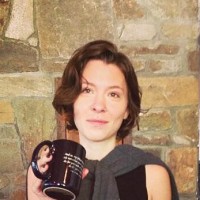